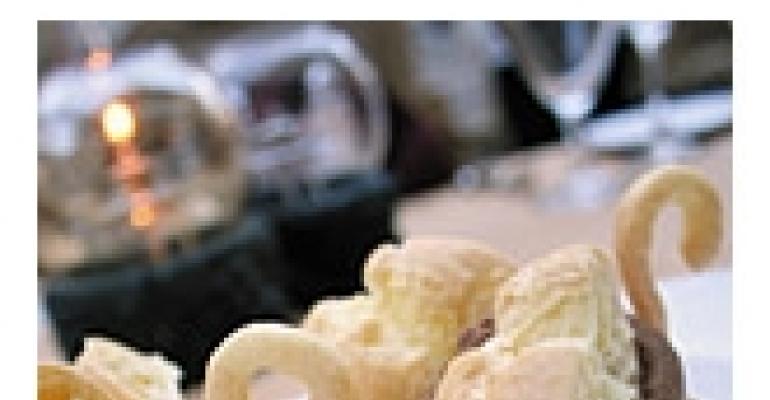 FORMAL dinners have old-school flair, but how do you serve them to the food-savvy fun-seekers who make up today's special event clientele? By incorporating lighthearted elements while still retaining the evening's sense of gravitas. In fact, most chefs agree, while small plates have their place, formal dinners remain king for an evening of true indulgence. Warren Schwartz, executive chef of Santa Monica, Calif.-based Whist, located in the Viceroy hotel, puts it this way: “People love to have a purpose to dress up, enjoy etiquette and wit, and dive into a multi-course meal with wine being poured into appropriate stemware.”

Still, there are many factors to consider when making menus for formal dinners. While vegetarian menus used to be one of the few alternative diets around, now chefs have to contend with a long list of special requests, from vegan to nut allergies. Most chefs are up to the challenge, turning out masterful, made-to-order formal dinners, both fun and dignified.

When describing the appeal of the formal dinner, Marc Suennemann, resort executive chef of Chateau Elan in Braselton, Ga., says clients often opt for a sit-down meal for awards nights they host because “they want to have something special.” Another, more basic reason he cites for declaring an evening of fine dining is to “make sure that nobody comes in jeans and a T-shirt.”

One such formal dinner Suennemann created included such innovative dishes as tortelloni with porcini mushrooms added to the pasta dough for a “nice earthy flavor” served with essence of wild mushroom and truffles. The second course was “a tuna trilogy,” which included tuna tartare with marinated asparagus, tuna carpaccio with micro greens as well as a seared piece of tuna. The third course was a lightly smoked duck breast with butternut squash risotto and Seckel pears, which he describes as “baby pears,” poached in Pinot Noir. Granny Smith apple and cider sorbet served as a palate-cleanser, followed by an entree of filet mignon with wilted mountain greens and candied sweet potatoes au gratin with a Cabernet reduction. For dessert he served what he calls “two swans on the pond,” made with a pâte à choux dough, the same dough used for cream puffs. For this playful creation, he fills one “swan” with white chocolate mousse and the other with dark chocolate mousse.

As for special diets, Suennemann says there are “lots of vegans always around,” so he's accustomed to cooking for them. And while he and his staff generally prepare the meals themselves, in certain instances he calls for backup, as is the case with kosher meals, which he orders from a company based in Atlanta to ensure the preparation meets kosher standards.

Shelley Barac, catering sales and group services manager of Vancouver, British Columbia-based Opus Hotel, says, “Small bites work well with larger groups looking for a more social atmosphere.” Yet, she adds, “Formal dinners will always be favored by those who are looking for something intimate.”

For one such formal meal, Opus Hotel served an amuse-bouche of oxtail consomme with black truffles and foie gras; a first course of roasted scallops with a lightly curried parsnip puree and a pomegranate, grape and lime vinaigrette; a second course of roast suckling pig with apple tarte Tatin and Calvados sauce; a third course of veal tenderloin wrapped in serrano ham and a fricassee of crayfish and artichokes; a comte cheese course; and a dessert of pavé of chocolate with caramelized macadamia nuts, bitter chocolate pearls and honeycomb.

While free culinary rein is certainly fun for chefs, special requests often pose learning opportunities to even the most seasoned kitchen guru. Recently, a well-known musician requested of Opus Hotel a “raw food” meal, which Barac describes as a culinary preference for those pursuing “a plant-based, vegan lifestyle.” For this style of preparation, food is not heated above a certain temperature, typically 92 to 118 degrees Fahrenheit. In making this meal, Barac says, “Within a week, our chefs learned the art of ‘preparation’ of raw food and were told it was the best our guest has ever had.” The menu included parsnip, apple and black truffle soup; quinoa and grape salad; and roasted whole Vidalia onion stuffed with whole-wheat couscous.

And Barac offers this piece of general advice for formal dinners: “High-end food must always be complemented with high-end service.”

Carl Cyr, director of meetings and special events at the Ritz-Carlton Resorts of Naples in Naples, Fla., says while tapas is popular for “‘pre-’ nights,” often an event culminates with a formal meal. The Ritz-Carlton has different methods to make guests feel at ease in such an environment. As Cyr says of such dinners, “We keep them formal but make them fun.” This includes James Bond-themed events and kid-friendly fare with separate menus and buffets that are set low and specially decorated for children. Yet, there is always an element of formality to these evenings as well. At the Ritz-Carlton, plated meals are hand-carried with all guests at a single table served at once.

A base menu created with dietary needs in mind makes special requests easier. For instance, the Ritz-Carlton's pesto sauce and minestrone are made without pine nuts for people with nut allergies. As for Cyr's favorite menu, he likes the Moroccan-themed, four-course dinner event the hotel once hosted. The meal included chicken tagine — served in authentic individual ceramic tagine vessels — roasted tomato soup, lentil couscous and an array of sweet desserts, green tea and Arabian coffee. For a final touch, Cyr adds, “When [the guests] returned home, there was the authentic tagine in a gift box along with a thank-you note for attending the event.”

Who generally prefers formal dinners? “Everyone,” Schwartz says. “Just the ones with more money tend to enjoy them more often.” One of his favorite menus was a seven-course dinner created to highlight wines from nearby Malibu wineries. It included rabbit hash with foie gras, braised lamb shank with fava beans and caribou with a cherry reduction, and potatoes cooked in duck fat. The meal turned into a beautiful, intimate time with friends: “This warm night in early fall, with leaves turning yellow, the tables set on the patio and all the winemakers present to talk about their wines proved to be a perfect event,” he says.

One of the more unusual requests Schwartz has received was a party that wanted to start with dessert and work their way backwards through the meal. He says, “I still think they were crazy, but I admire the spontaneity and willingness to try something different.” In fact, Schwartz believes, “The true fun in formal dining is spontaneity within structure.”

As for special diets, Schwartz claims to have “done it all.” A single special dietary request doesn't faze him. Instead, “The real difficulty is when just a few people want something a certain way, and it affects the whole dinner party,” he says. “How do you work your way through a meal when one guest does not want onions in anything, one guest does not want butter — only olive oil — another will not eat carbs, and the host's wife does not like seafood?” His response: “Very carefully … and maybe a drink of wine for yourself before the meal.”