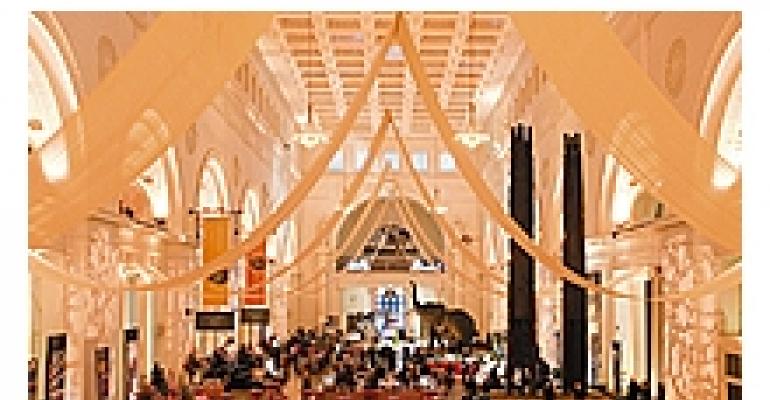 TWO 3,200-guest receptions, one sit-down dinner of the same size and a raft of specialty bars, stations, passed hors d'oeuvre and cocktails — sounds like an elaborate fête for an opulent monarch. But this week of king-size events observed the 75th anniversary of a financial services company. The Chicago-based firm chose Chicago stalwart Blue Plate to provide 3,200 guests with impeccable food and drink for multiple days of feasting.

The festivities kicked off on Sunday, Aug. 6, with a reception for 3,200 guests at Chicago's Union Station and continued on Monday with a sit-down dinner in Millennium Park followed by a concert. Tuesday, employees enjoyed cruises and snacks from Blue Plate. The celebration ended Wednesday with a 3,200-guest reception at the Field Museum. Blue Plate managed the mammoth project with a capable staff and more than 1,400 pounds of seafood.

Once Blue Plate committed to the event, management immediately launched an elaborate menu analysis. Blue Plate president Jodi Fyfe says, “When you're planning an event like this, you have to lay out what you're going to serve at each event and then cross-check to make sure you're not serving the same of anything.”

One of the week's high points was the sit-down dinner for 3,200. “I don't think many people have done that,” Fyfe says. “And to do it in the requested time frame of one hour and 15 minutes — in the beginning, we thought there was no way.” Keeping the quality of the cuisine high despite the massive quantities required was among the challenges the team faced for the meal. “The quality of food had to be consistent from the first plate to the 3,200th plate,” Fyfe explains. That meant each serving of tenderloin weighed 8 ounces, and each serving of lobster scampi came in between 8 and 10 ounces.

Along with caring for the 3,200 guests of its financial services client, Blue Plate serviced its regular client roster during the anniversary events. Fyfe says that boosting staff levels was key: “We ended up running two to three different shifts from Aug. 3 through the 9th. People worked throughout the evening to produce the amount of food we needed.” Other concessions to the preparation of food included the construction of extra space. “We had to pitch a tent on the side of our building for two weeks,” she adds.

With 1,000 employees working the Millennium Park dinner, Fyfe cites the staff's positive attitude as one of the reasons the event worked. “It was a challenge and it was a bunch of people working together,” she explains. “You couldn't pay for someone to feel that {community spirit}.”

Fyfe reflects that she would have liked more time to prepare for the Millennium Park dinner; the Blue Plate team came in at 3 p.m. for a 5:30 p.m. meal. “It was just really tense getting the tents erected, linen down, the water poured,” she admits. “I was ready to crawl in a hole and cry.” In the end, all events came together seamlessly, a feat Fyfe credits to her employees. Completing the nearly weeklong event gave the company “a huge sense of accomplishment,” she says. “Now we feel there's nothing we can't do!”