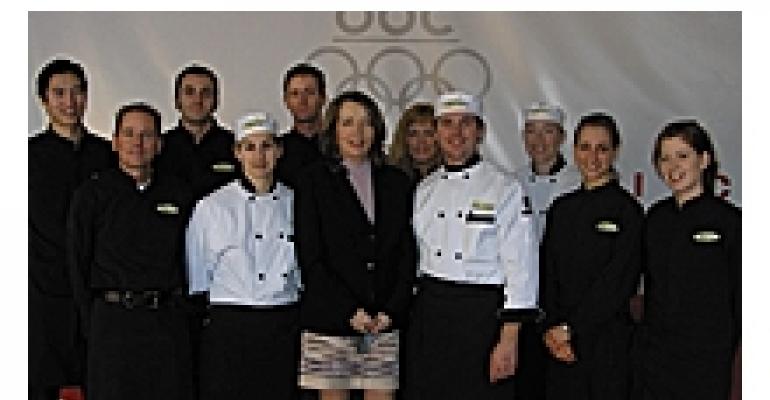 ALONG with athletes giving it their all at the Winter Olympic Games in February, a catering team was also striving to show off its best — Culinary Capers Catering, a 20-year-old company headquartered in Vancouver, British Columbia. President Debra Lykkemark and team won the bid to offer catering services at British Columbia-Canada Place in Torino, Italy, a state-of-the-art exhibition space that hosted journalists, athletes, tourists and dignitaries while offering a taste of Canada before the 2010 Winter Olympics in Vancouver. From mid-January to March 1, Lykkemark had as many as 10 of her staffers in Italy, offering the distinctive cuisine and warm hospitality of Canada's West Coast.

What was the scope of the job?

DEBRA LYKKEMARK: We did 42 events at B.C.-Canada Place. Many of them were showcasing the province and the different municipalities making up the lower mainland of British Columbia. We also did parties for the coaches and athletes for Speed Skating Canada and Hockey Canada, as well as for corporations that support the games, such as Bell Canada and Petro-Canada. There was also a series of business development luncheons and receptions organized by the Canadian consulate in Italy. Most of our parties were cocktail receptions for about 150 people; there were some days where we did up to six events in the facility. Our menus were a nice balance of West Coast-style hors d'oeuvre, Italian antipasto and Asian-influenced hors d'oeuvre, as Vancouver has a very large Asian population.

Q: Did you take along any special equipment or foodstuffs?

A: We brought smoked salmon, wild rice, sun-dried berries, maple sugar and maple syrup. It was very difficult to bring product in from Canada, so we sourced most of what we needed locally. We did a lot of shopping at the local market, which is the largest open-air food market in the world. We also found an incredible wholesale supermarket where we got incredible prices and selection.

We brought linens for the tables, as the linens we could get locally were very traditional. I couldn't find quality rental glassware, china or linen in Torino. I went to Milan and rented glassware, beautiful flatware and some very nice square plates. But linen was available in only five colors, all patterned and all squares. It was just really boring. Our rental companies in North America are way ahead.

Q: How did this project work as an experience for your team — was it a reward? Was it hard to talk anybody into doing it?

A: To me, the key thing was to take people with a really good attitude, lots of stamina and who could multi-task. We didn't know if we would be twiddling our thumbs or working 18-hour days. They had to be ready to step in — washing dishes or bar-tending or making floral or helping with kitchen prep.

They also had to be prepared to live in tight quarters. We had five people in one apartment and four in another. I told them, “This might be the toughest thing you ever have to do, or it might be the most fun — I don't know which.” I was very fortunate in the team that I picked, because it turned out to be a lot of business. We were really busy every day.

Q: Did you have to turn down work back in Vancouver to do the Olympics?

A: No, we carried on with business as usual. We have a large management team that easily handled things at home. I think this is key to being successful in the long term. If your company is not strong enough to take good care of your customers at home, you will end up losing some of your clientele to other caterers if you have to turn down business or if you take business at home that you cannot handle.

Q: How is your work in Torino shaping up as a marketing opportunity for your company?

A: I think there has been a lot of buzz about it. We definitely bumped into customers there, who were there entertaining or were guests themselves. I really think it will turn into future business up to the {2010} Olympics, and we are looking already at trying to get to Beijing {2008 Summer Olympics}, working with some customers to get to do that. I think we can.