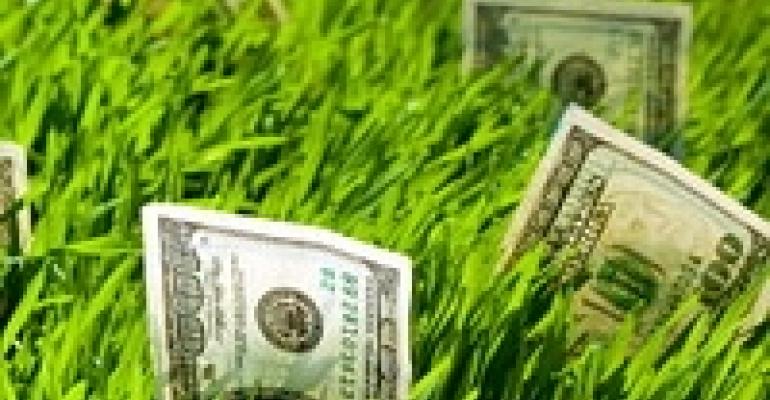 Many caterers agree that going green—cutting waste, saving energy and the like—is the right thing to do. But does it pay off in more than good will? For Catering Celebrations, it has—to the tune of $10,000.

Valerie Vollmer, CPCE, head of the Westlake Village, Calif.-based company, landed a $10,000 voucher this summer from office supplier Staples after submitting the winning essay on how she operates her business in a eco-friendly way. She is using the funds to update her "antiquated" office, she says.

Other caterers are also finding that going green pays off in real green.

Marketing director John McPhee of Miami-based A Joy Wallace Catering Production and Design Team says that while it's hard to pinpoint a precise figure, his company sees "significant" savings thanks to its green practices.

"We recycle paper and cardboard in our office and commissary, in addition to creating policies to limit the amount of printing we do in-house," McPhee notes. "Our IT director says that our savings on printer ink could be in the thousands of dollars a year. Although we leave most of our PCs on at night for backup and updates, turning off our dozens of large LCD monitors saves us up to $100 month. During our slow summer months, we transfer our perishables to one of our smaller walk-ins and turn our large walk-in cooler off."

Affairs to Remember Caterers is Atlanta's "first zero-waste caterer," notes general manager Patrick Cuccaro. Though its aggressive approach to both composting and recycling, the company has reduced its landfill deposits by 83 percent.

Though the green practices themselves—such as cutting energy use and trash-hauling costs—tend to be revenue-neutral, Cuccaro says, the big payoff comes from green-minded clients. "We definitely pick up more business as a result" of green practices, he says.

One of the green innovations from Affairs to Remember is its 100 percent compostable meal box; "Everything in that box can be thrown in the compost bin," Cuccaro notes. Three weeks ago, his company sold 3,300 of the compostable meals for a green concert in Atlanta. "The client paid much more than they paid a competitor last year because of our ability to 'walk the walk' with them," Cuccaro says.

Steve DeAngelo, president and owner of DeAngelo's Catering and Events in Tigard, Ore., tells a similar story. His company put green elements into its mission statement back in 1998, and "Our business went up 25 percent due to offering greening of events," he says.

Alexandria, Va.-based Windows Catering Co. is officially a Green Certified Restaurant thanks to practices such as installing valve-regulators on all its sinks to cut water use and investing in energy-efficient appliances. With a client base keenly interested in vendors who work green, "We have closed over $100,000 of additional business in the past three months because our of eco-friendly certified practices," notes marketing manager Brianna D'Amico.

The "Go Green" campaign launched by Vancouver, British Columbia-based Culinary Capers Catering in 2008—which establishes procedures to reduce waste and save energy throughout the company—was a bigger winner when the 2010 Olympic Winter Games rolled into town.

"The 2010 Vancouver Olympic Games Secretariat had a clear mandate of sustainability for any company replying to RFPs and RFQs for their Olympic catering needs," notes Culinary Capers spokesperson Carla Fellicella. Culinary Capers scored gold with both Olympics organizers and major sponsor clients, who demanded sustainable practices. Felicella adds, "We were successful in procuring enough contracts to have the busiest month in the 24-year history of our company.