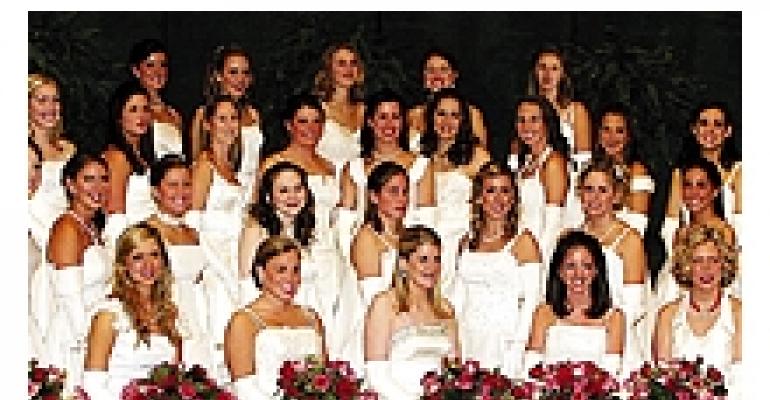 TRADITION typically reigns supreme at debutante balls, yet these events still maintain a modern-day allure. Debutante balls, also known as cotillions, originally were intended to introduce girls dressed in extravagant white gowns to society. Now the balls often serve as fundraisers, with most taking place during the Thanksgiving or Christmas holiday seasons when the young ladies, who are typically freshmen or sophomores in college, return home from school.

An evening as carefully orchestrated as a debutante ball requires a similarly thought-out menu. Four hotels servicing cotillions share their different takes on providing a dining experience for an evening of dancing, drama and bustling white gowns.

While the girls in New Orleans practice their curtsies, the Adam's Mark Hotel St. Louis practices its menu. The hotel services the Roman Catholic Fleur de Lis Ball, where the girls are presented to the archbishop, and the Veiled Prophet Ball, a 1,200-guest event more than a century old. Marianne Rogers, catering sales manager for the hotel, says her team typically holds six menu tastings for each ball, and since many girls are in both balls, the same menu can't be repeated. To be prepared, the chef begins planning the menu for the following year as soon as the balls — which take place within a week of each other — end, with ball committee members sampling the menu and offering suggestions.

Annette Zeller, associate director of catering for the Beverly Hills, Calif.-based Beverly Hilton, says for the Las Madrinas Ball, which the Beverly Hilton has hosted since the hotel opened in 1955, “The menu has to be as elegant as the attire of the guests.” The three-course sit-down affair consists of assorted canapes, lobster bisque, beef tenderloin Chateaubriand with Merlot sauce, potatoes au gratin, winter vegetables, dolce de leche ice cream truffles and snowflake holiday cookies. She says the menu has changed little over the years, and the ball's organizers “tend to like classic choices, with perhaps a more updated presentation.”

For debutante ball menus at New York's Waldorf-Astoria, “We always try to differentiate the appetizers and the desserts, but for the main course, we most often do beef,” says senior social catering manager Tamara Schlueter-Bayo. The Waldorf also includes a fish or vegetarian option for the many balls it hosts, including the International Debutante Ball, the Debutante Cotillion and Christmas Ball, and the Junior League Thanksgiving Eve Ball, with some girls participating in all three events. While the food is elegant, because the proceeds from the balls go to charity, “You want to control your cost,” Schlueter-Bayo notes. So menus aren't as extravagant as they are for many weddings, for example. The meal for the balls usually consists of a warm appetizer, entree and dessert; the International Debutante Ball adds a salad course. In the past the Waldorf-Astoria has served such menus as vol-au-vents filled with mushrooms, beef filet with Cabernet sauce alongside Gorgonzola potatoes au gratin, and a chocolate raspberry dessert.

The Adam's Mark has experimented with both three-course and four-course meals, but Rogers prefers three. She explains that not long after dinner starts, all the girls want to do is “get to their friends and get out on the dance floor,” making it difficult to keep them seated through a four-course meal. In a first, the hotel offered a palate-cleansing champagne sorbet as an additional course after the salad last year, followed by the entree served at 11 p.m. and then dessert. Food items for the Fleur de Lis Ball included Japanese chile-scented brioche and shrimp crisps for appetizers, a salad of sweet-chile-marinated shrimp with seared ahi tuna on soba noodles and Asian greens, a sherry shiitake filet mignon with wasabi potatoes for the entree, and a dessert of ginger-spiced mango and white chocolate bombe with edible chocolate “chopsticks” and coconut rum sauce. The Veiled Prophet menu had items such as marinated salmon on baby greens with white balsamic orange vinaigrette, Asiago-encrusted filet with crimini mushrooms, and a milk chocolate timbale sprinkled with gold dust.

With the guests of honor all in white, debutante ball coordinators take many precautions to prevent spills. Tony Abadie, director of catering at Hilton New Orleans Riverside, echoes other catering directors by saying, “We always serve just water and Sprite — in case they spill anything on themselves, it won't be seen.” Menus also avoid messy dishes to prevent similar problems.

The tables can pose as big a risk to gowns as the food. As Rogers explains, “All the linen has to be white so dye doesn't come off on the dresses.” In addition, the Adam's Mark puts a seamstress as well as a laundry person armed with club soda on duty to attend to spills on gowns immediately. Schlueter-Bayo suggests another method to prevent spills: forbidding people to hold drinks as they greet the debutantes in the receiving line. She says, “You would hate for one of the adults to go through and hug someone while holding a glass of red wine.”

Many balls have their own eccentricities. The Thanksgiving Eve Ball, for example, always has a midnight supper of chicken potpie. And the presentation for the International Debutante Ball, also at the Waldorf-Astoria, follows a specific protocol, with girls escorted by two boys: one in white-tie attire and the other a military escort. During the presentation, girls perform curtsies from their particular region. The presentation ends with the girls from Texas curtseying “all the way down to the floor — their noses touch their skirts,” Schlueter-Bayo says, in what is called “The Texas Dip.”

Traditions of the Veiled Prophet Ball require the Adam's Mark to put dill pickles in one of the rooms, Rogers says. The “Veiled Prophet” is also a mystery — the person wears a veil over his face throughout the ball, and his identity is a secret, even to those attending.

With many debutante balls running well into the night, breakfast sometimes ends the event. Both Adam's Mark and the Hilton New Orleans Riverside offer breakfast buffets. At the Hilton, debutantes and their families are invited to a breakfast typically served from 10:30 p.m. to 11:30 p.m. depending on when the presentation ends. Breakfast includes scrambled eggs, bacon strips, grilled link sausages, hash-brown potatoes and, according to Abadie, “You always got to have grits because it's New Orleans.”