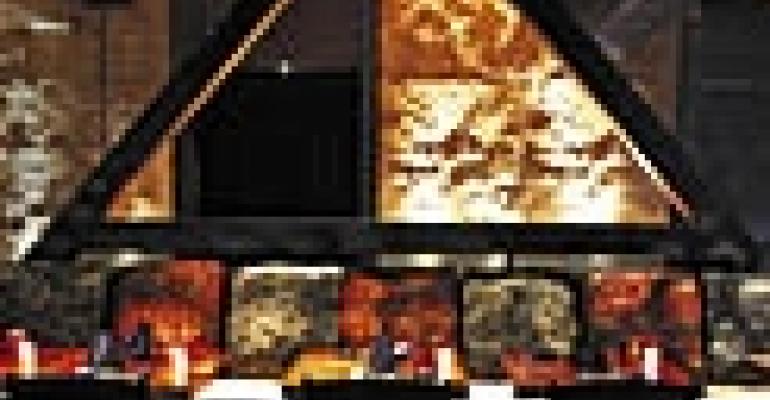 WITH ITS NEWLY launched catering operation, Los Angeles-based Innovative Dining Group is well positioned as food & beverage provider for some of the city's swankest entertainment industry events. After all, says director of catering and special events Laura Holycross, Hollywood heavies are frequent diners at IDG's upscale eating establishments, which include Sushi Roku and Balboa. Indeed, it was familiarity with the Japanese-inspired cuisine and cool look of IDG's Katana restaurant that sold Warner Music on the Sunset Strip site for its official post-Grammy Awards party in February. All Holycross and crew had to do was get a star-studded pack of 625 guests greeted, entertained and fed before everyone hightailed it to the next bash of the night.

Holycross counts “food flow” as the event's biggest hurdle. “We had so many people to serve in that space,” she says, listing Katana's large open patio, a private dining room converted into a sake lounge for the night, and the restaurant's main dining room.

To make sure guests did not have to wait for food or drink, Holycross crafted a serving plan that involved 26 food servers, 11 bussers, eight bartenders and a kitchen crew of 14. A combination of buffets, tray-passed hors d'oeuvre and served tapas plates helped ensure that guests got food whether they were lounging or roaming through the low-lit space.

The space itself, set inside West Hollywood's landmark Piazza del Sol building in a prime spot overlooking the bustling Strip, offered somewhat less of a challenge, Holycross says. With Warner's directive to provide an “elegant, but very trendy, hip, cutting-edge L.A. lounge feel,” she explains, the restaurant's own aesthetic did most of the work. “It's all very natural — lots of iron and stone, with candles set into the walls.” All she added were a few embellishments, including additional candles from Phoenix-based Joel D. Baker Designs and daybeds, simple wood tables and Japanese lanterns from Montebello, Calif.-based Abbey Event Services.

Guest arrivals, which started at about 9 p.m., set the no-wait tone for the night, according to Holycross. “We really overstaffed the valet, which was a suggestion of the valet company,” she says. With 65 attendants on hand to meet limos and get cars parked, plus a full lane of Sunset Boulevard blocked off to accommodate the flow, “it was an easy in and out,” she adds.

As party-goers made their way into the restaurant, climbing a set of stairs to the 200-capacity patio, they were met immediately with a drink. Two portable bars positioned on the patio helped maintain a steady flow of cocktails and celebratory “sparkling sake” — “the biggest rage in Japan right now,” Holycross says.

Meanwhile, Katana's Asian-influenced fare, including charcoal-grilled robatayaki, circulated throughout the space and made for the evening's highlight, Holycross says. Sharing the menu with the restaurant's popular chicken, seafood and vegetable skewers were five different kinds of sushi plus festive alternatives such as lobster cigars and lamb lollipops.

Though music superstars including Madonna, Jewel and members of Matchbox 20 were on hand to enjoy the Katana experience, they stuck to the reveler's role. Entertainment came instead from Grammy-nominated Warner Music DJs who, with the help of a portable generator brought in for the night, spun lounge sounds from the patio to fuel the party's smooth groove.

While Holycross says that not much of what she does has changed since she gave up her own company to take her IDG position, the Warner Music party shows how having the force of fame behind you can help. “As an entrepreneur doing event design, I was selling,” she explains. “Now I'm selling catering instead of event design.” With IDG's restaurants so well-known, she adds, “It really opens doors when I go into the film studios, or anywhere.”

There's also the advantage of having ample facilities and culinary staff keen to make their menus work off-site. Holycross says weekly meetings with Katana executive chef Vernon Cardenas and executive sushi chef Hiroshi Shima help the catering operation make decisions about what will work best off-premise. While tempuras have been deemed difficult to do outside of the restaurant, for instance, robatayaki has proven a big hit. Holycross cites Katana's two portable grills — capable of preparing the skewers for 2,500 diners — plus the ingredients' low-fat, low-carb appeal as selling points.

And while Warner did opt to come on site for its soiree, Holycross says buy-out parties are not her department's main focus. “I really want to establish us as off-premise catering,” she notes, but off-premise with an in-house soul. “Our sushi, for instance, is prepared on-site. It is never pre-prepped. It has to be fresh — exactly the same as if we were serving at the restaurant.”