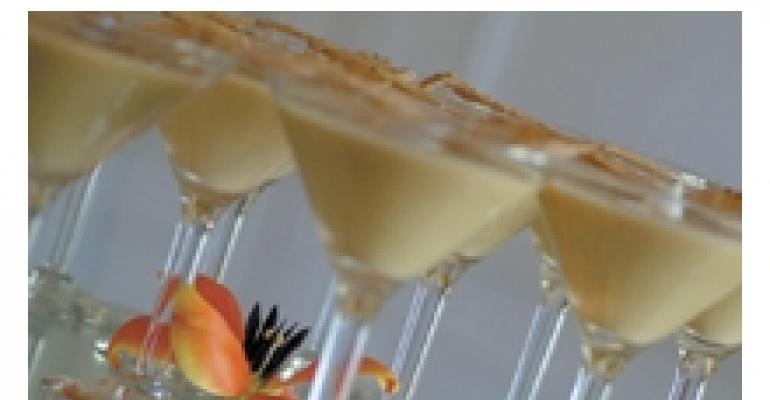 A MATTER OF TASTE

THE flowers may be perfect, the wine divine, but in-demand caterers across the country concur: The recipe for a successful party is based on fabulous food. In this month's cover story, award-winning off-premise caterers share their insights into keeping culinary concepts fresh and food quality flawless.

Fresh, recognizable food — that's what clients seek when they seek out Houston-based Melange Catering & Special Events, according to owner Linda West. “You will never have to guess what you are eating,” explains the winner of the 2005 ICA CATIE award for Best Menu Design.

Examples of Melange's simple, sophisticated dishes include beef tenderloin — “always a popular choice in Houston,” West says — which her chef prepares crusted in a cocoa-espresso rub, then char-grills and serves rare. And while it's sometimes difficult to get her clientele out of a meat-and-potatoes mind-set, West notes that she does her most effective persuading with savory sides such as a Jerusalem artichoke mash and a potato pavé with goat cheese.

Coming up with new creations that fit the “recognizable food” bill while still living up to Melange clients' high-end standards is one of West's highest priorities. That's one of the reasons she makes continuing education a must for her staff. “We like for all members of our team to be stimulated by some form of continuing education, and we usually offer them the opportunity to take a class or attend a conference at least once a year,” she says. Such emphasis on culinary learning, coupled with West's practice of entertaining guests at her home as a way to test proposed new Melange menu items, allows the catering operation to update its seasonal offerings constantly.

At the same time, paying attention to each event's “service environment” prevents Melange from making major menu mistakes. For instance, West says, “You don't want to serve a molded ice-cream dessert in Texas in July in a tent. Even if you have a freezer on site, by the time you plate it and get it served to the guests, it is mush.”

The caterer's tiny kitchen — a feature that some operations might deem a drawback — actually is a boon to Continental's clientele, according to event designer Nicholas Souza. “We don't even have room to store things,” he says. What's more, “We only have one tiny freezer here. It has ice cream in it.”

Despite its diminutive digs, Continental manages to turn out food that features big, bold flavors. Among client favorites are seared tenderloin served with sweet red onion jam and watercress sauce, for a mouthful that is “a little bit of sweet, a little bit of bitter,” Souza says. A phyllo tart hors d'oeuvre combines rich Cambozola cheese with sweet tomato chutney and a topping of spiced pistachios. Then there's a tangy, salad-like shrimp cocktail served in a champagne coupe with a sugared rim, which is versatile enough to work for Mexican- or tropical-themed parties, two popular event themes with the caterer's clients, Souza adds.

To offer diverse dining options, Continental makes sure its staff stays abreast of new culinary developments by staying involved with professional organizations in the catering and event industries. “At least one of us goes to the NACE and ISES conventions each year,” Souza says. On top of that, Continental staffers attend “all monthly NACE and ISES meetings,” he adds. “It's great to see our peers and what they're producing.”

The 2005 CATIE winner for Chef of the Year and culinary head of the Philadelphia-based Feastivities, credits this wide range of food-idea resources for helping him come up with major menu innovations. Most recently, these have included dishes on the order of stacked sea bass — a pan-seared fillet stacked with layers of gaufrettes and served with asparagus, diced tomatoes and a saffron crème fraîche.

Most noteworthy among Feastivities' novel concepts is “Span-Asian,” a CATIE winner for Most Innovative Food Trend. Snow cites Span-Asian bites such as a wonton soup featuring saffron consomme and chorizo- and shiitake-stuffed wontons, and an eggplant and roasted pepper flan duo served in a yin-yang presentation on a flatbread spoon.

Think a fusion of two such far-flung food traditions is an unlikely choice for an all-American caterer? Not at all, Snow contends. “There's so much mainstream America hasn't been exposed to,” he says. “I think it's our duty as caterers and chefs to get these items, bring them back and show them to people.” But food can't just be different for the sake of being different, he adds. “It has to be good,” he stresses. “That's where fusion comes in. It's taking obscure ethnic ingredients, and changing them to fit the palates of our clientele.”

Making menu development the responsibility of each member of the culinary team is one of the ways Toronto-based Eatertainment Special Events & Catering stays at the top of its game. So says Sebastien Centner, director of the catering operation that just brought home two Canadian Event Industry awards.

Eatertainment hosts quarterly meetings to revamp its menus and weekly meetings to keep staff abreast of additions and changes. In addition, “Each member on our culinary team is provided with a list of items — hot canapes, cold canapes, poultry mains, etc. — and then does independent research on new and exciting items in each area,” Centner says. Sales staff input is also incorporated to “ensure we have direct input from front-of-the-line staff into the development of new menu items,” while client invitation evenings are used to test proposed menu items for the upcoming season.

With such keen attention to its culinary offerings, it's no wonder Eatertainment has come up with delectables including venison carpaccio with spiced pear salad and shaved parmesan, smoked salmon timbale with fresh crab and Tobiko caviar, and warm goat cheese souffle with micro-greens and red currant glaze.

Another dish received an inspired flourish in the wake of yet another Eatertainment menu-development endeavor: “Our executive chef spent one week in Italy last year learning about gelato and came back equipped to offer a more expansive range of options for our clients,” Centner notes. “One item which came out of that trip was the addition of a basil sorbet to our summer melon chilled soup.”

Examples include everything from a molasses-glazed tenderloin served with sweet potato compote and candied pecans to a mini BLT with applewood-smoked bacon and remoulade sauce.

For the team at Kathy G — a 2005 CATIE winner for Best Themed Buffet — sourcing ingredients is a local enterprise as well. Mezrano's son Jason Mezrano, executive chef, touts his company's well-established relationships with local suppliers and organic growers. “We participate in a summer Saturday market event here that draws many farmers, especially organic farmers,” he says.

The challenge, the younger Mezrano notes, is in “the logistics of keeping hot food hot and cold food cold for larger events.” For that reason, Kathy Mezrano says, her company has to look beyond local borders for help sometimes. “We don't have things like propane stoves, or a lot of electric warming units. We don't have a lot of steam pans or plate stack units. We just don't have rental companies around here that have that kind of equipment,” she says. When an event calls for such items, or for upscale accoutrements along the lines of specialty china and chiavaris, she'll seek out vendors in Atlanta and even as far north as Washington. At the same time, “We own as much as we can,” she says. “We try to be advanced in our market.”

For caterers, restaurants are not just places to dine, but sources of inspiration. Here are some of the eating establishments the pros prize most:

“Probably the best sushi I have tasted anywhere in the world, and with a pineapple sake to die for. It epitomizes Miami cool.”

“Great food, but always unique presentations. It's the first place I ever saw ‘steps’ — like a little tray with glass levels where a food item is ‘decomposed’ into parts on the different levels, or there are three different kinds of caviars. And it all tastes wonderful. The presentation alone is worth the price of admission.”

“A real down-home barbecue. There's a sign inside that says, ‘Place your order, sit down and be quiet. We'll call you when it's ready.’ They serve a sweet tea that's made from well water with sulfur in it. But it's authentic to the region, that style of cooking. I look forward to stopping there every year.”