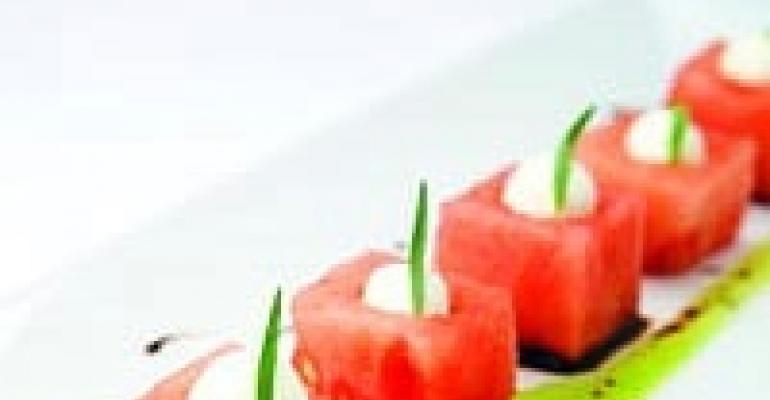 Want to know which catering trends are a flash in the pan and which continue to cook? Find out here.

2009 has been a doozy. With everything from pirates to the economy grabbing headlines, fancy food isn't on the public's radar as it once was. So where does that leave those trendy, sometimes-pricey food movements, such as molecular gastronomy and eco-friendly fare?

In fact, some trends will evolve; some will emerge; and others will flourish. Caterers weigh in on what to expect.

Eco-friendly food is here to stay, most chefs say. Not that there won't be challenges. Matt Bencivenga, executive chef of Wolfgang Puck Catering in Los Angeles, notes organic suppliers often can't provide product for larger parties with less than a month's notice, but “sticking with things that are cage-free and humanely treated is a different story.” He adds, “They seem to have the supply of these things at a good level to handle high volume.”

Price points too are tricky, with “green” products often running higher than standard foodstuffs. Bencivenga notes a bag of regular red onions costs about $15, while a bag of organic ones can be more than $60. Similarly, regular chicken is $2.59 a pound, while eco-friendly Smart Chicken runs $12 a pound. In general, expect food from sustainable sources to cost 30 percent more, says Richard Mooney, president and CEO of Los Angeles-based Kensington Caterers.

Despite the potential for expense with eco-friendly menus, Cuisine Unlimited Catering & Special Events in Salt Lake City hasn't seen requests for green catering fall. “In fact, we have seen a substantial increase,” president Maxine Turner says. It's become a standard for many of the company's regular customers, including the Salt Lake City Visitors Bureau, the Sundance Institute and the University of Utah. Recently, Cuisine Unlimited had a hit with a locally sourced “100-mile” menu that included beef tenderloin from nearby Harris Ranch as well as an apple and cranberry tart made with Utah fruit.

Indeed, “eco-friendly” doesn't have to mean “more expensive.” Mooney notes that the local movement has encouraged the public to eat foods when they're in season, which means they will cost less. And Duvall Catering & Event Design in Charleston, S.C., takes that a step further. The company now grows its own herbs, garnishes and edible flowers. “This saves us at least a thousand dollars a year — plus they are fresher, hold up longer and taste better than buying from our produce supplier,” chef Charlie Giordana says.

Molecular gastronomy — where food meets science to flashy effect — is known for being all the things that are out of vogue these days: showy, expensive and high-maintenance. According to Randall Sabado, chef de cuisine of Chicago's Food for Thought, “The cost of the equipment and training required to produce molecular gastronomy puts it outside the budget of most catering clients.” On the other hand, while Keith A. Lord of Festivities Catering & Special Events in San Diego agrees that “the equipment and setup can be expensive,” he adds, “the raw ingredients and items such as liquid nitrogen and CO2 cartridges are not.” In fact, chefs are split on molecular gastronomy's fate, but most agree that we shouldn't expect it to disappear like freeze-dried tomato dust in the wind.

Instead, expect to see molecular gastronomy as an addition rather than the main focus of a dish. As Bencivenga puts it: “These are bells and whistles that should be sprinkled throughout a menu to keep it sexy and current.” In fact, Festivities has a whole arsenal of molecular gastronomy-inspired garnishes, including foams, faux caviars and dusts. The team even turns red bell peppers into “leathers” to add to a tomato salad and makes a fizzy version of honey — similar to the novelty candy Pop Rocks — to complement a yuzu and star anise soup served in a small, hollowed-out, watermelon square. Lord, for his part, says the molecular gastronomy movement is here to stay, just not in its current form. “We expect to be using it in our everyday application five years from now, but practically — not so much as a flashy idea,” he notes.

Comfort food is comforting for a reason. As Mooney explains, “Not only are comfort foods often simpler and less expensive than their more elegant counterparts — think starch and fried! — they offer us gratification on a whole other level.” Hearty fare that calls home to mind tends to be very recession-friendly, and 2009 will likely prove that rule.

Cheese will be at the forefront of this movement. Look especially for fancy mac 'n cheese dishes with blue cheese, wild mushrooms, pancetta or black truffles, Mooney says. Another comforting favorite is an upscale version of a grilled cheese sandwich; for example, Kensington Caterers makes a manchego cheese and Iberian ham panini with a shot of heirloom tomato gazpacho. Another star: “Baked ‘fried’ chicken on a bed of root vegetable ‘coleslaw’ served in an unusual bowl is a lovely and inexpensive twist to a classic,” Mooney offers.

In the up-and-coming department, look for the micro-meal. Mooney describes the concept as “a small plate that has the components of a larger dinner plate but is significantly scaled back in portion size.” Or, put another way: “larger than an hors d'oeuvre but smaller than a full course,” Opper says. Micro-meals typically come with a 2-ounce portion of protein rather than 8 ounces and often appear at grazing parties, either butler-passed or at stations. They are great for cocktail receptions, Opper notes, because guests aren't “stuck holding a plate or trying to find a place to sit down and eat.” For his part, Lord likes to alternate between rounds of cold and hot micro-meals to keep costs down.

Some caterers find these pint-sized portions are an excellent way to offer extravagance on a budget. Food for Thought once presented seven downsized courses to 400 people. Three courses — a salad, soup and entree — can also go micro and still be satisfying. Recently, Festivities served a Peruvian ceviche, a saffron mussel soup with mussel beignets, and glazed short ribs with roasted Serrano chile-apple puree to raves.

With money tight, it's no surprise that simpler foods are back in style. “The trend is for chefs to edit and delete, treating the main ingredient with a high degree of respect,” says Patrick Cuccaro, general manager of Affairs to Remember Caterers in Atlanta.

It's hard to get much simpler than blanching vegetables. Chicago's Blue Plate does this for its popular first course or vegetarian entree gargouillou, which is an artful display of the season's bounty, says creative manager Sarah Finlayson. Each vegetable is blanched separately in its own water to preserve its flavor and is not “covered or hidden in sauces,” she notes. An arrangement might include fava beans, asparagus and Thumbelina carrots, for example. For additional flavor, chefs can blanch vegetables in different stocks or use varied salts, flavored oils or vegetable reductions.

And with simpler dishes now in vogue, expect more complicated fare to dip in popularity. Less likely to appear on the menu, according to Cuccaro, is an “Alaskan halibut with an herbed panko crust and shallot mashed potatoes topped with French fried onion slivers sprinkled with fennel pollen.” It's too fussy to fly in this economic climate. Mooney concurs: “Mercifully, gone is the trend towards needing 28 ingredients to make up one dish, which seemed de rigeur 10 or 15 years ago.”

Catering As Green As it Gets

High vs. Low-Cost Menus from Caterers