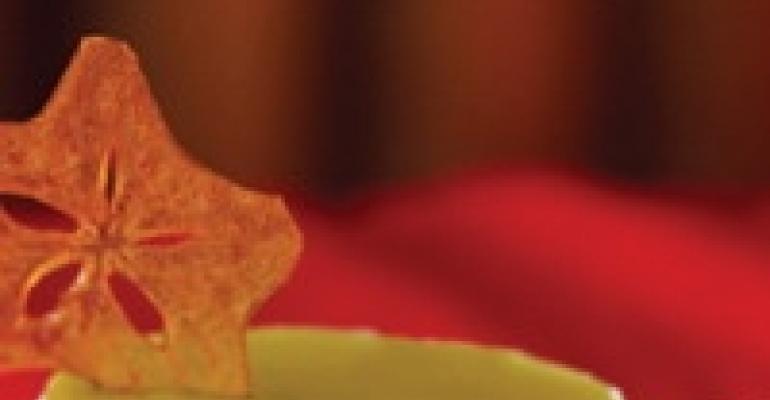 “Trend” can be a dirty word, often amounting to little more than a flash in the pan. Instead, event chefs prefer their pans to sizzle with something that has staying power. Here, catering experts embrace food trends worth trying.

THE TREND: Cost-effective Southeast Asian ingredients, such as the sweet pandan leaf

THE SCOOP: When Lee traveled to Singapore, she found locals using pandan leaves like Westerners use vanilla flavoring. She says the exotic flavoring is equally delicious in traditional Western dishes.

THE SCOOP: Executive chef Gypsy Gifford does a downsized version of the always-popular surf 'n turf, here in hors d'oeuvre form with a designer fish to boot. The sustainably farmed Hawaiian yellowtail Kona Kampachi is the latest wunderkind of the fish world. It contains no detectable mercury — so pregnant woman and children can have at it — and it's rich in omega-three fatty acids.

THE TREND: Piping hollowed-out fruits and vegetables with fillings

THE SCOOP: Pairing two dessert favorites — strawberries and creme brulee — came out of necessity for pastry chef Chon Reynozo. He had a strawberry surplus and needed a new dessert for an open house that night, notes CEO and founder Carlyn Berghoff. Because Reynozo had used strawberries in creme brulee, he figured creme brulee in strawberries would work just as well. The result? “The perfect bite-size sweet finish,” Berghoff says. And the technique can start a meal just as well as finish it. “We also have a brilliant cherry tomato piped with a special recipe hummus that is a savory hit,” Berghoff adds.

THE TREND: Unusual proteins, such as quail and rabbit

THE SCOOP: “Quail is a great alterative to classic chicken, and rabbit is the most easily digested protein for the human body,” former executive sous chef Cara Chigazola says. As the public becomes more health-aware, they will naturally turn to healthier proteins, she maintains. Also on the meat-eating foodie forefront, according to Chigazola? House-made lomo, a dry-cured loin of pork originating in Spain, which fits right into the slow food movement. Cetrella tosses its lomo in a salad with shaved manchego cheese and a sherry vinaigrette.

THE DISH: Faux “begula” caviar — Israeli couscous dyed with squid ink to resemble beluga caviar — served in a tin with lobster and a poached egg beneath it.

THE SCOOP: These fake fish eggs debuted at a Grammy party for the February reopening of Citrus at Social to crowd acclaim. And when a printer mistyped “beluga” as “begula,” the name stuck, says Ani Avanessian, senior special events sales manager. “The name of the dish tricks your mind to expect an entirely different taste,” Avanessian notes. Richard pulls a similar taste and texture switcheroo with his cuttlefish carbonara, which contains strips of cuttlefish resembling pasta.