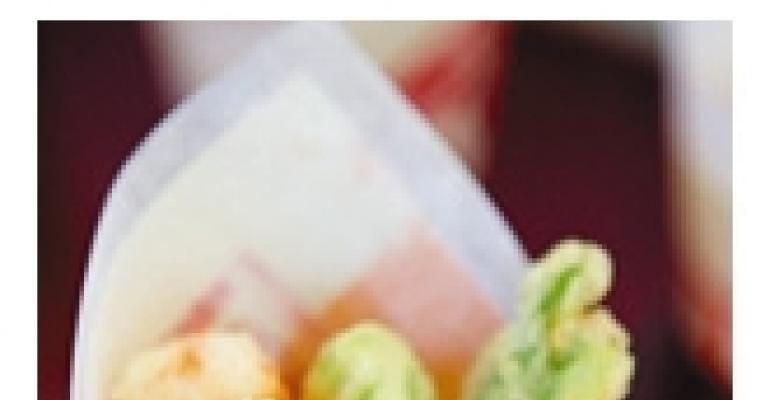 HORS D'OEUVRE offer all the flavor and none of the commitment of sit-down meals. From trays to stations, mini comfort foods to innovative appetizers, hors d'oeuvre today give event-goers a taste of everything.

Head chef and chief operating officer of Green Olive Catering in Woburn, Mass., Suzanne McNitt, says her miniature Brie cup is popular. She fills phyllo cups with Brie and a cream cheese blend, then tops them with cranberry chutney.

At Fork & Spoon Productions in San Francisco, Jonathon Beil, co-proprietor with wife Jennifer Spiegel, says their “frites” are his favorite; he describes their take on frites as a “vegetable or a little protein, like calamari, that we fry in a tempura batter.” The frites are served in hand-rolled paper cones placed in colorful plastic Lucite trays.

President and chef proprietor Henry Dinardo of Alexandria, Va.-based Windows Catering Co. says he eats “way too many” of his company's Gorgonzola potato cigars. He blends pureed Yukon gold potatoes with Stilton blue cheese, chives and roasted garlic, wraps them in phyllo and fries them quickly in peanut oil. According to Dinardo, event attendees “think it's a spring roll, but they're surprised by that burst of flavor from the potatoes and the Gorgonzola.”

Executive chef Paul Lorrain of Orlando, Fla.-based Puff 'n Stuff Catering has been working with an unusual take on the panini. He pre-preps the item by grilling large scallops and then filets them in half to make the “bread.” When the “sandwiches” are ready to be assembled, the scallops are sautéed in drawn butter and then filled with a finely diced northern Maine lobster salad.

President and owner Warren Dietel says that people relate to comfort food, so Puff 'n Stuff has its tiny take on a family classic: mini mac 'n cheese made with orzo and pancetta. “We take Asiago and make a tuile cup in little mini muffin tins, so it's actually the size of a mini muffin,” Dietel says. Lorrain adds that it's “a little butler-passed macaroni and cheese in a bowl, and you can eat the whole thing.”

Green Olive is promoting miniature shepherd's pie and meatloaf bites, which are the size of meatballs but in the shape of meatloaf. McNitt notes serving meatloaf as an hors d'oeuvre is a good compromise because people “love meatloaf, but they don't want to serve meatloaf at their company dinner party.”

With the popularity of TV's Food Network, guests are more interested in food preparation. McNitt likes to place little signs on passed trays describing the origin of the hors d'oeuvre. For example, a sign for beef empanadas would indicate, according to McNitt, “These come from Argentina, and the main ingredients are cumin and dried cherries.” She says the signs are especially helpful “when you're doing rehearsal dinners and you have big families who are meeting each other for the first time, and they don't really know what to say — they can talk about the food.”

Dietel likes menu cards at his stations so people with “special dietary restrictions — vegetarians, vegans, gluten-free, lactose-intolerant, nut allergies — know exactly what they're eating.” For passed hors d'oeuvre, instead of written material, Lorrain says, “Before {the servers} leave the kitchen with any food item, they know as well as the chef what they have on that tray, and they can describe it to the client.”

Caterers have different philosophies and techniques for presentation and service. Dinardo describes his approach to figuring out the amount and type of hors d'oeuvre to serve at an event: “We typically do anywhere from 10 to 14 pieces per person, which is an hour-and-a-half cocktail reception with hors d'oeuvre. Now {in winter} we tend to do 65 to 70 percent hot and 30 percent cold. And in the spring and the summer, it will switch, and we'll do 70 percent cold and room temperature and 30 percent hot.”

However, Lorrain prefers a 50/50 split between hot and cold because his food staff is divided so some work on hot food and others work on cold. He says, “Not only does it help the client diversify their meal, but it also helps the kitchen — if I did all hot food, the guys on the hot side {of the kitchen} would be complaining.”

Another menu concern is diversifying the primary ingredients of the various appetizers. McNitt says, “We try to do — for passed hors d'oeuvre — two vegetarian, one seafood, one beef and one chicken. For the stationary hors d'oeuvre, we try to encourage people to pick two to three with definitely one vegetarian.”

As for presentation, Dinardo is a fan of serving soups in test tubes. For example, he'll serve three different gazpachos that are yellow, red and green or a yellow tomato soup, a purple heirloom one, then a red one.

Beil prefers serving soups in espresso cups because he likes having handles that don't conduct heat. He also recommends a little viscosity for dipping sauces so they stick to the food. “You don't want a pot sticker that somebody dips into soy sauce and then they have a big soy stain on their shirt.”