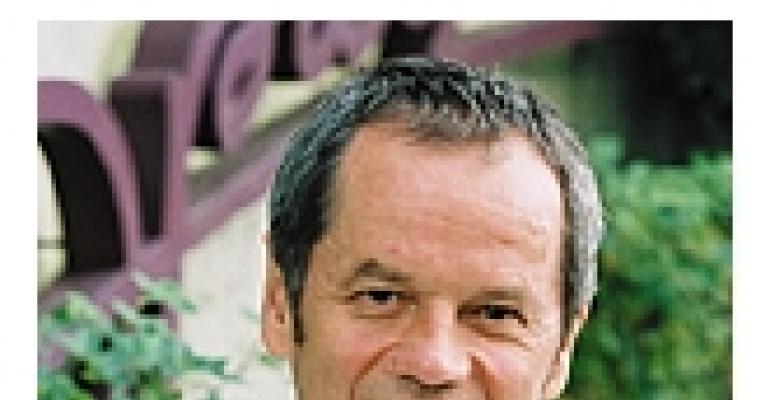 PARTIES ARE HIS PASSION

“I love to make people happy,” says Wolfgang Puck. And with the launch of Wolfgang Puck Catering seven years ago, the star chef, entrepreneur and arbiter of culinary taste has been able to spread that love a whole lot further.

Currently serving a virtual empire of event markets, including Los Angeles, Las Vegas, Chicago, and, newly added, Indianapolis and Minneapolis, Wolfgang Puck Catering evolved out of Puck's natural affinity for hospitality and appreciation of his clients. For nearly 15 years, he says, his flagship Spago restaurant in Beverly Hills, Calif., would take on off-site parties for “good customers” such as Madonna and tycoon Marvin Davis. Now, Wolfgang Puck Catering, founded by Puck and partner Carl Schuster (see page 33), allows non-celebrity clients to get the same famed menu items and level of service at their own fêtes and functions.

Wolfgang Puck Catering has become the in-house food and beverage provider for such esteemed sites as Chicago's Field Museum, L.A.'s Hollywood & Highland venue (home to Academy Awards ceremonies site the Kodak Theatre) and, most recently, Minneapolis' Walker Art Center. The company's business model is based on exclusive vendor/venue relationships first and off-site catering second, unlike many other independent catering operations.

But what really sets Wolfgang Puck Catering apart, according to the man himself, are the company's cooking chops. “What we have that a lot of other caterers don't is a lot of talented chefs,” he says. “I'm not saying that nobody else has talented people, but nobody has as many as we have.” The reason for such a wealth of talent is that all Wolfgang Puck Catering chefs get their start in Puck restaurants, and are experts in Puck's unfussy food style and signature dishes. These include perennial party menu favorites such as smoked salmon pizza, truffle pizza and tuna cones.

The only time his team won't do restaurant classics for events is when crowd size means food quality may be compromised. “We could do almost anything for a smaller party,” he says. “For example, with a party of 100 I can do a chocolate soufflé.” But for the Academy Awards Governors Ball — an event Puck has catered for 12 years running — “I'd say, ‘Forget about it.’”

As his catering business continues to grow, Puck says he's determined to bring diners “a mixture of things they are familiar with, and new things, too.” But new never means pretentious, he insists. Whether in restaurants or in catering, “I really believe food has to look good by itself. If you buy good, fresh green beans, you don't have to line them up in a row or anything like that. Just put them out on a nice-looking plate.”

“I've had many parties at my home in the last two weeks, because I was recovering from a hip replacement. Whether it was my fiancée cooking Ethiopian food, or a friend coming over to cook Mexican food, or someone going to Phillips [in downtown Los Angeles] and bringing barbecue, I love it.”

SLAVE TO THE FAVE

“I once did a party at Marvin's [Davis] house, and we had all the fancy appetizers there — stone crab, caviar, smoked salmon. [TV star] Jay Leno came up to me and said, ‘Where are the pizzas?’ Good thing my restaurant was right down the street. I ordered a few pizzas, and when they came, the next thing you know, everyone was gathered around them like children.”

“We've done economic summits, the Cannes Film Festival, things like that. But what I'd really like to do is the presidential inauguration. I'd do a really great ball with great chefs. I'd maybe invite other restaurants, have [chef/restaurateur] Nobu [Matsuhisa] make a first course or something. It would be something that is fun, and at the same time really unique.”