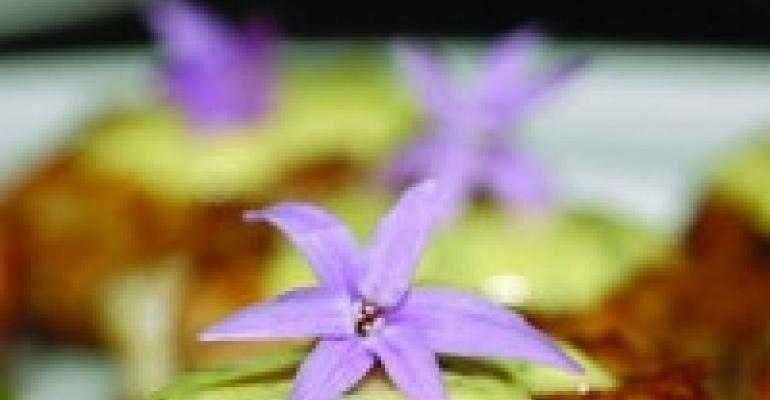 If anything is a feast for the eyes, it's food. These days, catered events grow more spectacular as chefs consider presentation elements in everything from the food to the plate to the wallpaper.

A MEANS TO A TREND

Food stylist, culinary consultant and author Susanne E. Wilder of Darwin, Australia-based Fast & Fresh Cuisine notes the deconstruction trend is still all the rage in Australia. She also sees a lot of “bright green basil oil and reduced caramelized balsamic vinegars, some with berry vinegars reduced and blended with the balsamic to soften the sharpness.” And foods such as mousse in long-stemmed tulip glasses continue to encourage the notion “the higher the stack, the greater the perceived value,” Wilder says. “But it doesn't fool me.”

While some trends don't pique chefs' interest, others do. Wilder especially likes “the dusting of vegetable powders and splashes of color — rainbow foods with thunderbolts of contrasting sauces.” She also favors presentations that use local ingredients and have “an element of surprise or whimsy,” which can be “a bright color, a surprising shape, an esoteric food item or a juxtaposition of texture.”

A PORTRAIT OF AN ARTIST AS A YOUNG CHEF

Drama is always in style. Laurent Branlard, executive pastry chef at the Walt Disney World Swan and Dolphin Resort in Lake Buena Vista, Fla., won the 2007 National Pastry Championship, which had a country music theme, with his intricate pulled sugar and chocolate ode to country superstar Tim McGraw. The 13-hour competition required Branlard's team of three to create three showpieces as well as pastries, cakes and plated desserts. And this type of culinary artwork isn't just for competitions. Branlard notes that clients now often request showpieces of pulled sugar and chocolate, much like his award winner, for dessert buffets. “I usually create very modern and abstract shapes out of blown sugar with lots of colors, which make the sugar look like glass,” he notes. In fact, famed glass sculptor Dale Chihuly is a source of inspiration for Branlard's contemporary-looking blown-sugar flowers.

No doubt, large presentations catch the eye. For example, instead of a waist-high buffet, Sean Brasel of Touch Catering in Miami once grabbed guest attention with a 6-foot-high rotating “matrix” cube. The lit cubbyholes held an assortment of little plates, such as foie gras sausages in brioche with apricot mustard, yellowtail “ceviche-tinis,” cranberry smoked salmon filet served on buttermilk blinis with cranberry creme fraiche, and watermelon gazpacho shots.

Brasel even finds food presentation ideas in everyday elements that many would quickly toss in the trash. For example, foreign newspapers can provide a visual kick to food, Brasel says. He covers the news-papers in plastic sheets, laminates them and uses them as serving trays. These newspapers also make a unique tabletop when secured by plexiglass, he says. In another innovative turn, Brasel takes a piece of wallpaper, wraps it around a plexi tray and laminates it with epoxy. At one party, the trays matched the wallpaper in every room, and the clear glass plates set below the trays made the food look as if it were floating, Brasel notes.

In fact, the area around the food often can be a part of the presentation. For instance, Brasel touts Chinese umbrellas as a great way to gussy up a Chinese station. “The umbrellas can be hung slightly above the table giving it that ‘Mary Poppins’ feel while lowering the roof and making the station seem more intimate,” he says.

THANKS, BUT I'M ON A DIET

Beauty is in the eye of the beholder, but some presentations don't whet these chefs' appetites. “No chichi or froufrou stacks, please,” Wilder says. “Besides being passe, they are difficult for servers to ferry and for diners to break down and eat gracefully.” Wilder also doesn't care for “tired-looking food, no garnishes and a boring presentation of innocuous and pedestrian dishes.” She adds, “I not only look away but walk away.” A mini-luau on a table with pork suspended over sand didn't leave Brasel hungry for more. “For an art piece, it was impressive, but when it came to the food, it was still suspended over sand and very unappetizing to me.” He adds, “I remember thinking to myself, ‘That's one I won't try.’”

CATERED FOOD: READY FOR ITS CLOSE-UP

Professional photographer Suzanne Carreiro — who is also a food, prop and set stylist — specializes in food photos for the Web at her Napa Valley, Calif.-based Cheap Shots. Here she provides a food photography guide: