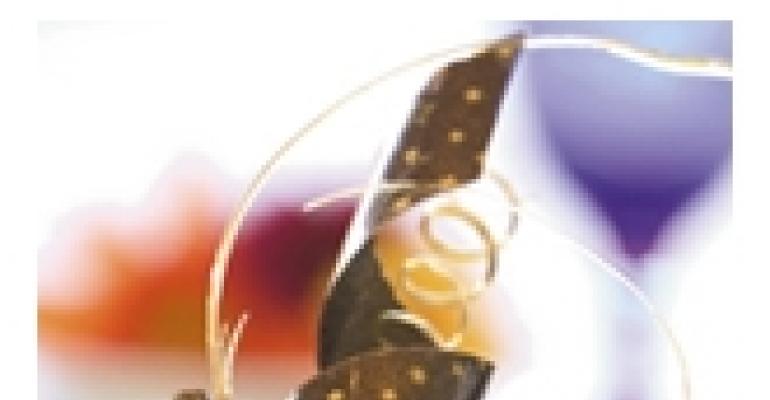 THE PRICING IS RIGHT

CALORIES aren't the only numbers counted when developing menus — sometimes fancy meals flash dollar signs as well. But extravagance doesn't have to come at a high price. Read on to discover how four hotel caterers give event planners outstanding meals for the money.

Chicken may be the obvious choice for cost-conscious menus, but that doesn't mean the meal has to be a bore. “Chicken has such a bad reputation for banquet events,” says Shelia Henderson, director of catering at the Benson Hotel in Portland, Ore. “However, that is really due to poor preparation and presentation.” She suggests a hearty menu of stuffed chicken breast paired with garlic mashed potatoes and fresh seasonal vegetables to keep poultry from seeming paltry.

Executive chef Dennis Shakan of Baltimore's Tremonts also encourages what he calls “those other meats: the white meats — the chicken, the pork, the turkey.” “Too many people eat turkey one time a year,” he claims. A cost-conscious dish he describes as “absolutely delicious” is wild rice flour-dusted turkey medallions with caramelized corn and sherry cream sauce.

Todd Jeannotte — director of catering and conference services at Four Seasons Hotel Vancouver in British Columbia — has his own white meat suggestions. “Cornish game hen is something that reads nice but isn't substantially more expensive than chicken,” he notes. A menu he likes includes lobster bisque, truffle- and honey-glazed Cornish game hen and a Valrhona chocolate mousse. “It's not necessarily all that expensive relative to some of the other choices,” he says, such as lobster medallions for an appetizer, filet of beef and a warm dessert.

Cost-conscious planners can be in the market for fish as well. Shakan and Jeannotte both tout salmon. “Everybody loves salmon,” Shakan says. But for planners who find salmon too rich, Henderson suggests trout as a substitute. Cod or sole can go in halibut's stead as well, she notes.

BANG FOR YOUR BUCK

Clients with champagne dreams but beer budgets can be satisfied as well. If clients demand pricey prawns, Jeannotte simply stretches the item with a prawn pasta. And those who long for lobster can get their wish — in the form of lobster bisque. Shakan has similar suggestions for making the most of key elements. When working with clients, he might ask, “Does the chicken have to be a half breast? Could it be a chicken stew? Instead of salmon filets, could it be a cioppino?”

Another trick: medallions. Shakan worked with a couple who wanted filet mignon; what he offered instead was a more affordable trio plate: a 2½-ounce filet medallion, a 3-ounce chicken medallion and a 3½-ounce salmon medallion. With beef medallions, “I'm getting to use the whole tenderloin instead of just the center cut,” he says. “I'm saving a lot of money, and I can pass that on to you.”

David Winter, director of event planning and operations at the Renaissance Worthington Hotel in Fort Worth, Texas, also cites clients' beef with anything other than prime cuts of beef. “They get spoiled after a while with tenderloin, especially in Fort Worth, Texas,” he claims. Particularly problematic has been the rise of tenderloin prices by 50 percent to 60 percent in the last couple of years, which forced the Renaissance Worthington to switch to market pricing for beef on banquet menus.

Yet, a party's theme can help please beef-loving guests when the budget is tight. For one such event, the Renaissance Worthington's chef created a Brazilian menu that included a salad of mixed greens, diced mango, pomegranate seeds, walnuts and manchega cheese with an avocado and lime dressing; mojo vaca frita, or shredded fried beef, as the entree alongside black beans, white rice with slivered garlic and fried plantains; and for dessert, a tres leche cake soaked in three types of milk, which included a fresh cream sauce and cajeta — a caramel sauce made from goat's milk.

Most hotel caterers agree — if you want to up the ante on your budget in only one place, put your money on dessert. Clients will remember the desserts, Winter says, even when they can't remember anything else on the menu. One example he gives of a slightly higher-end dessert worth a few extra bucks is a ganache-glazed flourless chocolate cake timbale.

There are high-end desserts at low-end prices as well. Shakan makes a basil flan with a mango gelato accompanied by a fresh lychee nut and three raspberries. “If you look at this dessert, you would say, ‘I think that's expensive,’” he says. “But in reality it's cream, eggs and sugar.”

He notes another savvy cost-saving tip for wedding planners: sheet cakes. “People are getting a little cake to do the cake cutting and have a sheet cake {in the back} to slice up,” he explains. He claims this can mean the difference between spending thousands on wedding cake or hundreds.

Hotel caterers happily give tips to help planners stretch a budget. Shakan suggests planning the event during the off-season to avoid spending big money. “You go to a hotel in January, they'll fight over you,” he says. “They'll start discounting everything, and you can pit three places against each other.” This can result in discounts of up to 30 percent, he notes.

Winter claims short-term booking of only a week in advance can make event costs skyrocket. Instead, he recommends locking down a menu at least two to three weeks in advance because “it gives an opportunity for volume purchasing, to look around and get a better deal on something.”

Jeannotte has suggestions for cutting costs as well. Holding events on a “school night” or hosting a Sunday brunch rather than a Saturday dinner are good ways to cut down on alcohol consumption — and careening tabs — he notes. Holidays, too, can work to a planner's advantage. “Closer to the holidays I'm likely to be a bit more flexible on the price point,” he explains. “Not on holidays, though, because I have to pay extra for labor.”

For the most part, hotel caterers say beware of buffets. “Ultimately buffets are a horrible choice,” Jeannotte says. “The reason is more selection, and we don't control portion cost.” Henderson cites one way to ease this expense: have banquet staff serve food. Still, “You should add up to 20 percent to go from plated to buffet,” Jeannotte says.

Yet Shakan claims a buffet can actually be less expensive when it comes to dessert, especially because many guests forgo sweets altogether, which can be costly and wasteful for a plated affair. “If I switch to a dessert table at the end and there's 100 people, I'm going to start out by putting about 70 pieces on it,” he says. “That may do it.”

According to hotel caterers, you can't always get what you want. Here they give readers the lowdown on how to spot high-priced food. Sheila Henderson: “Foods that are out of season — fruits, vegetables — seafood, shellfish and foods that need to be special ordered or are not normally used in the kitchen.”

Todd Jeannotte: “Canapes or hors d'oeuvre due to the labor involved in preparing them. Particularly cold hors d'oeuvre tend to be a little more elaborate than hot ones.”

David Winter: “One of the things that we really advise against is for planners to ask about any of the overfished species.”