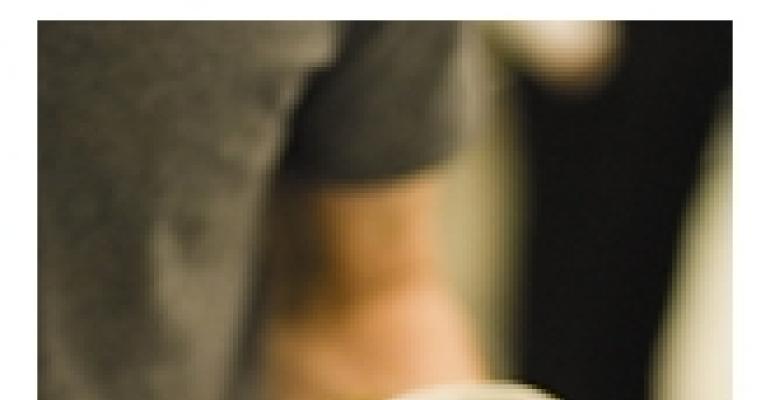 ORGANIC food has left behind its hippie associations and moved into upscale supermarkets and acclaimed restaurants. And although its progress at catered events has been slow, interest in “green” catering is growing. For example, celebrity chef Wolfgang Puck's organic menu for the 79th Academy Awards Governors Ball in February gave the cause some helpful attention. As organic food goes Hollywood, the public will follow suit. And the green-centric caterers profiled below will be ready.

Banish the image of tepid tofu topped with soggy sprouts; organic catered events have all the spice and flavor of other catered events. Chef and owner Timothy Bartling of New York-based Organically Green Catering worked on an event where everything except the olive oil and the sea salt was organic or sustainably harvested within 20 miles of the party. This resulted in such delicacies as gazpacho of heirloom tomatoes with lobster and basil as well as corn, squash and squash blossom risotto. “When I informed the guests at the party that everything was local and organic, they really flipped,” he says. “Some people had no idea that great food was being grown under their noses.”

Some clients are committed to the cause from the start of the event-planning process. Henry Stout, owner of Indian Hills, N.Y.-based Full Moon Catering handled one wedding reception where the couple owned a community farm, at which “people pay a flat rate at the beginning of the season, and {the farm} delivers whatever is harvested divided among those who sponsor the farm,” Stout explains. When he discovered the couple's background, he encouraged the use of their produce in the menu. This added a flavorful organic punch to such recipes as phyllo strudel purses — filled with portobello mushrooms, buttered leeks and blue cheese — and tomatoes, fresh mozzarella and basil chiffonade with vinaigrette.

Antoinette Benjamin, chef and owner of Food for All Seasons in Ann Arbor, Mich., describes a wedding rehearsal menu for a professor of natural resources. Among the offerings were smoked Michigan lake trout with Michigan apples on toasted won tons and local Ernst Farm grilled chicken breast with house-made nasturtium butter.

Organic food is not only for small soirees of the weeds-and-seeds set; major events are going green too. Eric Fenster and Ari Derfel, principals of Back to Earth Organic Catering in Berkeley, Calif., tell of an event they produced last year for the Breast Cancer Fund that included foods from local farmers; free-range, organic-fed chicken; wild-caught, ecologically harvested fish; and organic spices and oils. Offerings included almond-crusted chicken skewerettes with a strawberry ginger glaze and smoked wild salmon phyllo pursettes with dill caper cream.

While food can be sustainable, money — for most — is not. And green catered events don't come cheap. “Yes, things cost more,” Bartling admits. But he's philosophical on the issue: “If you calculate the long-term costs to the environment, health of the farm workers, etc., those costs someday will more than catch up with us.”

Fenster and Derfel claim organic food isn't the sole contributor to pricey events, noting food makes up only 20 percent to 30 percent of a catered event's cost. “If we run an event with a high price tag, it is not just because we use organic food,” they note.

And organics aren't always outrageously priced. The difference between Full Moon's premium organic menu and the company's regular menu isn't significant, according to Stout, citing a $10 surcharge per head. Lower priced organic fare is feasible as well. For example, “If there's an abundance of a certain product in a given season, then that could drive prices down,” Stout says. Benjamin has her own technique to ensure organic produce at a reasonable price: She grows fresh herbs, heirloom tomatoes, peppers, lettuces and eggplants herself.

In addition, Casteel claims a sense of restraint prevails at green events, which lowers the cost. “A few more cents on food cost can actually balance out with a downscaled portion size/preparation, therefore not really adding that much cost to an event menu,” he notes.

Still, with eco-friendly catering comes a set of complicated issues. Fenster and Derfel point to government subsidies, global food politics and economic policies as contributors to green catering's high price tag, which can give pause even to clients committed to the cause. “Many clients come in wanting {environmentally friendly menus}, and then they find out that it is more expensive,” Benjamin says. “They have to make choices about what is more important to them.”

Adding to the confusion, organic products can also take some toll on the environment. “To be able to have fresh mango in the middle of winter — you have to bring it in from wherever it's being harvested at that time, which is very often not local,” Stout points out. The more environmentally sensitive route could be “a local farm that isn't fully certified organic, but they're growing with excellent tactics and producing wonderful food,” he says.

Even as green awareness grows, it's still a niche market, Stout notes. Clients requesting exclusively organic menus make up about 25 percent of his business.

And universities lean toward green. Both Casteel and Benjamin have noticed increased environmental awareness in their cities, which are home to major universities. For Benjamin, this has resulted in 60 percent of her clients requesting eco-friendly fare. She breaks it down by age: “In our community I would say that the 20-somethings definitely are talking about it, the 30-somethings want this for their weddings, and the 40-somethings — who are the ones who shop at Whole Foods — want this for their parties and family gatherings.”

Another good sign: getting organic produce is easier. Bartling participates in a community farm where “the farmer can grow a crop knowing that he or she will sell that crop at a fair price.” He adds, “I can request what kinds of things I would like grown, at what level of growth they should be picked, and when I need them to be delivered.”

Fenster and Derfel can see the trend in their own business: “Back to Earth has grown by more than 100 percent every year for the last three years, so we know that this is more of a growing wave than a fad.”

Like any hot movement, environmentally friendly catering has plenty of buzzwords. Here are the major ones:

LOCALLY GROWN: A movement that boosts the local economy by encouraging the purchase of local products.

FAIR TRADE: A movement that encourages fair payment on exports from developing countries.

COMMUNITY-SUPPORTED AGRICULTURE (CSA): Small-scale farms, often with an organic focus, where customers pay before the harvest and normally receive produce by delivery.

WASTE: Wash instead of toss; send electronic invitations; use compostable service ware such as utensils from potato starch, plates made from sugar cane waste and cups made from corn plastic; use china and glass produced from recycled materials; transport foods in reusable plastic containers instead of disposable plastic or aluminum containers; encourage the use of tap water instead of water in plastic bottles; use screw-cap wine instead of wine with corks to avoid depleting cork stock.

ENERGY AND FUEL: Use compact fluorescents, hold events during the day to limit energy use, organize carpools, use biodiesel buses, don't run hot water over leftover ice to melt it down the drain.

DECOR: Decorate with live plants, food, or organic or local flowers; give away centerpieces; if available in your region, use a flower shuttle to pick up plants after an event to take to a retirement home.