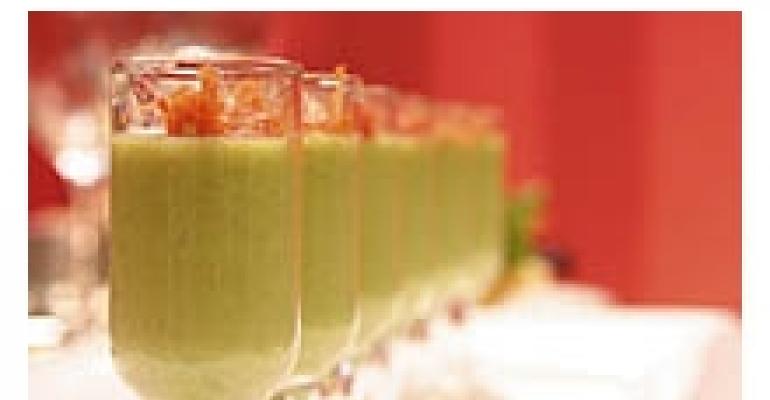 SPECIAL DIETS: WHAT'S NOT ON THE MENU

There's always someone in a crowd who doesn't like Brussels sprouts, but what about the guest with a serious allergy to the gluten in bread? Special-needs diners consider more than flavor preferences when eating yet still crave flavor-packed food. But event planners can take heart — caterers are up to the challenge of satisfying those following restrictive diets without restricting taste.

Pleasing a party of several thousand on a weekend retreat is always a major feat. But the Detroit Downtown Courtyard by Marriott had the added task of supplying an authentic Islamic menu to a sold-out hotel in February. The pressure was on with a Nation of Islam group in attendance to see NOI head Louis Farrakhan speak — especially when the group could easily walk down the street to Detroit's Greektown if they didn't like the food.

To please the crowd, chef Karen Havenstein opted for traditional spices, traditional meat dishes, plenty of vegetarian options and, naturally, no pork. The menu was a hit: Guests raved, and general manager Patrick Brennan was especially pleased by the 40 percent increase in business for the Thursday-through-Sunday event.

Sometimes the worlds of dietary restrictions collide. This was the case for one wedding served by Atlanta-based Affairs to Remember Caterers. The bride couldn't eat gluten; the groom didn't eat meat or eggs. On top of that, as senior catering consultant Dana Dabruzzi relates, the couple didn't want separate meals made for their dietary needs, so the gluten-free, lacto-vegetarian menu had to please all 100 guests. This resulted in a seasonal menu where even the hors d'oeuvre were custom designed.

Where some people see restrictions, others see opportunity. An Orthodox Jewish kosher request would require most venues to have a meal delivered, but the Hilton Cartagena in Colombia revamped the in-house kitchen to satisfy a growing Jewish market. In fact, general manager Vinod Agarwal claims the Hilton Cartagena is the only hotel in Colombia with a kosher kitchen, which is divided into three independent areas: one for washing food items, a second for preparing cold dishes and a third for hot items.

There are plenty of rules for keeping menus kosher, according to Agarwal. Some include: