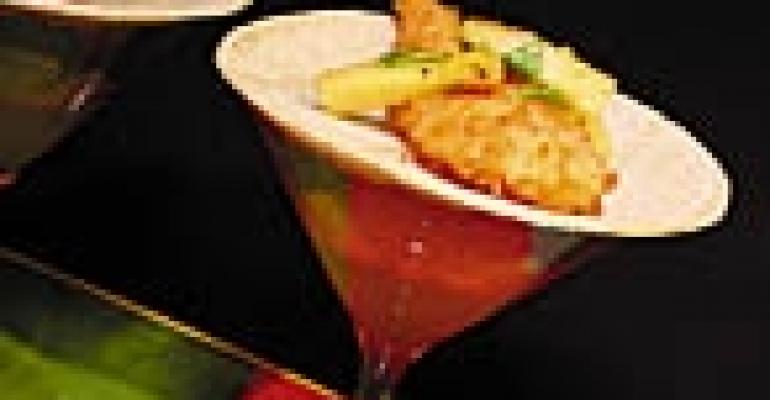 FOOD STATIONS: THEY'RE festive, they're fast, and they allow guests to sample a variety of menu items. Add in an action station or two, and they can even be part of an event's entertainment. In this month's column, three top caterers describe the stations they're creating at events from Honolulu to Miami.

While buffets and sit-down service are here to stay, nothing says “special event” like creative, bite-sized food served from stylish stations.

“The look of our stations is leaning toward very clean lines — several years ago we were doing a lot of fluff and fabrics, and now it's essentially box pleats and elevated tables,” notes John McPhee, marketing director at Miami-based A Joy Wallace Catering Production. For its tartare station, the company uses a custom-built, stainless steel panel — drilled with long rows of holes — that fits on top of a six-foot table. “It has a nice clean look to it, and you don't really need to add much decor — maybe some candles,” McPhee says. Station chefs scoop tuna or beef tartare into mini wonton “cornets,” which are then placed into the holes in the panel. “It looks like a variety of miniature ice cream cones, and they're bite-sized and really fun,” he explains.

Marcey Brownstein, owner of Marcey Brownstein Catering & Events, New York, uses props to make her stations stand out. “I have a prop stylist who I hire for any important event where we're doing stations,” she says. “I rent all kinds of glass pieces from the rental company: glass bricks, cubes, cylinders and small square bowls. We'll make pyramids and other interesting setups with them.” Her take on the seafood station — what she calls the Modern Raw Bar — makes use of varied styles of beverage glasses for foodservice. “We use martini glasses, sorbet cups, square shot glasses — whatever we can find that's a little bit nice, a little bit different.” These are used to serve a selection of seafood items, from crab and avocado salad to ceviches — including fish, bay scallop and rock shrimp — which Brownstein notes “work very well with Latin themes or modern, clean themes.” Seared wasabi- or pepper-crusted tuna squares surrounded by salmon roe and presented on small square plates add to the contemporary look.

Lately, stations that combine a beverage with a food item are a popular choice, McPhee notes. One such station features a chile-infused margarita served in a martini glass and topped with an open-faced taco made from a from-scratch white-corn tortilla, macadamia-crusted fish, grilled pineapple, cilantro and lime. “You pick up the taco and eat that in one or two bites, and then you chase it with the margarita,” McPhee explains. “The combination of flavors is really fun — we served it three or four weeks ago, and it got amazing reviews.” A similar option is a crispy plantain chip crowned with shrimp escabeche, served atop a shot glass filled with a scoop of citrus-jalapeno sorbet instead of liquor.

Brownstein shows off the bounty of autumn with a Tuscan station featuring seasonal foods including Concord grapes, pumpkins, gourds and loaves of focaccia as edible props, mingled with high-quality cured meats such as prosciutto and salami, smoked duck breast, assorted cheeses and dried fruit. The station makes the most of the season's rich flavors, and the look is “really harvest-y,” Brownstein notes.

Michael Rabe, CPCE, president of Honolulu-based Creations in Catering, says that shooter stations have been a huge hit recently. When creating the recipes, “We like to mix our island culture with Asian and West Coast ingredients,” he explains. The resulting shooters are served in shot glasses on glowing, ice-covered trays. The Lomi Salmon Salsa mixes cubed, salted lomi salmon, diced Maui onions and Thai-style chile sauce — “just to add a little zing,” Rabe notes; the Hawaiian Poke Punch is a medley of raw ahi tuna and ogo seaweed seasoned with sesame oil, a dash of sesame seeds for color and texture, and a splash of chile water and soy sauce.

While his shooter stations provide quick bites, Rabe explains that action stations give guests the opportunity to watch chefs at work. The Wok Around the Pacific station menu features a number of items with a Pacific Rim influence including deep-fried fish or vegetable tempura and sizzling stir-fries. At each station, a chef puts on a cooking show as guests watch — “Everything is cooked very fast, with lots of flame and smoke,” Rabe explains. Guests fill small takeout containers with different flavors of rice — served in large bamboo steamer baskets — then top it with that station's specialty. It has been very popular with his clients, he notes, because “people love to try different things, and like to move around and do tastings.”

While food stations have many positives, Brownstein hastens to point out what she calls “a big misconception” — namely, that stations are less expensive than sit-down meals. “You need so much food to really make it look fantastic, and so that the first person to the last person has a really abundant selection to choose from,” she says. “There's a lot more waste than {with} a seated dinner, where you have so much more control over portions.”