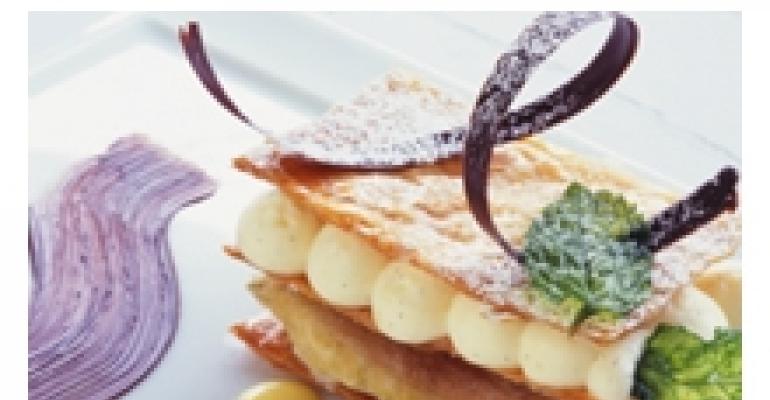 SWEET CHILDHOOD OF MINE

WHAT'S past is not forgotten, even in desserts. According to Alejandro Luna, executive pastry chef of the Boston-based Langham Hotel, “Chefs are bringing back classics in a more innovative or original way. It's like fashion.” His colleagues in the kitchen agree: They're looking back to move special-event desserts forward. Sky-high, over-the-top culinary confections have given way to desserts that stay closer to the plate, and hit closer to home.

Brian Thornton, pastry chef of the Ritz-Carlton Kapalua in Hawaii, explains, “Simple, non-complex, comforting desserts that remind us of our childhood spent with family have endured.” In fact, one of Thornton's favorite desserts as a child was strawberry shortcake, so he's created a version with sweet cornmeal cake served with sweetened mascarpone or sweetened whipped double cream. Hawaii's bounty has also inspired him to create a shortcake recipe using pineapple and a reduction of orange juice and white wine.

Luna goes for the ultimate in childhood nostalgia with his “PB & J,” which includes a toasted brioche topped with peanut butter mousse made with cream cheese to cut the sweetness. A Concord grape reduction and Concord grape paté-de-fruit accompany the dish along with a vanilla milkshake shooter.

While Luna and Thornton look to their childhood, Philippe Schmit, executive chef and partner at Bistro Moderne at the Hotel Derek in Houston, looks to his native France. Schmit has created what he calls “revisited floating islands,” which he describes as “an old French classic that Mom used to make at home.” He whips egg whites to create the “island” meringues and fills them with passion fruit caramel, which mimics the spun caramel that often tops the dessert. Toasted coconut coats the meringues, which “float” on a Key lime sauce. He also produces multiple renditions of the Napoleon: an apple version in the fall, raspberry in summer and strawberry in spring. Another one of his Napoleon creations incorporates chocolate nougatine glace, poached pears, pistachio and dried cherry into its layers.

Executive pastry chef Roy Pell of Phoenix's the Phoenician likes to mix things up with his Napoleons by using phyllo filled with crème brûlée — in fact, variations on crème brûlée are his specialty. “It's still crème brûlée, so everybody recognizes it, but we put twists on it,” he says. He offers a crème brûlée Napoleon with roasted pineapple and other versions with passion fruit or roasted pears. A particularly inventive variation is a coconut-flavored crème brûlée cooked in a dome mold. The center is caramelized, and the outside is dipped in white chocolate and then sprayed with dark chocolate. The result is a dessert that looks like a half-coconut.

Venturing beyond the familiar, guests also show “a preference for intense flavors, smaller portions {and} the use of nontraditional flavorings such as star anise or white peppercorn,” Thornton says, which “aren't blatant on the palate but give the dessert that extra boost of flavor that keeps people guessing.” Luna has experimented with “familiar savory flavors, for example, sweet basil ice cream or a walnut and sage cookie, {which} help enhance the flavor of the dessert by adding depth.”

A French trend that Schmit hopes to pioneer in the U.S. is “slate plates,” made from the same material as blackboards. “What's good about the slate plate is it can also be refrigerated, and it holds the cold,” he says. “When you put ice cream on it, it doesn't melt as quick.”

As for presentation, most chefs are getting back to basics. Thornton says, “I have been heading away from large, bulky presentations with skyscraper garnishes.” And while Schmit likes to “bring in a little bit of drama,” he also says, “I don't like a messy plate with too many things. It has to be sharp and clear.”

As for serving trendy foods at events, Pell warns against them because “trends come and go so fast,” he explains, a danger for event planners who have picked their menu months before. And while certain trends have staying power, they can be difficult to serve to large groups. In the case of trendy foam, for example, Pell says, “To do it for 1,200 people — and if they're sitting outside on our lawn — the foam is not going to hold up.” Still, there are ways around this. Pell has a recipe that includes gelatin, so he can “put it in the cooler, and it sets and it holds because you have gelatin in it.”

For his events, Thornton has served a roasted pineapple crisp for a banquet of 1,000. He describes it as a “thin, crispy caramelized puff pastry with a creamy vanilla center served with slow-roasted Maui Gold pineapple and house-spun crystallized ginger ice cream.” He adds, “It's nice to have in your resume some alternative desserts — vegan and especially gluten-free type desserts.” A vegan creation of his includes a caramelized-pecan-crusted warm chocolate cake with cherries and lime sorbet.

And while modern diets are certainly a consideration, the past can fuel whimsical creations. Luna regularly offers up fancy renditions of familiar candy bars at the “Chocolate Bar” in the Langham Hotel's Cafe Fleuri. The buffet is often re-created on a smaller scale for special events. For “Snickers ‘My Way,’” he starts with a base of thin, rectangular chocolate-sponge brushed with chocolate, then includes a white chocolate and caramel ganache, salty roasted nougat, a layer of tempered dark chocolate, nougat mousse and a quenelle of whipped chocolate ganache. “Almond Joy ‘Our Way’” uses the same base and includes a layer of coconut wafers, a chocolate and caramel ganache, roasted almonds, tempered milk chocolate, coconut mousse and a quenelle of whipped cream.

While taste is important, a chef also must keep in mind presentation. Pell tests many of his desserts in the restaurant before serving them at large events but warns clients that the visual elements of the desserts cannot be exactly replicated for multiple portions. For example, in his restaurant Pell offers a sesame-seed chocolate cake with a berry compote served with a crème brûlée and a port reduction. But if he was to serve it on a buffet, “The sauce would have to be put in a bowl or a gooseneck,” he says, but even then there's the concern that guests may not realize that the sauce goes with the cake. If that same dessert was served on a tray, Pell would approach the compote differently: “I would cook it down so it's reasonably thick, and add some extra pectin and do a little quenelle.”

While large groups have their culinary limitations, small groups can give dessert chefs more flexibility. Once Pell created a Halloween-themed meal for a private party of 10 featuring a “graveyard” dessert consisting of chocolate sponge and vanilla ice cream covered in crushed Oreo “dirt,” accented with a chocolate tombstone and a little chocolate hand clawing its way out of the “grave.”

Schmit notes that the popular “deconstructed desserts” — where chefs “break down one dessert, and you have to taste the three different elements separately to get the whole feel of it” — can work for small groups. He offers a “Parade of Coconut” that includes a marshmallow with coconut, a coconut sorbet and a coconut crème brûlée served with chocolate cake.

Whatever the concoction or how it's served, Luna offers advice for what he believes is the most important part of the meal: “You don't want to mess with a person's dessert!”