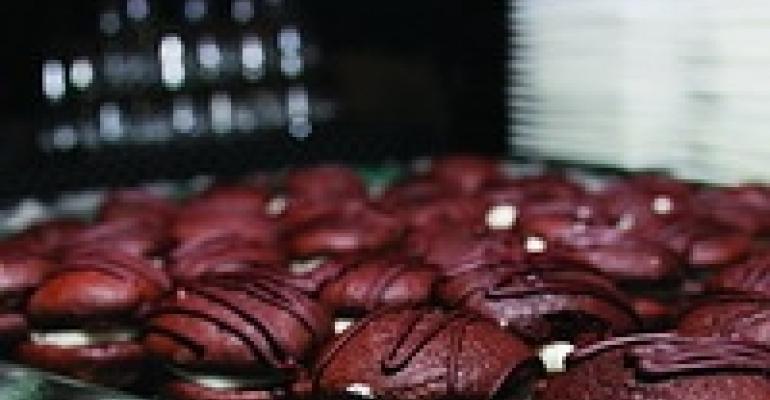 Forget super-sizing. If you want to throw an on-trend party, make desserts small, and make a bunch. Here, caterers tell us all about the tiny dessert trend.

Who says a small dessert can't leave a big impression? Philip Owens, menu designer for Rhubarb Food Design Ltd. in London, says grouping tiny desserts together creates both visual impact and a talking point for guests. Kristy Choo, pastry chef and owner of Jin Patisserie in Los Angeles notes that besides being attractive, smaller portions allow guests to taste a wide variety of desserts and are “easy to pick up and eat in a casual setting.” And Kay Benson, general manager of Boston-based East Meets West Catering, cites one huge reason guests like their sweets small: “Less calories!”

Even a meal's downsized finale can offer flourish. A shot glass makes an attractive showcase for desserts with layers of different colors, textures and flavors, Choo says. For example, she fills small glasses with layers of mascarpone cream, peach compote, passion fruit jelly and almond crumble. Benson's company opts for another drinking vessel to present dessert; her company serves chocolate mousse in an espresso cup with a wafer-thin, zigzag-shape cookie stuck in the mousse to represent the espresso steam.

Rhubarb likes to set desserts spinning. An 18-inch-high revolving carousel smack-dab in the center of the table serves up desserts in individual goblets. A Rhubarb carousel might offer sloe gin ice cream, pistachio brulee with a chocolate wafer, and caramel-glazed apple and raisin tartlets. For the May “Sex and the City” movie world premiere in London, Rhubarb created an 18-inch rhinestone-studded carousel that included Cosmopolitan-flavored granitas, the signature cocktail of the famous foursome.

And sometimes dessert needs no accessories — the dessert itself makes a visual statement. East Meets West is known for its coconut “sushi,” where chocolate replaces the seaweed wrapper, a coconut mixture serves as the rice and dried fruit takes the place of the fish.

Choo has dreamed up an equally creative presentation. She notes, “It has not been done yet — it's just in my imagination” but hopes to make her dream presentation a reality with the opening of her new store this summer. The presentation will include cone-shaped glasses containing desserts suspended from a bonsai tree with clear strings.

WHO LEFT THE CUPCAKES OUT?

Although event pros have predicted the end of the cupcake craze, the public can't seem to get enough of the pint-size sweets. So what's the current word on the cupcake?

Both Owens and Benson say they still get plenty of requests for cupcakes, with flavors and designs becoming more extravagant, Benson notes. Costs range between $4 to $10 a pop. But Choo sums up her feelings bluntly: “I am not into cupcakes.”