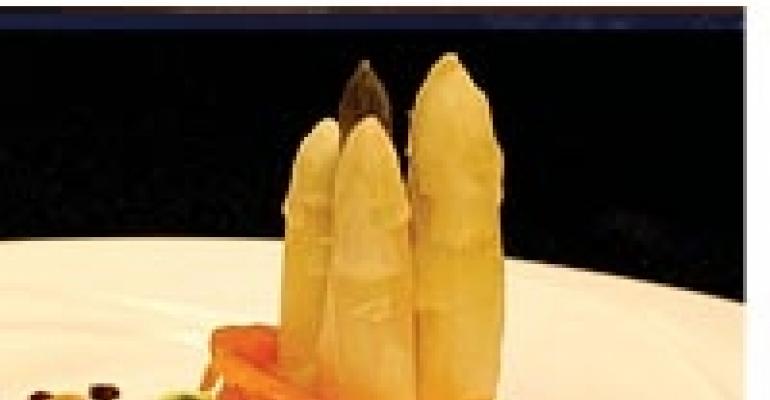 From local to global to completely out there, anything can inspire a food trend. Below, event experts talk about their favorite flavor fads and how they make the most of them in an epicurean world.

THE SCOOP: This herb from southeast Asia and India adds spicy, minty notes to dishes, according to executive chef and owner Tammy Huynh. Her use of the herb in the restaurant's perilla-infused strawberry shortcake is part of the current trend of adding savory ingredients to desserts. Huynh notes basil, lemon grass, bay leaves and Vietnamese cilantro are also good options for adding spice to your sweets.

THE SCOOP: The rare white asparagus — a source of vitamins A, B, C and iron — hails from France, where it is preferred over the more common green variety. According to director of food and beverage Robert Stanfield, the vegetable is “shielded from the sun by mounding earth around the plant, and the stalks develop entirely underground, producing a sweet flavor and remarkable texture.”

THE SCOOP: Executive chef Koji Oishi makes good use of local Hawaiian goods, which are becoming popular throughout the world. Moi, farmed through aquaculture, was served to the ali'i — or kings — of Hawaii in ancient days. Ogo is a seaweed used in the popular Hawaiian poke fish salad. And alaea salt, according to company president Michael E. Rabe, is a red rock salt harvested from ocean salt flats on the island of Kauai. It gets its color from volcanic clay and has a slight mineral aftertaste. According to Rabe, the yam-like taro root, brought to Hawaii from Micronesia, is older than rice and potatoes and is considered “the original staple.” Rabe attributes guest appreciation of such exotic fare to “globalization and fusion in the epicurean world.”

COMPANY: A Thyme to Cook

THE SCOOP: With one of the largest black currant farms in the United States down the street from A Thyme to Cook, the catering business doesn't have to go far to find its new favorite fruit. Company president Linda Sample prefers the antioxidant-rich berry, related to the gooseberry, over “the overused pomegranate” for glazes on duck and lamb. Sample's penchant for using black currants is due to “a strong trend to take an ingredient out of the norm for use in a different realm,” she says.

THE SCOOP: Heirloom tomatoes — known for having unique tastes, flavors and shapes — fell out of favor for more than 50 years because they lacked the market appeal of more uniform tomatoes. The recent popularity of heirloom tomatoes demonstrates a preference toward organic and locally grown produce, notes Brad Parsons, executive sous chef. “This is a long-term change in consumer lifestyle and not something that's going away,” he says.

The Next Big Things

Here's a list of other ingredients caterers see making a move into the mainstream: