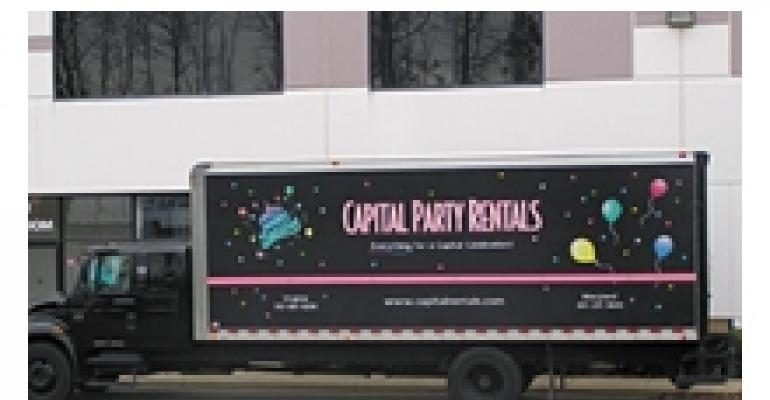 “A typical 40-truck fleet can be paying as much as a million dollars more for fuel now than they were two years ago,” according to Alex Walker, CEO of Toronto-based Cube Route's on-demand logistics management service. Party rental companies feel the burn not only from rising fuel costs but also wasted time and stressed-out clients. Modern-day demands require party rental companies “to figure out a way to do things better, and technology is just one of the ways to do that,” Walker says.

Cube Route is a Web-based service that helps party rental companies and other fleet operators efficiently route their trucks so they can get where they need to in a timely fashion. A wireless device tracks vehicles, and drivers clock in when they hit various locations on the route. As a result, management knows exactly how far ahead or behind schedule deliveries are.

Walker cites the main reasons fleet managers use Cube Route's services as “The Three Cs”: to reduce cost, improve customer service and diminish complexity in a market that has become increasingly demanding, with customers wanting more frequent deliveries at specific times. Because of these factors, “the margin for error has gone down significantly,” he says.

Dave Stuckey, chief operating officer of Dulles, Va.-based Capital Party Rentals, has used Cube Route for the last year and a half. His company operates as many as 18 vehicles during its busy season to supply events ranging from backyard weddings to large-scale festivals in the metropolitan Washington area. He notes how inflexible the party rental business is; when events take place in locales such as public parks, the goods “have to be there,” he says. “There's not a place for our customers to store the products, and they {usually} have two hours to set up 100 tables, tablecloths, things like that. So the delivery is critical.”

According to Stuckey, Cube Route has allowed Capital to “narrow our delivery windows and start hitting them.” The system's automated call-ahead feature gives customers a two- to three-hour window to let them know when to expect the delivery. Stuckey explains, “Before {Cube Route} you said, ‘Delivery is between 9 and 5.’ Now they'll get a phone call that says, ‘Your delivery will be there between 9 a.m. and noon.’”

One Capital client at the University of Maryland, who works with events at various locations on campus, expressed his appreciation of the call-ahead feature to Stuckey because “it's an automatic voice mail — he can just forward that to someone, and it's taken care of.” Stuckey also likes how the system identifies potential problems. Thanks to the service, Capital has known “three hours ahead of time a driver wasn't going to make a delivery that was critical, so we've actually loaded another truck and sent it out, and the customer was satisfied that way.”

In addition, the system enables operators to plot delivery routes more efficiently. Stuckey says that Cube Route helps him analyze and organize data according to traffic patterns, zip codes and service times. He says, “It certainly saves cost in fuel because if you're only 20 minutes between stops versus an hour,” that makes a big difference in fuel costs. Not to mention, “You're paying the drivers the whole time,” he adds.

Capital examined other services and decided on Cube Route due to its competitive pricing, ability to integrate with point-of-sales software and the thoroughness of the service. Stuckey mentions with other services, a person can ask, “‘Where's my truck?’ and you can look and see where it is, but it doesn't analyze your service times, your on-road times, your stops per vehicle — it just gives you a physical location.”

While Stuckey is a champion of Cube Route's service, he says that it has vulnerabilities, noting it's “an Internet-based product” and “human-dependent.” At one point, Stuckey's Internet connection failed, which brought operations to a halt. He has avoided that problem by getting a laptop equipped with a wireless card. In addition, the service relies on drivers to clock in their times, making them more accountable. Stuckey admits, “The drivers initially weren't too keen on it.” Still, he turned the issue — which he believes is a natural reaction to change — into a positive. He's created programs with incentives for those who clock the right times and believes the drivers have a sense of ownership in the program now.

Stuckey views the Cube Route system as paying off for both his company and his clients. “Basically, it has increased our customer service,” he says. “It's certainly increased our efficiency with deliveries, which — bottom line — lowers cost.” And, while customers “don't see the cost savings that we see, they see the fact that we're hitting our deliveries,” he adds. “We're telling them when we're going to be there, and we're actually doing it.”