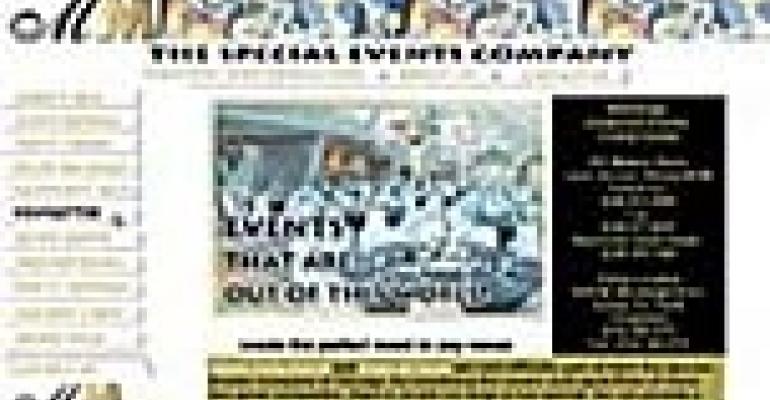 It was 1999. Internet stocks were hot, the event business was sizzling, and more and more party rental companies were launching Web sites.

In our September 1999 issue, Special Events Magazine looked at several sites to see how they were helping make the party rental business hum. Four years later, much has changed, including how business uses the Web. Here, we revisit those sites to see what's new and what's still working:

M&M The Special Events Co. of Carol Stream, Ill., took its good site — www.mmspecialevents.com — and made it even better. After acquiring Dallas-based Abbey Party Rents/Props of Texas in February, M&M has adopted several features from the Abbey site, including an e-mail newsletter and a “quick quote” option, according to M&M president Mike Berk.

There are more changes in store: M&M is reworking both its sites into one that will be accessible for users in both locations. Also, “We are planning to add an event calendar feature where we will invite all charities to list their events so that others can check to make sure there are no conflicts,” he notes. “It is another reason to visit our site on a regular basis.”

Berk believes that although the event industry is slower than many to embrace the online world, that situation is bound to change. “I would guess that within the next several years, we won't print paper catalogues and brochures, which will enable us to update more quickly and keep them much more timely, and at a substantial savings in cost,” he explains.

In contrast, AA Party Rentals, Seattle, has made very few modifications to its straightforward site — www.aaparty.com — since 1999, and has even made the site simpler to use. For example, AA dumped its “shopping cart” feature that enabled caterers to order online. “It never was used much; it seems faster for the caterers just to call in,” explains Jeff Treece, a veteran AA salesman. The only major changes to the site in the last four years have been updates in color and layout, he reports.

But the simple approach seems to do the trick. Back in 1999, the AA site received some 100 hits a month; that figure has increased to 1,000 a month today, Treece reports. And the site acts as a virtual sales brochure. “We don't send out nearly as many brochures as we used to,” he says. “Customers love the convenience of being able to look up the site right when you're talking to them.”

The Web site of Flemington, N.J.-based Celebration Party Rentals — www.celebrationpartyrentals.com — used to rank last as the company's source of new customers; “It's now second,” reports president Megan Jones, ahead of the company's Yellow Pages ad and its trucks, and second only to referrals from current customers.

Jones keeps a good thing going by continually adding new elements to the site. New on the site are a “tell a friend” referral feature that enables users to e-mail the Celebration URL, and a slide show demonstrating a tent installation. Within a month, Jones plans to add a “new product premiere” page, which will showcase new inventory. “I think the idea of showcasing new product is a simple way of getting out your new items,” she says. “Hey, if you don't let your customers know you have it, it won't rent.”

Something Special from Special Events

A revamped Special Events Magazine Web site (www.specialevents.com) made its debut in June, “an overhaul that was overdue,” says publisher Lisa Perrin.

The old site (below) enabled users to check out news, browse back issues and link to The Special Event. “But our readers look to the magazine to do more, so our site had to do more,” Perrin says.

The revamped site not only presents the latest news and article archives going back five years, but also offers easy-to-use tabs that take users directly to information on subscriptions, advertising and the Gala Awards. Because so many readers turn to the magazine for “event inspiration,” Perrin says, the new site categorizes the magazine's articles into more than a dozen subject areas, including “Fairs/Festivals/Picnics,” “Corporate Events” and “Event Equipment.”

“With lead time for producing events growing shorter, we wanted to get information to our readers as quickly as possible,” Perrin says. “We want our Web site to be as valuable to the event community as Special Events Magazine has become.”