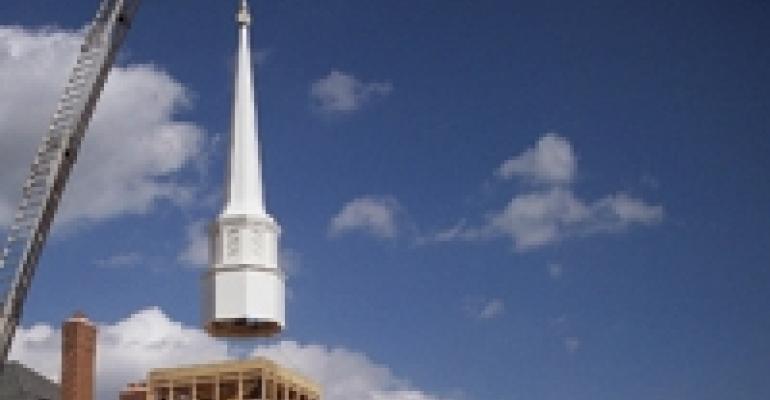 When the client's only daughter says she wants to be married at home on the family ranch, then it's up to the event team to bring the wedding home, right down to the chapel.

To make the most of the waterside views for the 330 guests, the event team decided against one expansive tent for the reception/dining area, turning instead to 8,700 square feet of tenting on three levels — a foyer leading up a few steps to the main dining area and then up to the band/dance floor. Glass walls and a wraparound patio allowed guests to take in the view.

The highlight of the installation was the chapel: a 50-by-147-foot structure complete with steeple, stained glass windows, wooden beams, wood-paneled floor and rows of wooden pews. To help the remodeling project at their local church, the bride and groom donated the steeple and pews to the church after their wedding.

The chapel was so beautiful that the local building inspectors mistook it for the unpermitted construction of an actual church. While clearing up confusion set the installation back one day, “We were pleased we were creating an authentic chapel, just as the bride requested,” a Classic spokeswoman says.

Jumeriah Group's iconic Burj Al Arab hotel is an architectural jewel of Dubai, United Arab Emirates. So the tent installed nearby to celebrate the holy month of Ramadan had to be a gem, too.

In concert with Dubai-based Wicked Tents, Tentnology of Surrey, British Columbia, brought its engineering expertise to bear on the project, installing 21,520 square feet of space in September on the beach in front of the hotel. The multipurpose installation had to provide a shopping area (the traditional “souk”), a VIP reception area, and corporate and private dining areas for 1,000 guests. The event team devised a structure composed of five main tents — based on the company's Saddle Span frames — two joining covers and one open tent, which functioned as an entrance arch. In addition, eight 20-by-20-foot marquee tents acted as kitchens, bars and service areas for the catering staff while three 10-by-10-foot tents offered privacy for those at prayer.

Siting the structure on the sand forced the event team to install decking. The team opted to build a nearly 38,000-square-foot scaffolding platform, which acted as the base for both the main and ancillary tents and provided raised entrance walkways and viewing terraces. In an added twist, the client asked for three sets of panoramic windows for the structure to take advantage of the water view. The event team responded by developing special hardware to create solid window frames, where the 25-foot-tall clear window walls showcased a breathtaking view of the Burj Al Arab.

Although international projects are prestigious, they present practical challenges. While the tent was en route from Vancouver, British Columbia, to Dubai in its 40-foot container, the shipment was detained in Hong Kong. To stay on schedule, the event team had to make quick — and costly — arrangements to have the structure unloaded, repacked and sent as air freight.

IT'S A POLITICO'S PLAYGROUND

For a private reception during the Republican National Convention in Minneapolis in September, one event team took the politicos out of the smoke-filled room and into an airy outdoor lounge. For the Sept. 1 cocktail reception, the event team crowned nearly 5,000 square feet of stage deck — installed on an outdoor courtyard on the client's corporate campus — with a 66-by-50-foot see-through clear-span.

The team of Atmosphere Events, Apres Party and Tent Rental, and BeEvents, all of Minneapolis, set the stage deck at varying heights to create lounge seating, softened with fuzzy throw blankets and pillows. The 1,600 guests relaxed inside a light-filled space thanks to 24 chandeliers suspended above and LEDs installed below acrylic tiles set in the floor.

The centerpiece of the lounge was a 16-by-4-foot reflecting pool complete with four fountains. Stage deck served as seating around the pool, defined by a custom acrylic surround glowing from within thanks to LEDs. Acrylic chairs and tables and an oversize modular acrylic bar kept the glow going. “The space maintained an open feel, and light was reflected and refracted through the space,” notes BeEvents head Ryan Hanson.

The annual party that cable powerhouse HBO hosts after the Emmy Awards has been a hot ticket for years. The challenge for this year's event, held for 600 guests on Sept. 21 at the Pacific Design Center in Los Angeles, was simple: Just top yourself — again.

Standing out even among the Pacific Design Center's vividly colored buildings was the event team's 100-by-100-foot clear-span structure, cloaked in custom turquoise vinyl. Specialty turquoise fabric also covered all auxiliary catering and support tents, continuing the hue of the event's carpet and linen. Additionally, all the tent and structure framework on the site was wrapped in the same turquoise vinyl, an Aztec spokeswoman says, “so the guests were unable to detect where the tent stopped and the event began.”

Google — the Mountain View, Calif.-based company that dominates Internet searches worldwide — thinks big. For its holiday party last year, the company wanted to host as many of its 19,000 employees as possible. It took a tent company that thought big to help pull it off.

The site — a parking lot at the local outdoor music venue near Google headquarters — was capacious but charmless. The event team, which included Top Productions, keyed on an “outer space” theme, and the tenting helped set the scene.

The structures included three main clear-span party tents — a 120-by-300, a 100-by-300 and an 80-by-180-foot. These housed the Solar Galaxy party room, the Space Station entertainment tent and the '50s-era Space Age Lounge. The 20-by-300-foot hallway tent — called the Worm Hole — connected the party tents. The party room and connecting tent were lined in black fabric trimmed with keder that slipped onto the second track of the clear-span, creating dramatic interiors that were entirely black.

To serve 6,000-plus guests who attended each night of the two-night party, the event team put another 30 tents on the site to handle production, catering and storage. The job required nearly 100,000 square feet of flooring and decks, which the team installed in distinct levels inside the tents to add character. Accents such as glass doors gave the tents the look of solid structures rather than makeshift spaces.

The Google party is its biggest event to date, the Top team says, “and we were honored to bring the collective vision of the producers to light.”

AND IF YOUR TENT IS NOT SO BEAUTIFUL ….

Stuck with a so-so space? Printed velon from San Francisco-based Velon Designs is designed to offer all the flexibility of high-end textiles to line tents, cover bars and disguise trash cans, but at low cost. And it's resuable, washable, waterproof, flame-resistant and recyclable. In-stock prints and colors are available, along with custom work. The company just debuted its 2008 Holiday Collection. Visit www.velondesigns.com.