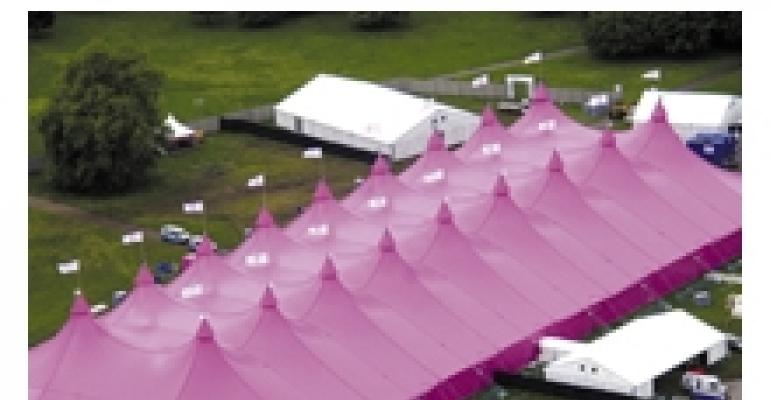 TENTS are more than simple shelters. In the hands of event professionals, they are blossoming into spectacular sites in their own right. Here, four beautiful tents make for four beautiful events.

At 500 feet by 200 feet, it makes a big impression. Not only is it big, but it is a traffic-stopping azalea pink. “It” is the dramatic Pink Galaxy tent from De Boer International, based in the Netherlands. The Pink Galaxy made its debut in May in London's Hyde Park, where it served as the staging area for the Playtex Moonwalk. The event brought out 15,000 walkers — many wearing brightly colored brassieres — to march through the park at night to raise funds in the fight against breast cancer.

Due to restrictions on using London's Royal Parks, the tent crew gained access to the installation site less than a week before the event. Within two days, the team had put up 18 huge “king” poles and more than 250 smaller “queen” poles. More than 50 crew members from De Boer, including four specialists from the Netherlands office, lifted the roof of the Pink Galaxy into place. Next, lighting and staging were brought into the structure, then the side curtains and doors attached.

The structure is designed in individual sections of 200 feet by 50 feet so it can be configured as needed for different events. The Moonwalk used the structure's full capacity of 97,000 square feet of floor space.

The Pink Galaxy's color is more than beautiful — the color pink is symbolic of the fight against breast cancer. “I jokingly said to {De Boer chief executive} Koos Tesselaar that it would be really nice to have a giant tent in our corporate colors,” Moonwalk founder and organizer Nina Barough says. “But I never dreamt for a moment that he would go away and actually create one for us.”

Much of the power of tents lies in their ability to create enchanting event venues where none existed before. Harlequin Marquees of Dubai, United Arab Emirates, created such venue magic last September — an oasis in the desert for 80 guests at a corporate product launch. The event just received a Gala Award nomination in the category “Best Tent Installation: Tent Budget Under $75,000.”

The evening began with a ride over Dubai's sand dunes to an Arabian majlis, or reception area, complete with several small canopy tents decorated with rugs and scattered cushions. As the sun set, guests sipped champagne and listened to storytellers describe a mystical oasis nearby. The guests then mounted camels to ride to the oasis itself, dubbed “Mystique.” An entrance flanked by flame torches and palm trees led to an air-conditioned dining tent complete with lounge seating and a white star-cloth ceiling. Floor-to-ceiling window panels enabled guests to gaze out at the desert night.

But there was nothing magic about the installation; instead, hard work did the trick. The installation took 10 days in temperatures as high as 115 degrees Fahrenheit. “The soles of the boots of the workers were literally melting in the heat,” reports Harlequin managing partner Carmen Clews. The first three days were devoted to leveling and compacting the ground to lay the floor; only then could the marquee, generator and air conditioning go in. A four-wheel-drive truck made frequent trips across steep dunes and soft sands to bring in supplies. “It was far away from any shops or cafes, so everything required for the next day had to make the journey the first time,” Clews says. {For an interview with Clews, see page 66 in this issue.}

When event producer Inna Poncher saw the beautiful setting for her client's dinner — the historic mission in Carmel, Calif. — “I had the whole party designed in five minutes,” she says. But the beautiful area came with an ugly side — unpredictable weather. Even though the sit-down dinner for 520 was slated for late July, “The weather in Carmel Valley is very iffy,” she explains. “It can be clear and sunny but in 15 minutes turn so foggy that you can't see a few feet. It would be a risk to the integrity of your event if you didn't tent.”

The team from Los Angeles-based Poko Event Productions protected its party with a series of clear canopies over the mission's rear courtyard. Supporting the canopies were 12-foot-tall perimeter poles decorated with painted foam to resemble the mission's pillars. Hanging from the tent top were wood and iron chandeliers modeled on the mission's architecture, while between each pole a 4-by-6-foot lighted frame created a “window” effect. Amber lighting with cerulean accents projected onto the courtyard fountain completed the look.

In the end, “Clear plastic tents are clear plastic tents,” Poncher says. “But we didn't want to give that feeling. All the decor elements were custom-made or purchased from exclusive suppliers that combined into a completely unique, individualized look.”

Sometimes the best-laid plans for beautiful tents are ruined not by weather, but a piece of paper. It was a permit — or, more correctly, the lack of one — that jettisoned the plan for a dramatic, 160-foot-wide circular tent for the Sept. 9 gala celebrating the opening of the Nashville {Tenn.} Symphony's Schermerhorn Symphony Center.

The tent plan had worked well before; Torrance, Calif.-based Classic Tents had made news with just such a structure at Elton John's Academy Awards party in Los Angeles last year. But Nashville city officials were skittish about replicating the structure in the large grass field just outside the Schermerhorn. The park's soil sat atop a three-level underground parking structure, which was protected by a waterproof membrane. The officials believed the structure would be too heavy, and they would not authorize staking.

Despite the setbacks, the event team was determined to move forward with the park site. Classic Tents vice president of sales Howard Tabackman came up with a new, oval-shaped tent, and turned a negative into a positive — using the underground garage's foundation piers to provide support for the tent's base plates. Classic redesigned the 100-by-160-foot structure to reduce weight and reposition its anchor drilling points just three days before the company's trucks left California for Tennessee. Only hours before the trucks arrived in Nashville, the city approved the plans — not without a last-minute decision to require boom cranes in place of forklifts to protect the park's topsoil.

With air conditioning keeping out the evening's heat and humidity, 800 guests dined beneath the stars thanks to the event team's blend of flexibility and determination. “We rallied around the clock for days at a time to make this structure a reality,” Tabackman says. “And after seeing the result, it was worth every second.”