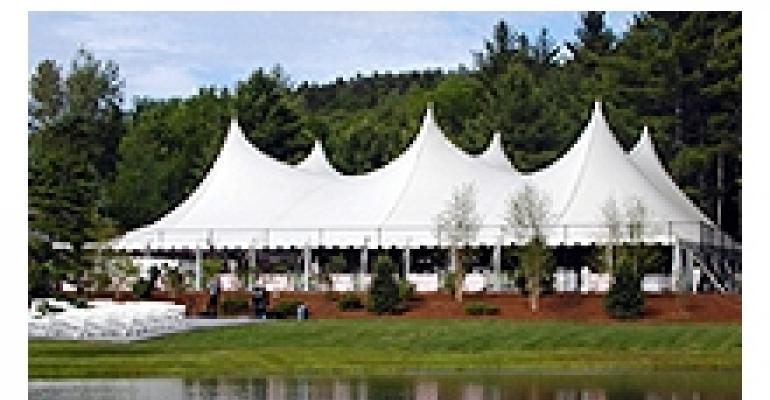 TIGHT SPACES, RIGID restrictions and daunting design directives. Behind every exceptional event tent is a tale of hard work and harrowing challenges. In these pages, tent experts share details from some of their most difficult — and gratifying — recent projects.

Three weeks to event date, not a blade of grass on-site and one of the region's rainiest Junes on record. That was the scenario that South Burlington, Vt.-based Vermont Tent Co. faced last spring as it prepared to set up 25,000 square feet of structure for a wedding on a private Stowe, Vt., estate.

With the property undergoing a major renovation, “When we got there to look at it, we were up to our ankles in mud,” says director of sales Mike Lubas. “There were so many things we couldn't know until the absolute last minute.” These included lawn slope, not to mention the lawn itself — sod was laid down a day before the tent team arrived for its multi-day install.

Posing the toughest challenge was a 60-by-80-foot Century structure, which had to be installed on 4,800 feet of elevated flooring — a late-stage change made to deal with a much steeper slope than called for in the original tent plan. The job required a recalculation of ratchet strap lengths to compensate for the addition of seven extra feet of height to the structure's 8-foot-tall legs. On the plus side, “Everything except for 10 inches of topsoil was solidly filled — it was very good for staking,” Lubas says.

At another northern wedding — this one a multi-day celebration in Toronto — aiming high was the order of the day. Why high? To clear a 32-foot-tall traditional Indian ceremony platform and 20-foot-tall tree, of course, says Michael McCullough of Stoney Creek, Ontario-based Regal Tent Productions.

These were the obstacles that had to be incorporated into two of the many tents — 22,000 square feet of tenting total — that included structures for valets, children, an Indian marketplace and a cigar lounge.

To rise above the platform, or mandap, Regal erected a 328-by-164-foot clear-span atop 17-foot legs, resulting in a tent measuring 35 feet high at its peak. As for topping the tree, the tent company outfitted a structure with a custom roof panel to allow approximately five feet of leaf and limb to extend through the liner and out of the roof.

Add to that the use of a 60-foot crane with a 95-foot boom — required to lift equipment including frames, fabric, flooring and generators over the private home's grounds — and it's no wonder McCullough humbly calls this event “pretty major.”

It wasn't the overhead but the underfoot that tested the mettle of McCook, Ill.-based Chicago Party Rental as it worked with client Pittsburgh Party & Tent Rental on a Pittsburgh wedding this fall.

With about 12,000 square feet total tent coverage, all set up in a public park, Chicago Party Rental's proudest accomplishment was installing more than 900 sections of parquet dance floor to lie beneath an 80-by-90-foot Eureka! Genesis pole tent, says director of marketing Valerie Braun. The flooring, combined with more than 500 sections of Bil-Jax staging, created continuity in the multi-tent complex, she says. Also essential to streamlining was the use of 10-foot side legs connected by a guttering system that involved a combination of kedered groove and standard hook. Altogether, the tenting “created a unified look,” Braun notes.

From matrimony to media frenzy, turn to the 2004 Democractic National Convention and the work of De Boer Vinings.

For Boston's ultra-high-profile July event, the Atlanta-based tent company turned out a temporary pavilion to house the 1,800 media members on hand for the party's party. The two-story 150-by-330-foot structure, built on a vacant lot adjacent to the Fleet Center, provided nearly 100,000 square feet of air-conditioned work space complete with electrical, phone and data wiring, and ADA-compliant lift service.

Security, union labor and permitting issues were huge. To negotiate special union exceptions, for instance, De Boer forklift drivers had to undergo physical exams and pass the Massachusetts State Forklift Safety Test. On top of that, De Boer had to establish an 18-foot fire lane around the entire structure and ensure that installers wore hard hats, steel-toe boots and, when elevated, a life line, during the complex setup.

Still, company president John Keller cites load-in as the job's greatest challenge. With the tenting area wedged in between the Fleet Center and the city subway's North Station, “Coordinating 30 semi trucks delivering parts in a precise order became even more challenging than usual, as there was no room for more than one truck at a time.”

Posting product images on your company Web site is a great way to give event designers an intro to your inventory. But getting planners' creative juices flowing can pose its own set of challenges.

So how did the Aztec crew make the design vision a reality? Interlocking tents, Sala says. The 45,000 square feet of tenting his team installed in the parking lot of Dodger Stadium included things like “a 100-foot-wide tent that would drop to 80 feet, then 60 feet, then 40,” with custom panels at tent ends. As for anchoring, “with these types of buildings, all those intricate sizes, we had to put base plates within four inches of each other to get the shapes they wanted. It really needed to all be staked.” Fortunately, with a parking lot as the install surface, that wasn't a problem.

When the crew from Surrey, British Columbia-based Tentnology arrived on site at the Athens Olympic Games, much of the company's work involved covering up lesser-quality tents that had been manufactured in China and Malaysia, says co-owner Suzanne Warner. “Because [the tents] were so cheap, the Olympic Committee insisted that any high-profile event have much more beautiful tents — the ‘eye candy’ tenting,” she explains. “That was us.”

Most notably, Tentnology installed a system of nested hexagonal, triangular and diamond-shaped tents erected on 14-foot legs over existing tents at the security-check entrance to the Olympic village. To conceal the “huge” guy ropes required for the structure, Tentnology created stretched- fabric sails, which “created a beautiful effect, but were also a safety element,” she adds.

The blending of form and function was similarly critical to a structure set up by Tucson, Ariz.-based Prime Event Group as part of a multi-day, two-city product launch event for luxury automobile client Bugatti. The 40-by-100-foot Roder clear-span, installed at Laguna Seca Raceway in Monterey, Calif., was built on an 18-foot-high, 60-by-120-foot scaffold-and-staging platform. The raised platform didn't just level the uneven asphalt surface, it actually met a last-minute demand for a discreet yet fully functional catering kitchen, conveniently concealed in the space beneath the platform, explains account executive Andrew Soffe.

And while VIP race attendees were blind to the kitchen below them, says Soffe, they were privy to a far more thrilling sight: Bugatti's newly unveiled $1 million-plus Veyron sports car, viewable through the clear top of the adjacent, non-elevated “Bugatti garage” structure. As for the general public who milled around the opaque-sided garage tent pre-race, well, they'd just have to cool their jets until go time.