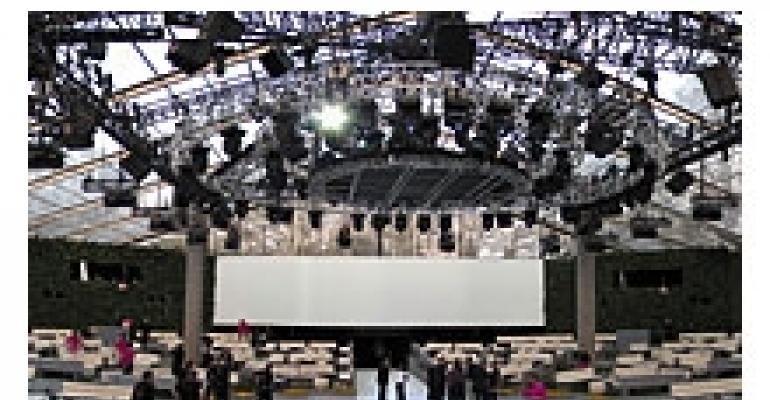 LOOK around and you'll find tents everywhere. Once limited to garden parties and golf tournaments, tent structures are showing up on city streets, in public parks, even attached to the sides of exhibit halls. But along with the diversity of tent uses comes a raft of logistical and installation challenges. In this month's cover story, tent experts talk about new tenting opportunities, and the obstacles that come with them.

From a 132-by-132-by-25-foot clear-span to a 15-by-60-by-10-foot frame tent and just about everything in between, Stoney Creek, Ontario-based Regal Tent Productions outfitted clothing retailer H&M with every shelter it needed for an April fashion show in New York's Central Park.

According to Regal's Gregg Chipman, client KCD Worldwide, the event's producer, came to Regal a full year before the event asking the tent-maker to create a “secret garden theme, in which guests felt as if they were crossing a threshold into another world when they entered the tent.” There was just one problem: The real world in which the tent had to be constructed had installation obstacles aplenty.

For starters, there was the 25-foot height of the main clear-span tent, which required new design, engineering and manufacturing of leg-to-rafter supports, Chipman recounts. The supports, attached with 10 bolts, weighed 1,800 pounds each. “With this weight, the braces had to be positioned using a forklift in order to be attached to the frame,” Chipman says.

Then there was the Central Park Conservancy, which oversaw installation around the clock. To comply with the organization's demands and to ensure that the park was sufficiently protected, Regal didn't just replace stakes with concrete weights and hire walkers to accompany load-in trucks along the narrow path to the site, Chipman says. Instead, “We had a 65-foot-tall man-lift with two staff in fall-arrest gear dedicated to carefully lifting by hand any branches in the trees that were in danger of being damaged when the main tent was being raised.”

Basing its work on research conducted through the Philadelphia Historical Society by event designer Affairs To Be Remembered, of Broomall, Penn., Select set up three 40-by-100-foot frame tents, guttered together, to represent Colonial Philadelphia circa 1723, the year Franklin arrived in the city, explains Select's Dave Buckley, CSEP. Select also created structural sets designed to encase all the tent-framing hardware, conceal portions of the tent vinyl and camouflage cement anchoring weights.

According to Buckley, installing the complex series of structures, which also included 12 marquees and a 20-by-30-foot frame tent for entertainment, demanded speed and skill. “Initially setup was to begin at 2 a.m. and be completed by 7 a.m.,” he recounts. However, “Due to police department activity coupled with patrons closing their favorite Philly hot spots, Market Street was not completely closed until 2:45 a.m.” On top of that, the early morning install met with a severe rainstorm, he says.

Although tenting public events can be highly challenging, in the face of the events' “rain or shine” schedules and access restrictions, Buckley says the market is one he will continue to pursue. “The Philadelphia economy and tourism sector points to significant growth in the years to come,” he states. “With consolidation in the tent and party rental industry a factor, fewer organizations are capable of achieving the results dictated by this growing market.”

On the other side of the country, Burlingame, Calif.'s Classic Party Rentals took tenting to a new level of artfulness, creating a contemporary tented addition to the San Francisco Museum of Modern Art for the museum's inaugural Modern Ball.

Working with San Francisco event designer Stanlee R. Gatti, Classic provided both a clear-span and a clear-frame tent, which were installed on each end of the museum's “Art Corridor,” according to Classic general manager Susan Kidwell.

The 80-by-85-foot clear-span was particulary noteworthy for its challenges, Kidwell notes. Among them was the tent's one-time-use liner, “the creative idea of Stanlee R. Gatti — Classic Party Rentals was given the opportunity to realize it,” she says. Her team manufactured the liner using 2,000 yards of silk-screened fabric in stripes of cerulean blue, chartreuse, yellow oxide, magenta, black and white. “Each panel required exact measurements for sewing and exact positioning of the perlins to ensure that the liner fit the frame, and each panel was sewn and installed separately,” she adds.

The complex custom tent job didn't just look pretty, it also contributed to the event's ultimate goal. “Fund-raising opportunities were a major consideration in designing the event,” Kidwell says. The stripe-lined clear-span, for instance, gave top-ticket-price patrons an exclusive venue for their lavish dinner, then was later turned to accommodate entertainment for general attendees. The clear-frame tent provided a site for holders of a different tier ticket price to enjoy cocktails and a DJ.

For the Outdoor Retailer Summer Market at the Salt Palace in August, Tempe, Ariz.-based Prime Event Group installed 100,000 square feet of clear-span tenting on a concrete pad that happened to be the finished floor of the exhibit hall expansion, scheduled to open in 2006. “The pad was up to 20 feet above grade in some places, requiring extensive use of cranes,” says sales manager Murray Hamilton.

Height wasn't the only challenge Prime faced. Because the tenting surface was newly engineered, the Salt Palace prohibited the use of penetrating fasteners, which would void the floor's warranty, Hamilton explains. The only viable alternative, he says, was to use 1.6 million pounds of ballast and custom base plates. However, he adds, “steel plates on fresh concrete are pretty slippery. Unless we figured out a way to increase their coefficient of friction, we would have had to just keep piling ballast blocks one on top of another” in order to contend with wind-load issues. The solution: adapt a synthetic polymer material used in the transportation industry.

The resulting structure, which was larger than anything Prime had built before and helped accommodate the event's 30,000 attendees, “required the complete rethinking of how we install buildings,” Hamilton says.