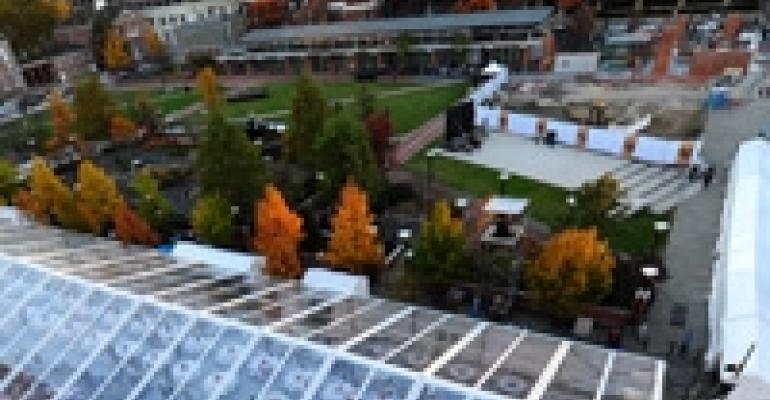 What Can a Tent Do? Almost Anything for Special Events

It's a ballroom, it's a ceremony space, it's a venue where only a field of grass stood before. It's a tent, and here we look at some outstanding examples of the art.

Lansdale, Pa.-based EventQuip had only a 24-hour window to install a 17,000-square-foot heated structure with a leveled carpeted floor, all on bustling Fifth Street. An additional 7,000 square feet of tenting, installed at the same time, provided catering, restroom and AV support. Since staking was prohibited on the site, all tenting was secured with 160,000 pounds of concrete anchors. A team of 53 workers, 15 trucks and 395,000 pounds of equipment pulled off the job.

Even though city ran late in closing the street at the agreed-upon time for install to start, the event team improvised, using five trucks parked side by side to block off the site. “The officers who arrived a half hour later to ‘officially’ close the site were impressed with the creative solution,” says EventQuip founder Edwin Knight.

THE TENT TAKES THE FIELD

For a high-society wedding this spring, the stakes were already high. The bride's sister had married a few years ago in a big event, so the team at Dallas-based Ducky-Bob's knew the reception tent had to be spectacular. But the tent would be on installed on hallowed ground — at least to many Texans — sited on the football practice field at the bride's college campus.

Sandwiched between football training and graduation ceremonies, the team had 11 days for install and six for teardown of the tenting, which included a 100-by-180-foot ballroom tent and two lounges (66 by 82 feet and 40 by 40 feet), all with flooring, wall-to-wall carpet with contrasting border, air conditioning, lighting and a raised area for the wedding party seating.

To pull it off, installers worked double shifts, all day and night. “This was planned as a way to deal with the restrictions before the job began, rather than as a reaction to a scary realization that time was running out,” explains Ducky-Bob's director of marketing, Jay Cooper. And it worked: “Just before event photos on the day of the event, the clear tent was unwrapped from its protective covering. Indeed, it was like new.”

The groom's hillside family home was beautiful wedding setting — but installing a tent there?

The team at Mount Vernon, N.Y.-based Starr Tent took on the challenge. Using a crew of 12 working for two weeks, the team installed a 7,000-square-foot dinner tent, a 5,000-square-foot tent for cocktails and the after-party, and a 2,400-square-foot ceremony tent, all connected with 500 feet of covered walkways. The client elected to install the walkway in case it rained — which it did, explains vice president Christopher B. Starr.

Due to the 13-foot slope of the site, the dinner tent could not be brought up via forklift — instead, it had to be pushed up manually, Starr says. “This is hard work,” he explains. “All in all, standard operating procedure.”

THE TENT IS THE DECOR

While clear tops and walls make tents seem to disappear, some tents are designed to be eye-catchers all on their own.

For a pre-Emmy Award luncheon at a private home in Beverly Hills in September, Los Angeles-based Raj Tents enveloped guests in a majestic blue tent ensconced on the lawn. “Blue isn't used enough in my opinion,” says Raj co-founder and CEO Dominic Mitchell, who praises the “coolness of the space” his tent creates.

The 1,200-square-foot “Maharaja” structure installs within six hours, which includes suspending lanterns and adding pin-spots. The tent can be walled “but usually is open for summer entertaining as it is ultra-romantic and frames views so well,” Mitchell adds.

The install — on the plaza of the Pacific Design Center in West Hollywood, Calif. — started eight days out when base plates were set into the ground, followed by the installation of the deck and then the raising of the frame. “This event has been a work in progress over the past seven to eight years, though each year has an entirely different design concept,” Borchert says. “We can't give away our trade secrets, but suffice it to say that Town & Country crews will be dreaming of tangerine marmalade for months to come.”

Led by vice president Alex Kouzmanoff, the Aztec team conducted extensive research on the shape of the ring, the type of laces, materials and original production methods to ensure authenticity. The resulting two tents — one 110 by 160 by 10 feet, the other 100 by 140 by 10 feet — were made of 100 percent cotton panels sewn together, not welded. The center poles were crafted from a single piece of wood that was 48 feet tall and 12 inches in diameter and weighed a whopping 2,200 pounds. The special fabric needed to be aged, flame-retarded and weatherproofed after it was installed. For even more authenticity, Aztec personalized one of the tents with a valance from an actual circa 1930s tent.

One thing that hasn't changed from yesteryear: a tight turnaround. “We had six weeks to complete this very ambitious project,” Kouzmanoff says.