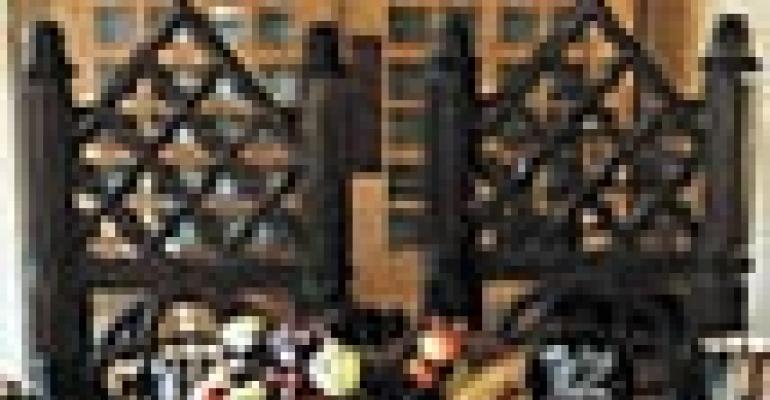 A MEDIEVAL FAIRY FOREST in modern-day Topanga Canyon, Calif.? An autumnal atmosphere on an 85-degree-Fahrenheit day? A mix of Gothic, Celtic and pop-culture motifs blended smoothly into an elegant wedding ceremony and reception? Succeeding with such an eclectic event may seem an improbable feat. But designer Laura Holycross of Los Angeles-based Event Design Studio says the perfect venue — plus a good faux-ear pro — helped make the profoundly personalized celebration an unforgettable occasion.

For Holycross, a major design priority was adhering to the wedding couple's quirky tastes — horror and fantasy films, medieval legends and TV cult hit “Buffy the Vampire Slayer” among them — while avoiding an appearance of kitsch or clutter. At the same time, the designer had to source a site that would fulfill the couple's requests for a forest landscape, a great room with a fireplace, and the freedom to fire up candles indoors.

While she admits, “Trying to find a location in Southern California that will let you do all that is a bit of a challenge,” she says that 10 months of lead time gave her some flexibility. Using $10,000 of the 50-guest event's $75,000 total budget, Holycross nabbed The Mermaid, a historic Topanga Canyon building that gangster Mickey Cohen ran as a clandestine casino in the 1940s. So well suited was the site to the event, she says, that she was willing to work around a set of tight restrictions, including a 10 a.m. to 10 p.m. time frame from load-in to strike.

To contend with the venue's more challenging aspects, Holycross made sure vendors were working in harmony. Tactics included group walk-throughs — one in the early stages of design, and another a week before the event. “We all do it together,” Holycross says. “I don't do the caterer and the floral designer separately.”

After a short ceremony where guests encircled the couple while a Friar-Tuck-costumed officiant led vows and a traditional Celtic hand-binding, celebrants enjoyed cocktails, tarot-card readings and a Celtic trio on the venue's terrace. With daytime temperatures in the mid '80s, “It wasn't very autumn-like,” Holycross concedes. “But it looked autumn-like. We had pumpkins everywhere.”

A move to the site's main hall at sunset didn't just keep the event on schedule, it also eliminated the need to contract an outdoor lighting vendor, as the venue lacks exterior lights of its own, Holycross explains.

Holycross says after-dinner games came out of the couple's desire for medieval-era diversions. “Obviously, I couldn't do jousting,” she jests. Instead, guests had their choice of several lower-risk entertainments including an updated “pass the parcel” game where players were challenged to guess the origins of some of the couple's favorite movie lines and song lyrics. “It was a huge, huge hit,” Holycross notes.

Finally, the couple made their getaway in what else but “a vintage black Cadillac hearse with leopard-print interior,” the designer says.

LOVE IT AND LEAF IT

Key to pulling off the complex event was a willingness to work around obstacles for the sake of the ideal event environment, Holycross says.

Among special measures, she arranged to have a car drive disabled guests from the hilltop main structure down a steep slope to the outdoor ceremony and back up for the reception, while other guests walked. At the close of the evening, she had staff begin a breakneck-speed breakdown at 9:45 p.m., before all guests had left, despite her aversion to interrupting the event experience.

On top of all that, Holycross recounts how she had to have staff lay down a carpet of autumn leaves brought in for the occasion because the canyon, while abundant in foliage, didn't quite meet “medieval forest” standards. The most important thing, says Holycross: “I did find the perfect place for this wedding.”


Turn to page 44 for a list of resources for this event.