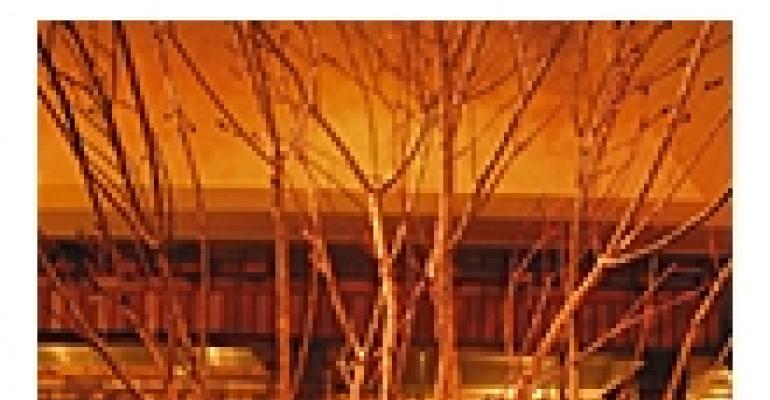 SCREEN THEMES IN THE SPOTLIGHT

One of Hollywood's most in-demand event firms, Los Angeles-based An Original Occasion has made film premiere design an art in itself. The key to getting the creative concept for each premiere client right, says designer Cindy Wiedenheft, is deciding just how far to take the movie theme.

For the March premiere party for the critically lauded “The Upside of Anger,” for instance, a low-key, largely abstract theme scheme was the ticket, as the film's tense family drama didn't lend itself to extravagant decor flourishes. Plus, notes Wiedenheft, with the independent film's modest event budget, money was tight.

Instead of filling the Napa Valley Grill — the modest West L.A. restaurant that served as the event venue — with film props and flashy signage, An Original Occasion strove to evoke “the feeling of the movie, its flavor — but not in an in-your-face way,” Wiedenheft says.

Their design played on the “he and she” dynamic of the movie's central romantic conflict, as well as the story's autumnal country setting. Thematic elements were concentrated in the area of tabletop, with guest tables and buffets dressed in earthy, masculine beige, chocolate and gold color linen, topped with arrangements of more feminine country-style floral accented with grasses and autumn leaves.

For the irreverent existential comedy “I Heart Huckabees,” on the other hand, the company's premiere party design fell in sync with the film's bright visuals and bold surrealism, Wiedenheft explains. It helped to have L.A.'s FAO Schwarz toy store building as an event venue, the designer says, noting that the site automatically conjured a sense of the film's titular department store. Other thematic components included greeters costumed as film character “the Huckabees girl,” chalkboards reminiscent of the one in the office of the film's existential detective couple, and a photo station where guests could pose for pix in a vignette made to look like a threatened ecological site central to the film's plot.

Whatever theme design they end up with — whether understated or over the top — Wiedenheft, partner David Merrell and crew start each premiere's planning phase the same way. “We look at the trailer to get the gist of what the studio thinks the movie is all about — they're the ones hiring us, after all,” Wiedenheft says. Each film's official Web site, too — with its unique color scheme, background graphics and typefaces — is a great resource for finding out “what element of the movie the studio is highlighting,” she adds. Sometimes, she says, her staff will go a few steps further, watching the entire film in order to pick up thematic cues, or interviewing viewers on the details they notice. But with the average premiere-planning lead time a mere 10 days, according to the designer, “Usually, we don't have that luxury.”

While her clients tend more toward the social than studio scene, Los Angeles-based planner Paula Gild of Gilded Events still finds films and television shows among her most popular themes.

In no event area is this trend more prominent, she says, than in bar and bat mitzvahs. That's not just because kids spend so much time with their eyes glued to screens large and small, she notes, but because movies and TV shows — with their fantasy elements and famous stars — can be perfect thematic vehicles for putting young guests of honor in the spotlight.

She recounts a high-budget bar mitzvah she designed this year for a precocious James Bond fan. Held at the elegant Ritz-Carlton in Marina del Rey, Calif., the “Man with the Golden Challah” themed event incorporated multiple monitors showing a mini-movie starring the bar mitzvah boy in a series of Bond-like exploits. Also on display were costumed Bond girls, a martini-themed carved ice bar and three Bond-worthy sports cars — a Ferrari F50, a vintage Jaguar and a BMW Z3. “We had to remove the ballroom doors to bring them in!” Gild recalls.

A stylish bat mitzvah client, meanwhile, got the star treatment recently with a “Shelby and the City” theme centered on her. For that event, tables were named for various notable sites in New York and Los Angeles, while a video montage featured the bat mitzvah girl typing and talking about her life, à la Sarah Jessica Parker's “Sex and the City” writer character. But “instead of talking about relationships,” Gild notes, “she talked about what it means to have a bat mitzvah.”

While screen themes offer many opportunities for creating engaging bar and bat mitzvah environments, Gild says that such themes are not without challenges. “A lot of things you might see, the [shows and films] that are really popular, are not totally kid-oriented,” the designer acknowledges. The important thing, she says, is that the savvy planner knows when to downplay and where to adapt. With adventure-movie themes such as James Bond, she says, “I would always de-emphasize the violence. And guns are usually not good for any kid's party.” As for a “Sex and the City” theme, Gild says she takes the stress off the sex and focuses more on the city, bringing in elements such as chic, urban motifs, city skyline images, and bright martini-glass drinks with colored sugar rims. And always, always, she says, “take the elements of the theme and incorporate them into the [guest of honor's] own life, so that they apply to who he or she is as a person.”

In the corporate arena, no screen-based themes are a better bet for livening up the proceedings than prime time's ubiquitous reality shows. That's the word from Los Angeles-based EventWorks president Janet Elkins, who has used elements of reality-show themes to impart information, dole out incentive prizes and simply energize corporate event crowds.

For a general session at a corporation's dealer convention in musically inclined Nashville, Tenn., Event-Works created a client-customized show based on the TV hit “American Idol,” where the song stylings of attendee “contestants” were judged by a “panel” of company VIPs. Although the contestants had been pre-selected and allowed to rehearse their songs, they appeared to audience members to have been chosen randomly, adding suspense and anticipation to the event, Elkins says. On top of that, thematic decor and production elements including a stage backdrop branded with the client's name incorporated into the “American Idol” logo, and large projection screens flanking the stage “gave the room a Hollywood-studio-type feel,” she adds. An “American Idol”-style panel table, moving stage lights and an audience response-measuring system further fostered the hit TV-show feel.

Prime time's hit “The Apprentice” is another reality-show theme that Elkins says “just screams” for corporate events. And while she hasn't yet brought the theme to an event, she says she can imagine evoking an Apprentice-like “boardroom,” and using a Donald Trump look-alike character to hand out cash or shopping vouchers to incentive winners.

The bottom line is that “tying in a TV show is an easy way to get people interested in the event,” Elkins says. “It's fun. It's exciting. Before it was traditional game shows, now it's reality shows.” As for the reality of the trend? She adds, “Whatever is the latest fad in TV shows will probably find a home somewhere in the world of special events.”

“We have many scenic sets that are based directly on the art direction of ‘Blade Runner,’ including neon necklaces and bracelets, neon umbrellas and neon belt buckles that give the idea of a world where people and neon are merged into one.”
— Matt Dilling, Lite Brite Neon Studio, New York

“How about our very own custom ‘Blues Brothers’ theme inspired by the popular movie? There's a main entrance with highway warning signs that have blues-related slogans, as well as two simulated ‘Detour’ signs that have [names of Blues Brothers characters] ‘Elwood’ and ‘Joliet Jake’ on them. We can include park benches and a street lamp with Chicago street signs suspended from it, posters that relate to the original movie, and our fabulous black and white proscenium backdrop for the band.”
— Nicole Steeves, Unique Events, Vancouver, British Columbia