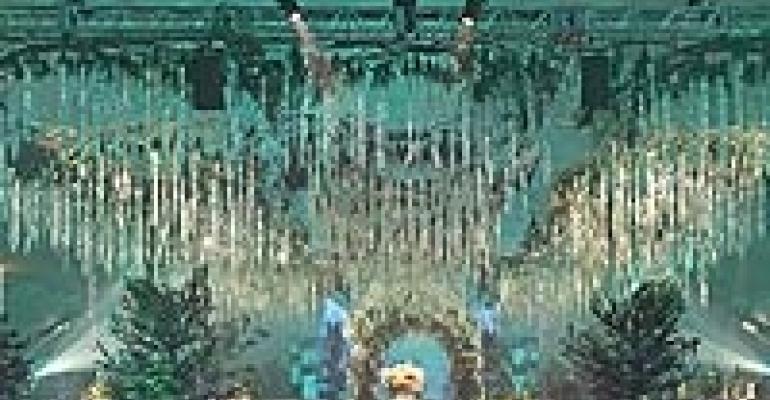 Today's best theme decor engages guests' senses &#8212; all of them.

Big theme events are back in a big way. With clients returning, albeit slowly, to financially flusher times, event designers are getting the go-ahead to dream up innovative and intriguing themes. And they are taking the initiative to transform them into complete event environments. Doing this requires carrying the theme through every element, from food to entertainment — and yes, most of all, dazzling decor.

Miami-based DMC and event production firm DECO Productions has seen a big jump in color-based themes, which offer ample versatility and appeal to diverse guest groups. A black-and-white-theme fundraiser DECO staged at the InterContinental Hotel Miami is a perfect example. For the bicolor bash — inspired by Truman Capote's 1966 Black and White Ball at New York's Plaza Hotel — DECO president Sharon Siegel and team brought in geometric patterns from floor to ceiling — and them some. “We designed and built out a white bar, manned with entertainers dressed in black-and-white checks, showing that we took the theme through to the smallest details,” she notes. Black-and-white-swirl table linens and two big black-and-white murals — DECO employs in-house graphic designers who draw, animate and either project or print thematic “wall decor” — “spoke to the need for movement, which abstract geometric patterns naturally create,” she adds. “One might think a meld of various black-and-white patterns would ‘fight’ each other. But in fact, what they do is create a synergy and an energy that keeps the theme fluid.”

“Today's themes are less about props and more about creating environments that will transport guests into any location around the world with the use of color, fabrics, textures, lighting and aromas,” Siegel says. Along with that, she sees corporate clients asking for branding-based themes and environments where logos and company color schemes dominate, along with interactive seating areas. “Communication and networking environments are the goal of today's company,” she notes. “There is a message that needs to be communicated, and it needs to be done so in a fun and smart way.”

Both a Hamptons' summer-crowd favorite and expert in New York corporate events, Elegant Affairs prides itself on events that engage all senses, starting with taste. For one recent corporate event held on a private penthouse rooftop, Elegant Affairs owner Andrea Correale and her staff created a “green” theme — “not in an ‘eco’ way but in an ‘eat healthy’ kind of way, to celebrate ‘National Eat Healthy Week,’” she explains. Decor didn't just echo the fruits and vegetables found in a market stand — it was made from them. “We built a 10-foot wall out of fresh rainbow chard that authentically remained in flats to serve as the backdrop to our ‘live’ salad bar,” Correale notes. “This could have been the healthiest salad bar of all time; the chef would simply cut, chop and mix. All the dressings were natural, using vegetable puree as a base.” Staying true to theme, people posed as vegetable-market vendors, sitting with baskets of fresh herbs and greens in front of them. “The impeccable execution really created an atmosphere that truly brought the event to life,” she says.

“The days of kitschy decor are over,” Correale stresses. For today's theme events, “It's all about using scent, sight and sound to create an authentic atmosphere that makes the experience real.”

Founded by former Warner Bros. Pictures event producer Chad Hudson, Los Angeles-based Chad Hudson Events is a go-to firm for high-impact entertainment industry bashes. And none makes more of thematic design than Hollywood film premieres. For the “Twilight Saga: Breaking Dawn” premiere for Summit Entertainment, Hudson and team immersed 3,500 guests in the film's hotly anticipated wedding of vampire Edward and mortal Bella. On the tented event deck at L.A. LIVE, “We re-created an exact replica of the film's wedding scene, all the way down to the hanging florals, benches made of cut trees, and a copy of the wedding cake,” Hudson notes. “We even duplicated the sunlight shining through the trees by using tree-branch gobo patterns on the moss- and vine-covered floor.” Further, “We also duplicated the honeymoon by building an actual beach complete with sand and water inside the tent,” Hudson says. “We used a pool liner to create the ocean, and projected waves and a distant moon on the tent wall to give the appearance of depth.”

Noting that themes in general are much more prevalent than when he first launched his company back in the depths of the recession, Hudson says he strives to deliver, no matter what the budget. “For us, duplicating the look perfectly is key, if you're going that route,” he says. “For smaller budgets we do a ‘nod’ to the theme in smaller ways, like through lighting and vignettes.”

See the full story in the May-June issue of Special Events, available to subscribers only.