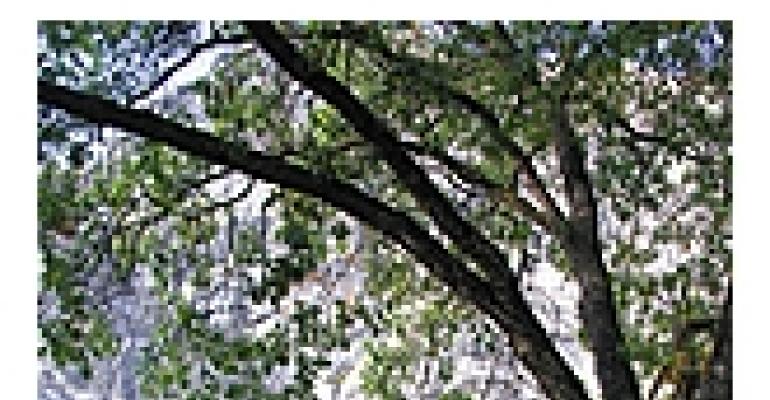 WEDDINGS, corporate meetings and incentive programs flourish in the far corners of the world, resulting in attendees experiencing not just a special event but also a special location. Between the event itself and a resort brimming with activities, event-goers remain active, when they're not distracted by the spectacular backdrops.

According to Kenny Karst, public relations manager of DNC Parks & Resorts at Yosemite National Park, Calif., “The appeal of the Ahwahnee Hotel as a destination resort is simple: its location in the heart of Yosemite Valley in the most celebrated national park in the country.” Built in 1927, the resort blends into its surroundings of pines, waterfalls and 3,000-foot granite domes. A spectacle itself, it provides an excellent backdrop to a spectacular event.

In fact, some famed events take place regularly at the Ahwahnee, such as Vintners' Holidays — featuring wine-makers and seminars — Chefs' Holidays, where famous restaurant chefs give demonstrations, and the Bracebridge Dinner series with its operatic Elizabethan-era performances, now in its 79th year. The most popular event space at the Ahwahnee is the Solarium, a public space with floor-to-ceiling windows where “guests can gaze up at Glacier Point 3,000 feet above their tables,” according to Karst. He also claims many Fortune 500 companies hold their annual retreats at the resort, and he describes one request when “a client staying at the Ahwahnee bused the entire group of 40 up to Tenaya Lake in Yosemite's high country for a picnic luncheon on its sandy shores, complete with silk tablecloths, candles, Champagne and caviar.”

Sitting on 500 acres of pueblo land, Hyatt Regency Tamaya Resort & Spa in Santa Ana Pueblo, N.M., mirrors the layout of the village that was located there more than 1,000 years ago, with bedrooms where the sleeping quarters were, a lobby where activities were held, and 23,000 square feet of meeting space in the area where Native Americans did business.

Now a bustling resort, Tamaya regularly hosts five to 10 groups a week, from weddings to corporate meetings. Weddings are most often held in the great outdoors, with management “locking down the surrounding walking trails, so there is no outside human presence other than the wedding party,” according to Troy Wood, director of catering and convention services. Popular venues include the Cottonwoods Gazebo and Pavilion with views of the Sandia Mountains, Rio Grande Bosque Forest and Rio Grande River; the Oxbow pool area flanked by mountains with the Tuyuna Mesa in the foreground; and the dramatic multitiered Sunrise Amphitheatre.

These outdoor locales are further complemented by the food. Here, the chefs look locally for inspiration. As director of sales Nina Santellanes says, “New Mexico is all about the chiles,” so the ingredient is often added to dishes but “just enough where you can still eat the food.” Dishes that incorporate chiles include everything from a green chile cheese roll to a dual entree of “firecracker chicken” alongside oven-braised halibut. In fact, there's even a flourless chocolate bombe that includes chiles, which, Santellanes says, “gives it that nice little kick.”

IN A LAND FAR, FAR AWAY

Gansbaai, South Africa-based Grootbos Private Nature Reserve overlooks Walker Bay and provides guests a unique opportunity to view flora, fauna and marine life. Its lodges are a two-hour drive from Cape Town, accessed by tar road or helicopter, and it's the destination of choice for people planning weddings, incentives, birthday parties and product launches. Popular event spots at Grootbos include the wine cellar, main lodges and the pool area. For a taste of local events, marketing and reservations manager Florentina Heger says nothing beats a “South African braai at our boma nestled in the Milkwood Forest” — or, in other words, a South African barbecue in an open outdoor event space. Picnics in the Milkwood Forest are also popular, with lunch accompanied by violinists, cello players or published authors reading their works. Dinner could consist of a six-course gala event or dishes served in small portions to encourage guests to circulate and mingle as they eat. Weddings here are typically beach affairs with whales in the distance and sushi, Champagne, and salmon- and trout-wrapped mussels served after the ceremony.

The Wickaninnish Inn in Tofino, British Columbia, sits by a temperate rain forest and is “situated on a rocky promontory surrounded by panoramic Pacific Ocean views on three sides,” according to the inn's manager of public and media relations, Jane Ince. In addition, it's one of the few locales where “guests are not hoping for dry, sunny weather,” Ince says, since “storm-watching” is a favorite activity for visitors. Natural vegetation surrounds the building, and structural beams are textured with a hand adz — an ax-like tool — for a rustic look that adds its own unique charm.

Ince claims “the professional level of service offered in this remote, end-of-the-road, resort location” often surprises guests and partygoers. For social events, the Salal Room offers 720 square feet of space along with natural lighting and views of the rain forest and beach. One of the more elaborate events held at the Wickaninnish is the Relais & Chateaux Congress, an annual congregation of hoteliers, who booked the Wick in April 2005 for an exclusive-use visit. The first night included a Champagne gala, which was held in the Beach Building set up with tasting stations throughout three floors of the structure. The next night featured an outdoor beach party and seafood supper with native storytellers; tents and heaters kept guests warm during the chilly evening. The final night's event was a seven-course meal that had to vie for attention with “a winter storm {that} blew in and knocked out the power,” Ince says. But candles and a kitchen run on propane prevented any catastrophes. In fact, Ince adds, “Visitors were impressed with the timing of the storm — it certainly added a thrill to the evening.” In addition, the Wick's staff delivered newsletters doubling as mementos to guests each morning that advised guests on upcoming daily events. “Included in the newsletter was a recap, with pictures, of the events from the previous day,” Ince says.

The Equinox Resort & Spa in Manchester Village, Vt., dates back to 1769 and is unofficially the second oldest hotel in the U.S. Nestled between two mountain ranges, the historic building saw the Revolutionary War fought on its front lawn.

The resort entertains around 350 groups per year, and Courtney Lowe, director of sales and marketing, mentions that the Equinox once hosted an event for “a very famous sports shoe company where they invited professional and college coaches from all over the country to come for 10 days.” The event included 150 people and cost roughly $1 million. He adds, “Can you imagine taking care of 150 people for 10 days?”

The Equinox also hosts receptions that incorporate fly-fishing lessons as well as hawks or falcons brought to events by the British School of Falconry, located on the grounds. Popular event spots include the Colonnade dining facility and the Pond Pavilion, a rustic log cabin that can hold up to 120 for dinner and features a cathedral ceiling and a large stone fireplace. Also available is the nearby Hildene and its grounds, the summer mansion of Robert Todd Lincoln, Abraham Lincoln's son, which can be used as a venue for up to 300 people.

Keith G. Cooper, director of resort sales at the Old Bahama Bay Resort & Yacht Harbour in West End, Grand Bahama Island, notes, “Destination hotels are ideal for special events because of their intimate nature.” His establishment is situated in a 228-acre community and combines “Bahamian charm with the high standards of a top international resort.”

One elaborate function management organized involved a 30-person group that wanted to hold an event on the small cays offshore. To do this, the staff arranged for food, beverages, tables, chairs, linen and music to be delivered by watercraft. According to Cooper, the menu included “native drinks from Bahama Mamas to Kalik beer — the national beer — conch salad, conch fritters, barbecue chicken — the works. This can best be described as ‘Survivor’-on-a-deserted-island-for-the-day type of experience — except that it had all the trimmings of an outdoor retreat experience in the middle of paradise.”

Cibolo Creek Ranch in Marfa, Texas, sits on 32,000 acres of wilderness in the high Chihuahan Desert at 4,400 feet in the Chinati Mountains. Its appeal, according to vice president and general manager Scott McGehee, is a blend of stark beauty and “just incredible history. Our property was built in 1857 and has three medals from the Historical Association of the United States. We are 35 miles from the nearest town.”

Despite the seemingly rustic digs, the ranch has an upscale attitude that even draws the famous. McGehee describes a wedding for a party of 280 people, and while he won't mention names, he'll say, “It was a Hollywood-type thing. Basically it was done very Western — in-the-ground barbecue where you dig a big pit and make your coal in the pit and make the barbecue over that.” For their outdoor parties, “We do crystal, china and sterling, white tablecloths and torches all around the grounds,” he explains. In fact, most of Cibolo's events are held outside — the space that is most requested is an area that includes an adobe fort, a pool and a small lake. McGehee says sometimes management brings in white tents, but other times, events are held “just under the west Texas skies.”