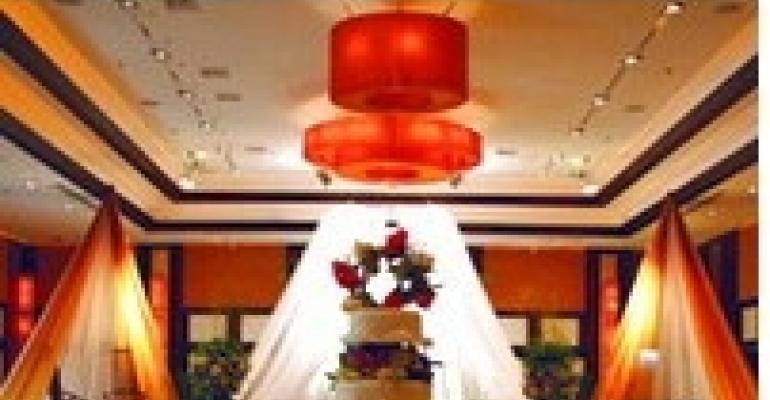 Creating the perfect event space is no easy task. But these hotels gave it a go when renovating — and, in some cases, creating from scratch — event spaces for fabulous fêtes.

BACKGROUND: The property, which opened in January 2002, offers views of the city and the Chao Phraya River.

PROBLEM: Complete lack of a ballroom.

RESULTING RENOVATION: The hotel converted about 4,445 square feet of office space into the warm-toned Banyan Ballroom, unveiled in August. The goal was to provide a sophisticated, stylish event venue, rather than an expansive, high-volume room. “One major difference in the design of the ballroom compared with other hotel ballrooms in Bangkok is that this event space looks out to the city streets as well as allows for the warm glow of naturally transitioning daylight to enter,” says Bernold O. Schroeder, general manager and senior vice president and managing director of hotel operations. “This in turn adds to the warmth and inviting atmosphere of the ballroom.”

ETC.: The Banyan Tree has another event venue option in the Apsara I, “a traditional-style rice barge that plies the majestic Chao Phraya,” according to Schroeder.

BACKGROUND: The original Bedford Springs Hotel opened as a 24-room inn in 1804, famed for its eight nearby natural springs and for offering one of the first golf courses in America. The hotel eventually developed into a full-fledged resort — and even hosted 10 U.S. presidents — then declined in 1983 due to flood damage and closed in 1985. The property reopened in July, and $120 million in renovations makes the National Historic Landmark what it is today.

ETC.: Traditions have been restored as well. In the past — and hopefully well into the future — brides have etched their names with their diamond rings on the heavy leaded glass windows of the Colonnade Ballroom. Legend has it, the first bride did this to test the genuineness of her diamond.

BACKGROUND: Built in 1979, the Hilton Anatole has a whopping 333,400 square feet of event and meeting space, not to mention a priceless art collection.

PROBLEM: One amphitheater-style room and another with sunken seating limited event options. A third ballroom decorated in soft green and beige was just plain outdated.

RESULTING RENOVATION: In May, the Stemmons Auditorium became the Stemmons Ballroom — a 8,312-square-foot oval ballroom that can be broken down into four smaller spaces. The Hilton opted for an elegant look of white tones against dark cherry hardwood, while the Atrium Room's sunken seating was leveled to serve as a flexible pre-function area of 9,840 single-level, functional feet. The dated 28,400-square-foot Chantilly Ballroom received a facelift in rich deep reds and golds offset by crisp off-white trim. And the popular 4,620-square-foot Wedgwood Ballroom — so named for a display that includes the largest piece of Wedgwood china ever made — received a Wedgwood-inspired treatment of “elegant double doors opening to a lovely confection of blues and creams,” according to Tyler McDonald, director of sales and marketing. All told, the renovation cost $40 million and will be complete in December.

ETC.: The glassed entryway to the Wedgwood Ballroom is ideal for grand entrances.

BACKGROUND: French Lick Springs Hotel was built alongside the “healing” Pluto Spring in 1832 — though the water's “reputation as a powerful laxative is its biggest claim to fame,” says director of sales Richard Pauley. The hotel, especially popular in the '20s, touts a colorful past of gambling raids and famous visitors — such as gangster Al Capone, the Marx Brothers and U.S. President Franklin D. Roosevelt — before the hot spot's popularity faded. The $382 million-plus historical restoration includes three properties and returns French Lick Springs Hotel and nearby West Baden Springs Hotel — the latter has not functioned as a hotel since the Great Depression — to their former glory. A new 42,000-square-foot casino rounds out the resort.

PROBLEM: French Lick Springs Hotel's large L-shaped ballroom — the Hoosier Room — hindered guest flow and had terrible acoustics to boot. The West Baden Springs Hotel operated as a seminary for many years after being sold for a dollar — its elegance languished.

RESULTING RENOVATION: The French Lick Hotel closed for a year to undergo renovations, which included building an addition to house the new meeting and event space, revealed in June. The former Hoosier Room was reverted to an indoor pool area, and the new 109,000-square-foot Event Center continues the beaux-arts style of the rest of the hotel with antique furniture reproductions in groups to encourage mingling.

The West Baden Springs Hotel has a stunner of an event option in its 35,000-square-foot domed atrium. The decor reflects the improvements made to the hotel in 1917; the careful restoration includes Italian mosaic tile flooring, huge columns with hand-painted murals running down the sides, and an original 1917 rookwood fireplace.

ETC.: The Historic Landmark Foundation fêted the grand reopening of the West Baden Springs Hotel with the “Eighth Wonder” gala in the hotel's atrium.

BACKGROUND: The circular Hyatt Fort Lauderdale featured a revolving room called Pier Top built 50 years ago as a restaurant and bar. In January 2006 the Hyatt renovated Pier Top into an exclusive event space. The affiliated Fort Lauderdale Grande Hotel is just across the waterway and surrounded by water on three sides.

RESULTING RENOVATION: The Grande Hotel's 50,000-square-foot ballroom got a Zen treatment of soft colors and plush fabrics more reminiscent of a spa than a typical hotel ballroom. For Pier Top, the Hyatt opted for white, chocolate and aquamarine colors; Italian glass tile mixed with the terrazzo floors; and flowing strings of silver beads surround the columns. The $20 million-plus in renovations also revamped the Crystal Ballroom. Here, understated elegance gives an event planner a blank canvas. “The shaded chandeliers and white sculpted walls offer interest without being the overall statement,” Schaefer says.

ETC.: Renovating the event space was only one step in a much larger process. The Hyatt decided to renovate its menu and culinary approach as well — in fact, ignoring modern-day guests' culinary savvy is “the biggest mistake any company can make,” Schaefer says. Now, instead of pasta and wok stations, the Hyatt has risotto stations and foam bars; goat cheese-stuffed figs take the place of coconut shrimp; and small plates replace trays of food. Along with event space and menus, the Hyatt also upgraded its tech offerings. Schaefer recently worked on a wedding that was broadcast live via an Internet feed for the bride's grandparents, who couldn't travel.

After years of planning events, Mona S. Meretsky, CSEP, decided to help others create spaces for events. As president of Comcor Event and Meeting Production and Comcor Consulting Services in Fort Lauderdale, Fla., she gives renovation-ready hoteliers the skinny on how to fatten up their event business with spaces designed for the event planners who book them.

SPECIAL EVENTS: What is the most common problem you see in hotel event space?

MERETSKY: The use of awful prints and colors in the carpeting and uncomfortable chairs.

SPECIAL EVENTS: Is there anything absolutely essential for hotel event space that wasn't necessary 20 years ago?

MERETSKY: Many productions are set up with rear screen projection, and the ceiling height in many rooms needs to be taller. We also use more power in the rooms for specialty lighting, special effects, sound, etc., than we used to. Certainly the need for computer capability in event space is what stands out the most.

MERETSKY: Why don't hotels, architects and designers in the initial design or redesign phase hire meeting and event professionals to tell them what they could do to make their space user-friendly for meetings and events? Just think — if they took everything into consideration, the property would market itself!