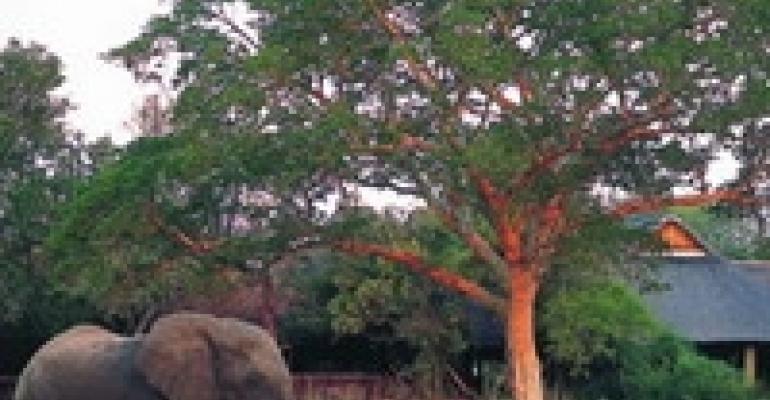 DIFFERENT & DISTINCTIVE: Four lodges compose the Sabi Sabi game reserve, which is home to elephants, rhinos, lions and leopards. Activites unique to the bush of South Africa entertain guests; an evening game drive might end with a banquet laid out in the middle of the bush, complete with local song and dance groups.

EVENT AREAS: Spaces are Bush Lodge, Little Bush Camp, Selati Camp and Earth Lodge. Named after an old railway that crossed the Sabi Sand Reserve, the Selati Camp maintains its old-fashioned charm with oil lamps and ceiling fans; its dinner venue in the bush can accommodate up to 120 guests.

STRIKING SPACE: The Earth Lodge is set deep in the earth, offering a hidden entrance and several event spaces, such as a Zen garden and wine cellar. Amenities include a plunge pool and outdoor showers.

OUT OF THE ORDINARY: Unusual touches available for groups holding incentives or meetings at Sabi Sabi include traditional Shangaan dancing and team-building animal-spotting competitions during game drives.

DIFFERENT & DISTINCTIVE: This elegant train accommodates 188 passengers for journeys from Venice, Italy, to London, Paris and other European destinations.

OUT OF THE ORDINARY: The bar car has a pianist performing for upscale entertainment during the journey.

DIFFERENT & DISTINCTIVE: This resort is set on 500 acres in Puerto Rico, adjacent to El Yunque National Rainforest and the Mameyes River. Guest rooms at the resort include such luxurious features as marble-accented bathrooms, Italian tile and rich wood.

EVENT AREAS: The 48,000-square-foot Oceanfront Conference Center features floor-to-ceiling windows; its lobby doors open to the Ocean Terrace with a view of the lawn and beach beyond.

STRIKING SPACE: Measuring 20,913 square feet, the resort's ballroom is the largest in the Caribbean; it can accommodate 3,302 seated guests.

OUT OF THE ORDINARY: After a $5 million remodeling project, the 7,000-square-foot casino has five 50-inch plasma television screens and new carpeting, chairs and tables.

DIFFERENT & DISTINCTIVE: The Ivy hotel brings a European sensibility to San Diego with hedonistic spaces such as the Ultra Lounge.

EVENT AREAS: Venues at the Ivy include the ballrooms, a wine cellar and the Eden rooftop, which has room for 540 guests.

OUT OF THE ORDINARY: Nightlife venues at the Ivy include exotic entertainment such as a 20-foot boa constrictor wrapped around a girl, dancing girls and “angels” hanging from the ceiling.

DIFFERENT & DISTINCTIVE: The Cairns Convention Centre — available for meetings of up to 3,500 — overlooks the South Pacific Ocean and the Daintree Rainforest.

EVENT AREAS: Venues include the Great Hall, an outdoor plaza and 22 meeting rooms. Overall, more than 46,000 square feet of space is available.

OUT OF THE ORDINARY: The center displays artwork by Australian Aboriginies, who have lived in the region for more than 40,000 years. The culture and wildlife of Australia are often incorporated into meetings at the center.