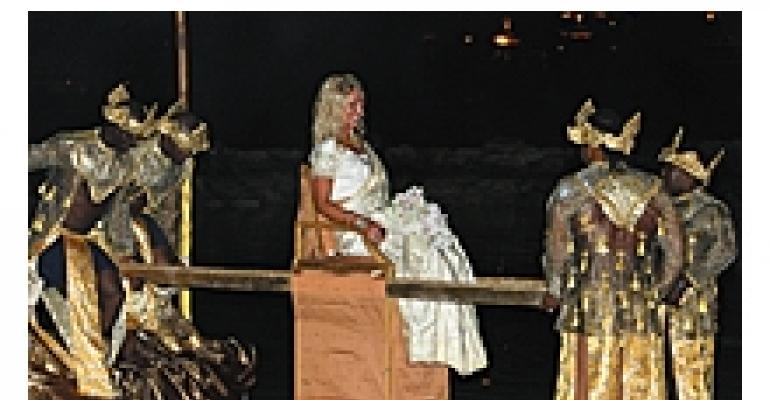 AND THE GROOM WORE A HEADSET?

SINCE the opening of Atlantis in 1995, Pennsylvania-based event expert Harith Wickrema has produced nearly 100 events at the Bahamian resort. So familiar with the property is the president of Willow Grove, Pa.-based Harith Productions that he refers to Atlantis as a “second home.” So it's no surprise he selected the resort as the site of his own November wedding celebration. What might be surprising are the ways Wickrema merged multiple themes — the Caribbean, Atlantis' Greek mythology motif and his own Sri Lankan heritage — into a unified, uniquely enjoyable experience.

During the planning process, Wickrema says, he saw his wedding as not just a celebration of his marriage union but also an opportunity to “showcase what Atlantis and Harith Productions do on a regular basis.” That meant the 94-guest fête had to radiate romance while including high-impact design and entertainment elements more in keeping with a corporate incentive event.

Along the way, Wickrema encountered many challenges. For one, his hope for a butterfly-release at the close of the ceremony — an unabashedly romantic highlight — had to be scrapped. “It is now unlawful to ship butterflies to the Bahamas,” the producer says, “and there are no butterfly vendors that operate there.”

As an alternative, Wickrema opted to take an over-the-top route with a fireworks finale. Fortunately, when it comes to Atlantis, the producer enjoys friends in high places. Wickrema credits key resort executives with taking personal responsibility for the fireworks display and working with the pyrotechnics vendor to ensure that Atlantis' beach could accommodate the production. “They really went to bat for us and surprised me with the end result,” Wickrema says. “And they didn't even want to charge us for it!”

The dramatic entrance he had planned for his bride — via barge on Atlantis' serene lagoon — also brought obstacles. Chief among them was getting the barge to glide over the water without the disruptions an engine or propeller could cause. After input from Atlantis' in-house aquatic experts, Wickrema decided to have two underwater divers guide the barge from beneath. Add to that a surge of mood-setting music and a wash of light atop the water to create a shimmering effect, and “nobody could see how that barge was floating,” he recounts.

Perhaps the most noteworthy of Wickrema's achievements with the elaborate wedding was bringing together varied themes into a cohesive, memorable scheme. He did so by concentrating on elements of what he calls “mythical fantasy” and “exotic atmosphere.”

So, for instance, it was a cadre of costumed “Atlantean warriors” who transported the bride from the beached barge to the ritual Sri Lankan poruwa — a traditional wedding canopy Wickrema describes as “similar to a Jewish chuppah.” And it was an escort of the aforementioned warriors, along with Caribbean drummers and a conch player, who guided guests to the hotel ballroom, where they encountered a space done up in shades of Sri Lankan-inspired gold and orange.

The event's food offered more opportunities for merging motifs. Guests sampled Sri Lankan “short eats” prepared by the Atlantis culinary staff from Wickrema's family recipes. Dinner, meanwhile, featured such uniquely Atlantean items as “Gardens of Atlas” — a salad of Bahamian micro-greens — along with both Caribbean lobster tail and Sri Lankan lamb with saffron and tomato rice. Then there was the wedding cake — a spectacular confection created by a Sri Lankan baker from Wickrema's mother's recipe and flown in for the occasion.

Bringing the entire experience together with a burst of energy was a Caribbean entertainment highlight: “Midway through the reception, a Junkanoo band rushed in dressed in elaborate costumes and playing different instruments,” Wickrema recounts. Provided by Sean DeFreitas of Dania, Fla.'s Designs by Sean — the event's decor mastermind, Wickrema says — the colorful, dynamic band gave guests a jolt and got them onto the dance floor, where they whirled away the remainder of the night.

While overseeing the production of one's own wedding is a daunting task, Wickrema says he welcomed the challenge. And he was able to make it work, he adds, because of the devotion of his staff and vendors. During planning and setup of the complex event, “I was very involved,” the producer says. “I only relinquished my walkie-talkie a half-hour before the ceremony.”

But assuming the role of the professional doesn't mean Wickrema wasn't swept up in the moment. “Did I have a good time? Yes,” he says. “I have a passion for the work I do.” With the enthusiasm of a true-blue event aficionado, he adds, “I had as great a time as I would have at any other client's wedding.”