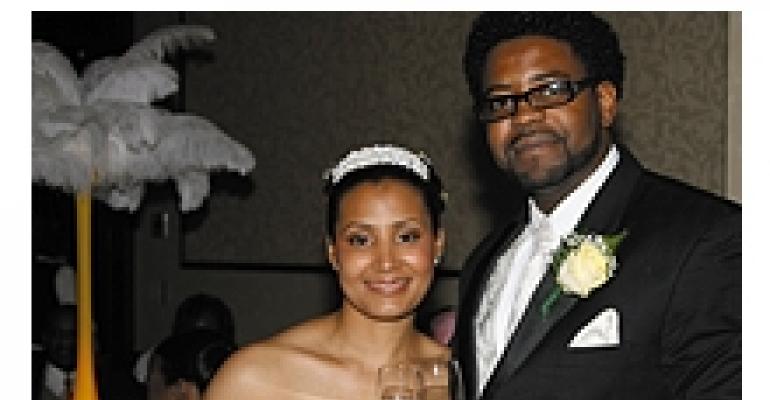 At their June nuptials, bride and groom Luz Delbrey and David Streater celebrated a nine-year relationship as well as Luz's triumph over health problems — including a struggle with Bell's palsy and ovarian cancer — with no-holds-barred festivities. The couple approached Samantha Goldberg of Bridgewater, N.J.-based Gold Events, who decided to plan the wedding for free, drawing from a group of vendors to donate services and products or provide them for a nominal fee. Goldberg says she suggested the “spice of life” theme to “celebrate life, health and the excitement of the day.”

During planning, it became clear to Goldberg that her clients couldn't agree on the look of their 200-guest reception, held at the Woodbridge Hilton in Iselin, N.J. Although she notes, “It is a rarity that the groom ever puts in his two cents when it comes to decor,” David wanted a “sassy, sexy and fun” wedding. On the other hand, Luz's dream called for “simple sophistication in an old-fashioned, '40s kind of way.” Goldberg solved the dispute with finesse — and feathers. Citing the 1942 movie “Casablanca” as an inspiration for the feathery decor, the wedding planner notes that feathers satisfied David's request for sexy elements while lending the room a feel of the '40s, since “feathers were very big back in that era.”

With the help of Steve Hamel, owner of Covington, La.-based Fancy Faces, Goldberg devised towering illuminated centerpieces, complete with fluffy white feathers overflowing from the top, to place on each table. Goldberg explains, “The light coming from the centerpieces was a very warm gold tone, which gave the room a very romantic but sexy feel.” The glimmer from the gold-spandex-wrapped bases echoed the dimmed light of the gold chandeliers for maximum romance.

Each table featured chairs covered in ivory damask cinched with a gold organza sash. To further the fun, each chair was draped with a feather boa as a sassy party favor. When David and Luz first came to Goldberg, the memento they had in mind was a T-shirt that said “Ball and Chain.” Goldberg's response: “I've got to be honest with you, that doesn't sound like a great way to start off a marriage.”

In another playful event element, Goldberg had a red- and white-striped cart filled with vintage candy from the '70s and '80s rolled onto the dance floor. The edible nostalgia included Mike and Ikes, Nerds, Twizzlers and Blow Pops. Each guest received a monogrammed bag for collecting the loot. “People are still talking to Luz about the candy cart,” Goldberg says. The enthusiastic reaction to the treats made an impression on Goldberg as well, “I stood far away; people were running so fast for that cart.”

The highlight of the event for Goldberg was seeing Luz's reaction to the room on the day of the wedding. “She grabbed a boa immediately and danced with her groom!” Goldberg recalls. “And tears of gratitude filled her eyes.”