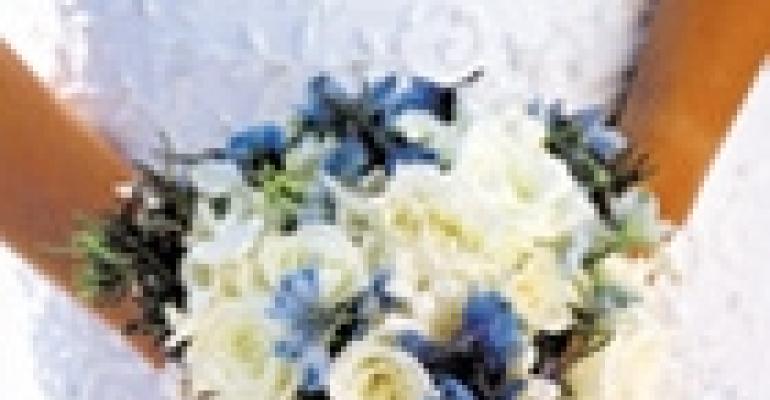 FOUR SEASONS AND A WEDDING

ONCE BLOOMING IN LATE SPRING AND EARLY SUMMER, WEDDINGS HAVE GROWN INTO PERENNIAL AFFAIRS. WHETHER EXCHANGING VOWS ON THE BEACH ON A BALMY SUMMER DAY OR IN A CHURCH WITH A SNOWSTORM OUTSIDE, COUPLES ARE BREAKING FROM TRADITION, TAKING MOTHER NATURE — AND ALL OF HER SEASONS — ALONG FOR THE RIDE.

MARY LITZSINGER, OWNER of Vintage Productions in Simi Valley, Calif., says of the years 2000-01, “It's been the busiest fall and winter I've ever experienced.”

She's not alone. The Association of Bridal Consultants in New Milford, Conn., reports that while May through August are still the peak wedding months, accounting for just over 40 percent of weddings annually, September and October aren't far behind, together averaging almost 20 percent. January is the slowest month, averaging only 4.5 percent. But the remaining five months — November, December, February, March and April — show strong numbers, ranging from 6.5 to nearly 8 percent, accounting for a combined average of 34 percent.

With weddings peppering every month of the year, “The easiest thing to use as a blueprint [for inspiration] is the season,” says Maria McBride-Mellinger, New York-based wedding designer and author of “The Perfect Wedding Reception,” published by New York-based HarperCollins Publishers. “It's already there. You can let yourself be seduced by it.”

“Some of the most romantic moments have been at winter weddings,” McBride-Mellinger says. The darkest time of the year, winter is “a logical time to celebrate light,” she says. James Telfer of London, Ontario-based Grafica Event Decorators agrees, saying, “We use a lot of lit candles buried in the snow.”

Telfer capitalizes on Canada's wintry climate, sending brides and grooms in sleighs from the church to the reception area.

“Winter has a more formal feel to it,” says Laura Holycross, adviser on Lifetime Television's cable show “Operation Style” and owner of Los Angeles-based Distinctive Events. She notes the use of heavier fabrics, such as velvet. Litzsinger agrees, adding that these “rich brocades would seem inappropriate any other time of the year.”

At The Special Event 2001 WOW Weddings for Any Season luncheon in New Orleans, Chuck Barletta, president of Ballyhoo Events in Boston, used gold and silver fabric from Italy and embellished it with rich red colors. “It was very sexy,” he says.

The goal, Telfer says, is to “borrow and take from the season.” Telfer might include cranberries, garlands of lemon leaf, pine and British Columbia cedar in the decor as subtle signs of the season. Holycross notes more traditional holiday tie-ins, including Christmas trees, sprigs of holly as napkin rings and gingerbread men as place cards. McBride-Mellinger suggests serving snowflake cookies as a festive addition to dessert.

For Valentine's Day — another significant holiday in the winter season — “you can use topiaries shaped like hearts for centerpieces or have Cupid show up during the reception,” Holycross says. McBride-Mellinger suggests conversation hearts as favors, a dramatic ruby-red wedding cake with pink frosting or red linens with pink napkins.

Brian Rafanelli, president of Rafanelli Events in Boston, says the majority of New England weddings take place in spring and summer. “In the spring, people want to see color, and they want to have a nice springtime feeling,” he says. “Even in March and April, people are hungry for cheery and bright colors.”

At a tented June wedding Rafanelli did on the beach in Nantucket, Mass., “We wanted to incorporate [the feel of] spring. We used silk douppioni plaid cloth with pink, melon, celadon and turquoise colors,” he says.

Event designer Sally Shy of Memphis, Tenn., notes the use of full-damask cloths on tables and organza-covered chiavari chairs with colored cushions. She says that this spring, “everyone is going with lilac and olive colors combined. And the chartreuse and more unique pastel colors are coming into focus.”

Holycross played up the fun aspects of spring when during a reception she incorporated both a maypole dance and a butterfly release. The reception was “very springlike. There were edible flowers in the salad, herbs and spring-type florals. The centerpieces were miniature birdhouses.”

Susan Bell of Saved by the Bell in New York did a May wedding for which the bride chose The New York Botanical Garden as the site for a tented event. “The tent was turned into a garden fantasy,” Bell says. Bell used topiaries with peonies for centerpieces and placed lilacs and roses around the base of the trees. “The night of the party was very cold and very damp outside, but the minute you walked into this tent, you felt like it was a beautiful, moonlit spring evening.”

In some parts of the country, traffic is as much of a seasonal concern as the weather. “Where in some cities it might be blizzards, in California it's traffic” on Pacific Coast Highway, says Marianne Weiman-Nelson of Special Occasions Inc. in Beverly Hills, Calif. Summer holidays are particularly bad, she notes.

And while summer is a popular time for weddings, especially at the beach, “Don't do a reception on the beach outside unless you're tented,” Holycross advises, as it can get unexpectedly chilly or windy.

“Summer tent weddings are fabulous,” Barletta says. “I love doing inside/outside weddings in the summer. For cocktail parties you can actually put furniture out on the lawn.”

Cuisine in the summer tends to be on the lighter side. “You don't want to eat heavy foods,” Litzsinger says. Barletta suggests shellfish as a summer menu item.

One thing is clear: “Better technology in tenting and heating has extended the seasons,” Barletta says. Robert Hughes, director of special events for Cincinnati-based All Occasions Event Rental, agrees, saying, “You can heat [tents] easier.”

Because autumn rain is always a threat in Greensboro, Ga., De Boer Structures (USA) of Kennesaw, Ga., constructed a 100-by-132-foot clear-span tent to ensure a warm, clean environment for the 450 guests of a wedding at Reynolds Plantation, says Norah de Bekker, account executive. “Our tents can withstand 77 mile-per-hour winds,” de Bekker says. “We've got it down to a science.”

In New England, Rafanelli says, “September is just a special time. Everybody's coming back from summer reinvigorated. People are excited to have a wedding to go to.”

Even in California, where summer transitions almost imperceptibly into autumn, September is regarded as something special. Roberta Karsch, owner of Resource One, an upscale linen company in Reseda, Calif., chose September for her wedding — an intimate affair for 90 at the Ritz-Carlton, Huntington Hotel in Pasadena, Calif.

Karsch worked with Walter Hubert of Pasadena-based Silver Birches to create her fantasy wedding. As guests entered the lobby lounge of the Ritz, “all you saw was taupe and warm lighting and roses everywhere,” she says. She covered the Ritz's overstuffed chairs in white cotton twill, adding pillows covered in silk douppioni with tassels and fringe. She used bronzine table linens with fringe along the base for the buffet. Karsch so enjoyed her experience that she launched a couture wedding line this year, featuring exclusive linens for high-end weddings.

Litzsinger notes an increased use of “rich autumn colors. Five years ago, no one wanted to use browns and oranges. Now we're seeing brides really embrace those rich colors,” incorporating “pomegranates, pears, sugared fruits.” Barletta agrees: “Mixing fruit and floral is still going strong. We did a fall wedding where we used hydrangeas, apples and sickle pears in the decor.”

For autumn menus, McBride-Mellinger suggests “pheasant potpies, roasted root vegetables, butternut squash soups, roasted chestnuts” and potatoes, served fried in baskets or cone “clutches, like fish and chips, but with sweet potato chips, turnip chips.” The menu, she says, is the most logical thing to attach to the season. Barletta adds, “Venison or rack of lamb in the fall is great.”

“It's all about the magical moments,” McBride-Mellinger says. “That's why we look forward to the holidays, because they have all of these elements attached to them. Why not use them and incorporate them?”