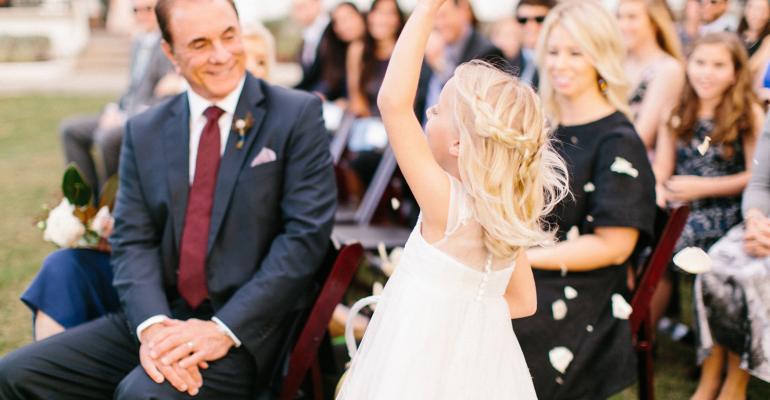 I Do, I Do: The Big Business of Encore Weddings

The focus is on fun and the future, but planners stress the need for sensitivity for second weddings.

There are big weddings and small weddings, religious weddings and secular weddings. One wedding segment that is taking hold for many planners is the encore wedding—where one or both members of the couple have been married before.

“I have done many second and third weddings,” notes prominent Chicago wedding planner Frank Andonoplas, MBC, head of Frank Event Design. “And a few times for the same bride!”

The portion of business made up by encore weddings varies widely from planner to planner, from only 5 percent to as much as 50 percent.

Also varying widely: the styles of encore weddings. “It all depends on the situation,” Andonoplas explains. If both members of the couple have been married before, the event is usually smaller, he says “as they did the ‘big wedding’ the first time. If it’s the bride’s first wedding and the groom is paying—i.e., the trophy wife—it’s usually huge. However, I’ve done a few over-the-top second weddings when both [members of the couple] were encore.”

PLANNER IS VALUED Encore weddings make up about 20 percent of her business, notes London-based planner Siobhan Craven-Robins. “I think that encore couples often opt for a planner,” she says, “as they remember how much work was involved the first time around!” Her encore weddings tend to be larger than first-time weddings, she finds: “Often the couple have more of a disposable income and have acquired a number of friends through their lives, which makes for a bigger guest list.”

Encore weddings also tend to involve older couples, which means “people with a more sophisticated palate,” says JoAnn Gregoli, head of Elegant Occasions by JoAnn Gregoli. Her firm has offices in New York, Los Angeles and Rome. As a result, she sees encore weddings offering “a more fine-dining experience,” followed by an after-party.

“These clients are often not trying to please their parents,” says Tracie Domino, founder of Florida-based Tracie Domino Events, “and are doing what they want and are often paying themselves. They have a greater focus on the guest experience, and are spending more per person on somewhat smaller guest counts.”

Daniela Grafman, CSEP, partner in New York-based Vision Event Co., agrees. At encore weddings, “Often the guest counts are smaller but budgets are the same,” she says, with encore couples “spending more on the venue/food and experiential aspect—for example, entertainment vs. decor. Encore weddings generally treat the wedding as a reunion for family and friends, and really focus on the big picture elements of an event.”

CHILDREN’S BIG ROLE Probably the biggest difference between first and encore weddings is the role of children. For the previously wed, their children can do anything from serve as an attendant, walk their parent down the aisle and offer a toast, to take them for a turn on the dance floor.

Leading planner Joyce Scardina Becker, founder of San Francisco-based Events of Distinction, urges planners to be conscious of the potential impact of an encore wedding on the teenagers and young children of the couple. “I would recommend that all parents involved properly prepare their children for the day, and perhaps seek therapy when necessary,” she says. “On two separate occasions at weddings where I was the wedding planner, I had to console a child--both were young boys--whose mothers were remarrying.”

Indeed, planners stress the need for special sensitivity with encore weddings preceded by a nasty divorce or death of a first spouse.

“I have found it more important in encore weddings to understand the past experiences of the couple to be able to give them a wedding unique to them,” says Gwen Helbush, head of Newark, Calif.-based Where to Start, “honoring the past where appropriate, but focusing primarily on the future.”

Find the full story in the Spring issue of Special Events. Not a subscriber? We can fix that; just click here.