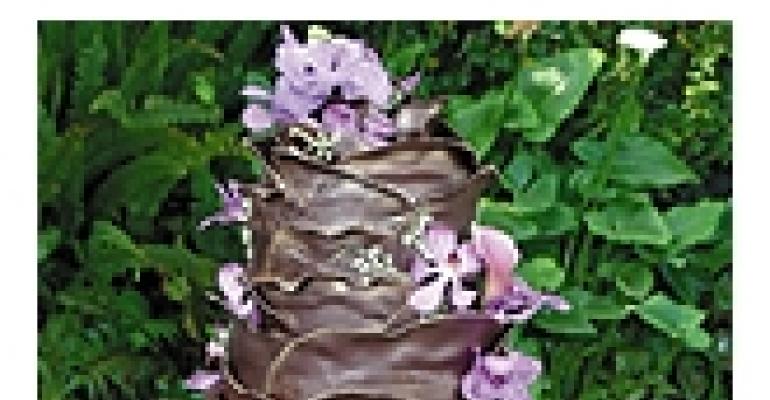 OF the many traditions associated with weddings, cake is one of the sweetest. Still, wedding cake has seen some competition the last few years from its tiny counterpart, the cupcake. Some couples even forgo cakes altogether — both tiered and cupcakes — for a dessert in keeping with their preferences or ethnic background. But cake is hardly going away. Instead, like weddings themselves, cakes are simply getting more personal.

Jane Lockhart says that at Los Angeles-based Sweet Lady Jane, which she owns with husband Donald, “The wedding cake almost always is requested — sometimes less traditional-looking but almost always a cake.” Kevin Pysell — executive pastry chef of the Woodlands Resort and Conference Center in Woodlands, Texas — concurs. “The wedding cake is the popular dessert,” he says. “It's set up as the centerpiece.”

White cake, too, remains a strong preference, with dark chocolate a close second. According to Linda Goldsheft of the Cake Studio in Fountain Valley, Calif., she makes her white cake — often with Bavarian cream and fresh raspberries — “every single weekend.” Other fillings include berries, mousse, ganache and hazelnut cream.

ICING ON THE CAKE

As for topping things off, cake connoisseurs have different preferences. Chef Jeffrey Thompson of Wheatleigh Hotel & Restaurant in Lenox, Mass., says he and his team “love to work with buttercream as we think the most important thing is always flavor and texture.” Pysell too primarily works with buttercream but claims fondant is making a comeback. Still, in certain regions, he says, guests remain leery of its unbelievably smooth surface. “They look at it,” he explains, “and they peel it off with their fingers, and they gently set it to the side of their plate and don't touch it.” He notes often fondant is rolled too thick and “has that plastic appearance.” In addition to proper rolling, he suggests adding a layer of marzipan underneath the fondant for flavor.

Goldsheft says nearly all of her cakes are covered in fondant. She finds fondant provides a practical purpose beyond its smooth appearance: protecting the cake from heat. Goldsheft says while catered meals often are served as soon as the food is cooked, cakes typically sit for four hours — a potential problem at a sunny outdoor wedding. Using fondant, refrigerating the cake before the wedding and bringing it to the venue at the last minute can all help prevent dripping icing.

Cakes start getting truly personal when it comes to how they look. Thompson notes clean lines and square cakes were popular for 2005 and 2006. “Sometimes the simple ones are the ones I like the most,” he says. For example, Thompson and his pastry team once sprayed the logo of the wedding on a cake and accompanying cupcakes. He adds, “I think this was a very neat idea to tie everything together.”

Pysell has done similar work, citing domestic diva Martha Stewart and her cake designs emulating china patterns as the source of the trend. He's currently working on replicating a peacock feather that appears on a couple's wedding-day napkins for their cake.

Lockhart agrees designs are getting more personal, noting a Chinese bride and groom who asked for a gold dragon wrapped around their cake. Her favorite creation to date is a wedding cake she designed that emulated “the three fabrics of the wedding party's dresses: the bride's lace sleeves for the top tier in white, the mother of the bride's dress pattern in a pale yellow for tiers two and four, and the bridesmaids' dresses in a pale lavender for tiers three and five.”

Goldsheft also often looks to dresses for inspiration and cites her favorite creation as the cake she fashioned for The Special Event in Los Angeles this year, which she jokingly calls “The Ice Princess.” “It was inspired by an Armani dress that I saw,” she notes.

She's made other equally elaborate wedding cakes, such as one resembling the Eiffel Tower — the site of the proposal — for her client, actor Blair Underwood. She made the horizontal platforms of cake and the vertical structure from wood and foam core. Goldsheft covered the 6 ½-foot structure in royal icing — made with egg whites and sugar, which dries hard — and then strung lights inside the length of it, at the arches and at the top. While the cake was a success and Goldsheft has since re-created it for other wedding parties, she had her doubts about the feasibility of the request. As she recounts, Underwood and his then-fiancee asked, “‘Can you do it?’ and I said, ‘Sure I can do it.’ And then they walked out the door, and I thought, ‘Oh my God, how am I going to do it?’ But I did.”

And what of the wedding cupcakes that showed up at comedian Adam Sandler's wedding and many others? Goldsheft puts it simply: “The cupcake trend is dying out.” Pysell never saw the trend much in the first place. “The past 10 years, I think I've done maybe three wedding cupcake {desserts},” he says. Despite this, Pysell made cupcakes just recently for a bride who had “a perky personality, and that just seemed to fit.”

The whimsical confection that is starting to take the cupcake's place at weddings is on a slightly larger, though still petite, scale: the miniature individual wedding cake. Thompson made 175 of these for one party, while Lockhart recently turned out 200. Lockhart's cakes were two tiers — roughly a 2-inch cake atop a 4-inch cake — with different colors and designs “decorated just like a wedding cake with all the details that entails.” An additional challenge: “We had to accomplish this within a day and a half as we don't freeze our cakes.”

For some couples, cake just won't do. To cater to her clients, Lockhart has offered an array of pies, which she says suited the couple — fans of her pies — and their casual beach wedding. Pysell too has offered an assortment of pies as well as small tarts and finger pastries.

Both Pysell and Goldsheft have constructed a croquembouche, a traditional celebratory French dessert. The classic dessert consists of a pyramid of profiteroles, or cream puffs, stacked into a pyramid and glued in place with caramelized sugar. The dessert is risky for a wedding by the sea “because if it's humid, it kind of falls apart,” Goldsheft notes. To protect the structure, Pysell uses a nougatine base while Goldsheft sometimes dips the profiteroles in chocolate for added flavor. Many chefs also cover the exterior in spun sugar, Goldsheft notes.

Another unusual sweet request Thompson has served, in addition to a wedding cake, is a personalized midnight snack such as ice cream cones — for the bride who wants to have her cake and eat it too.