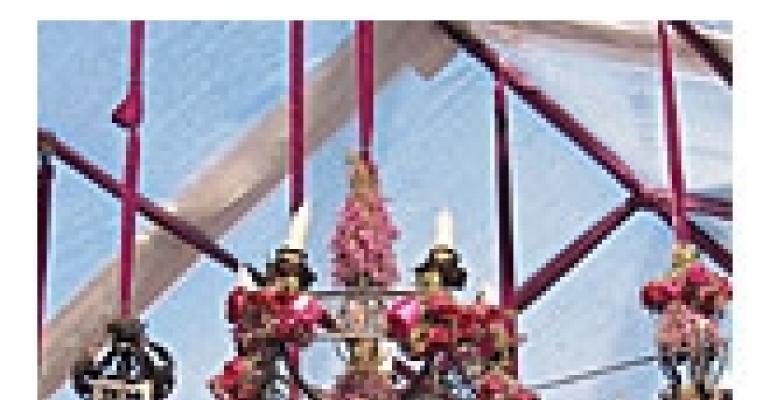 LOVE IN THE TIME OF DOWNPOURS

RAIN, RAIN AND more rain. February, the month that former Los Angeles Laker basketball star Derek Fisher picked to celebrate his marriage to longtime fiancée Candace Patton, fell in the soggy middle of one of L.A.'s wettest seasons on record. Good for the florals, perhaps, but not so good for just about every other installation component of the 175-guest affair, produced by Tarzana, Calif.-based Someone's in the Kitchen on the grounds of Fisher's former L.A.-area home.

Not helping matters was the fact that Fisher's house was unoccupied and on the market at the time of the event. That meant producer Jeff Brown of Someone's in the Kitchen had a totally empty space to fill, while fulfilling the couple's request for a classically sophisticated look, and, as per the bride, lots and lots of red roses.

Starting a mere six weeks out, and working closely with Beverly Hills-based floral designer Michael Walls, who brought Someone's in the Kitchen onto the project after being hired directly by the client, Brown's first move was to assess the vacant premises for what he calls “space and flow.”

“We got into the home with [the wedding couple], and let them know the layers of involvement that would go into that kind of production in that kind of raw space,” he explains. “This wasn't just walk into a room, pick a chair, and we have a wedding. We were looking at expensive rentals and a week-long install.”

Brown's idea was to hold the ceremony in the home's circular driveway, bring cocktails inside the house, and place the dinner reception in a tent set up over the backyard pool. Everything, he says, was going swimmingly until it became clear, a little over a week out, that the weather — a near-constant downpour since the start of the winter season — wasn't going to cooperate.

While plans for the ceremony and dinner areas called for canopies from the start — “We were three-quarters of the way to a rain plan already,” Brown says — the deluge forced plenty of last-minute adjustments.

For starters, the 160-foot palm-lined driveway had to be covered in its entirety, from the valet drive-up to the ceremony space itself. On top of that, sub-flooring had to be added to the ceremony area to ensure solid footing for the well-heeled guests.

Then there was the kitchen plan, which required extensive modifications to contend with the wet stuff. Brown moved major dinner operations, originally intended to take place in an outdoor kitchen tent, into the garage, requiring servers to walk through the house to get to the backyard reception area. “The good news was that it was a much more stable environment,” he says. “The bad news was that it was about as far from the dinner service as you would want to walk” — a problem exacerbated by the fact that service for the planned family-style dinner required “going back and forth from the kitchen a million more times than usual,” he adds.

On top of everything else, the rain played havoc with the house's landscaping. “Because nobody had lived there for a while, guttering, plumbing and drainage challenges kept popping up at me,” Brown recounts. “I remained calm, and became best friends with [drain-cleaning service] Roto-Rooter.” Industrial-strength power vacuums also helped “make the lakes disappear,” he notes.

Looking back at the difficult job, Brown acknowledges, “I think I aged about 10 years in the process.” Nevertheless, he calls the event “my favorite experience of the year so far.”

Why? “We had a lot of freedom in the creative process to come to Derek and Candace with what we thought would make their day special,” Brown says. “Having that always inspires me.”

Among highlights of that creativity he counts a sumptuous wedding cake from Sherman Oaks, Calif.-based Layers that took its aesthetic cues from Reseda, Calif.-based Resource One's beaded and embroidered chair caps, which Brown brought to the cake studio for inspiration. Indispensable, he adds, were Walls' wondrous floral creations, which included a swagged ceremony entranceway graced with two large medallions of multi-hued red roses, pink hydrangeas and burgundy amaranthus. For his part, Walls says he's proudest of the dinner tent's 12 wrought-iron chandeliers, which he studded with smilax garlands and clusters of red and pink roses.

Most important, Brown adds, is that for all its lavish elegance, the event — aided by comfort foods such as sweet potato fries and lobster pot pies, plus post-dinner casino games — still was in synch with the wedding couple's request for fun and relaxation.

As for the rain, well, Brown says, “At the rehearsal run-through, being their sweet selves, Candace and Derek didn't even notice it was wet. They just thought it was beautiful.”