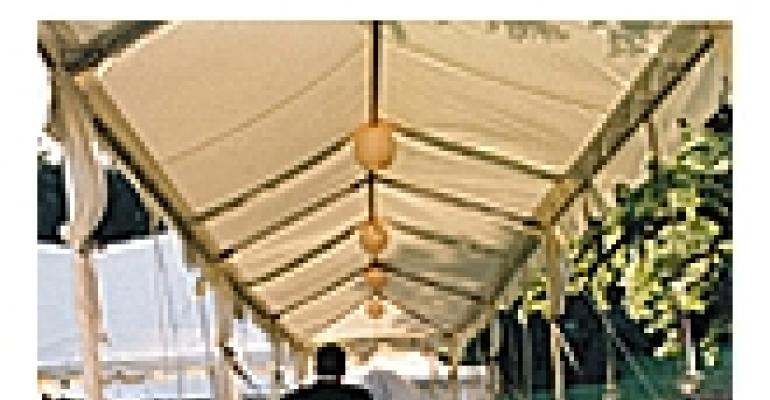 THE PERFECT WEDDING requires the perfect setting. And nothing offers access to a wider range of ideal sites than a tent. Peaked, pole, clear-top or kedered, the right wedding tent can turn a rustic, too-small or otherwise tricky locale into an outstanding event.

When it comes to event space, sometimes even an airplane hangar falls short. Such was the case with Cameron Keating's wedding client — a Florida billionaire whose sentimental attachment to his executive hangar prompted him to insist on the space as the site for his October nuptials.

Keating, of Palm Beach, Fla.'s The Breakers resort, knew that for all its space, the hangar would not quite accommodate the event's expected 250 guests. Premier Party Rentals of Naples, Fla., came up with the solution — a 25-by-15-foot clear-span “extension tent,” which provided the additional space necessary to fit the crowd. To create a unified interior look, Keating lined the interior of both the hangar and the attached tent with hand-pleated fabric.

But just because the reception and dining space had a seamless look doesn't mean the planning team didn't hit snags along the way. For his part, Premier's Nate Albers recalls that a height differential of about 10 feet between the hangar doors and the clear-span meant he had to make up the difference by running fabric from the eaves of hangar to the rafters of the tent. A “very expensive” but utterly crucial custom rain gutter also had to be incorporated, Keating adds. And good thing, too, as “it poured rain that night,” he recounts.

A 275-guest summer wedding for a Walgreen of drugstore-chain-family fame brought Blue Plate Catering, Chicago, out to the clan's Hazelwood compound in Dixon, Ill. There, wedding division manager Michael Meuer found a “lush, gorgeous area with a lot of heavily treed spaces.” He also found a daunting 12-foot drop in grade from the one end of the portion of land where his client couple envisioned their wedding tent to the other end.

Enter nationwide vendor HDO Tents, which provided a white 80-by-120-foot Century tent with rollable walls. The vendor also installed subflooring to compensate for the severe slope, adding a catering tent that backed up onto a cliff edge and rose 12 feet off the ground, according to Meuer.

Set on a family estate in rural Clear Lake, Calif., a wedding created by Kristjan Gavin, now of San Francisco-based Key Events, provided as many obstacles as it did opportunities.

First off, there was the fact that the site of the spring wedding was “out in the middle of nowhere — it would take four hours to get someone to replace something,” Gavin notes.

Then there was the matter of the 22 10- to 12-foot live trees brought into a 50-foot-wide gabled aluminum frame tent from Milpitas, Calif.-based The Stuart Rental Co. While the trees created the “fairy tale forest” environment envisioned by the bride, their sensitivity to sunlight meant the tent had to be tarped during the day. “One day, before the wedding, a windstorm came up and the tarp became a giant sail — we had to cut it down,” Gavin recounts.

Still, on a calm, clear wedding day, surrounded by trees hung with 300 sparkling crystals, guests inside the clear-roofed tent were able to gaze at the star-filled country sky. “The mother of the bride came up and was crying, saying how beautiful everything was,” Gavin recalls.

While the swank country club setting of a Virginia Beach, Va., wedding was hardly raw or rural, the site made for some tricky tent setups, says Boots Daugherty.

The president and owner of Affordable and Luxury Tent, Virginia Beach, notes in particular the 3,100 square feet of marquee tenting his team had to install on a span of land that descended steps down a 14-foot grade and made two sharp turns.

Then there was the 40-by-135-foot Future Trac clear-span dinner tent, which had to accommodate four chandeliers weighing a total of 2,000 pounds, not to mention a variety of sculptures, antique furniture and other props brought in from New York for the high-profile nuptials.

With such a laundry list of demands, including one for 40,000 square feet of hand-pleated lining fabric (“They were real specific on wanting four-inch pleats — the planner had a tape measure”), it's no wonder Affordable and Luxury Tent associate Cathy Pender calls the event “the most elaborate, over-the-edge wedding I've ever seen.”

For a mid-summer wedding for a member of the Caymus winery family in Napa, Calif., Mary Ross of Napa-based Five Star Productions notes that the region's hotel event spaces are simply unable to accommodate the 250 guests. Luckily for her clients, a tent could be set up on the grounds of the family vineyard, and because the land was private property, the setup crew had two full days to prep.

Ross had Accent Party Rentals of Santa Rosa, Calif., bring in a 40-by-60-foot Genesis pole tent, which remained walled until guests made their entry. Once inside, they found a “very romantic” atmosphere dominated by ceiling swags in shades of lavender and iridescent topaz, Ross says. And while the guests generated enough celebratory heat to merit removal of the tent's side walls, Ross notes that the region's unpredictable climate means that anyone planning an outdoor wedding must be ready for anything: “Sometimes you do what you have to do. August and September are the only two months that I would absolutely not worry about a tent.”

For Joyce Scardina Becker of San Francisco-based Events of Distinction, it was not a question of space but of cultures that ultimately demanded the use of a wedding ceremony tent.

For the spring wedding she designed for the marriage of a Jewish-American bride and a Hindu-Indian groom, Becker settled on Fort Mason, a former military base in San Francisco. Its rustic setting provided not just a natural environment reminiscent of both India and Israel, she says, but proximity to Greens vegetarian restaurant — a perfect reception site for the vegetarian couple's post-vows party.

A 1,600-square-foot white canopy A-frame tent provided by Classic Party Rentals, San Francisco, accommodated a combination mandap/chuppah and sheltered an intimate gathering of 97 guests as they watched the couple joined in a Hindu ceremony followed by a Jewish ceremony. The tent provided much-needed privacy in the public space — a major concern, with a youth hostel located on the perimeter of the site. But, more than that, Becker says, “Because we were embracing both the Jewish traditions and the Hindu culture, there was a kind of sacredness to the land that only tenting would achieve.”