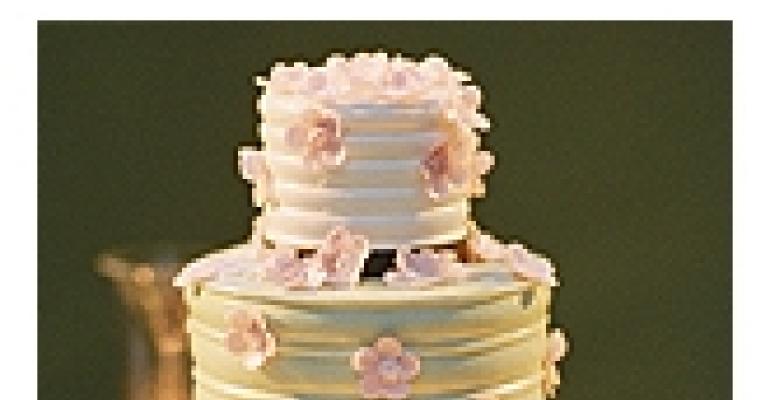 MANY young girls dream of fairy tale weddings complete with big gowns, a bevy of bridesmaids and bouquets tossed over the shoulder. But what happens when a bride's attitude is “Been there, done that”? For the growing population of adults who have divorced and then found love again, “They don't want that 20-something wedding,” says Kendall Brown, owner and president of Media, Pa.-based Eclatante Event Design. In fact, while Brown feels the traditional wedding has its place, she has found a niche producing “subsequent” or “last weddings,” as she calls them. The market remains, perhaps strangely, untapped; Brown notes that many couples wonder if subsequent weddings are appropriate to celebrate. Yet, her research reveals more than 50 percent of the U.S. population is on its “second or third or fourth marriage,” she says. And a growing group of these brides and grooms want to celebrate, albeit in a completely different manner from their first wedding. But as Brown puts it, “Why wouldn't you want to celebrate your last wedding?” Read on to discover how these wedding experts help couples do just that.

Planners agree — second-time brides typically are easier to work with than first-timers. As wedding coordinator and co-owner of Beverly Hills, Calif.-based An Elegant Affair Heidi Caldwell says, “Second-time brides are more organized and prepared, so there is less guesswork.” Wedding and event planner Nancy Swiezy of A Newport Affaire in New York adds that these brides, often busy professionals, don't have time “to waste on fantasy.”

Yet what these brides lack in time, they make up in resources. “They certainly seem to assert their own priorities the second time around,” says Yifat Oren, president of Sherman Oaks, Calif.-based Yifat Oren & Associates, “mostly because they are usually older and, second, because they usually pay for it themselves.” She notes, too, these brides seem to enjoy the process of planning their weddings more as well.

Brown offers one more reason for the ease of working with these brides: “Their mothers aren't involved.”

Second weddings tend to be smaller, the experts say. “Fewer guests, less pomp and more relaxation,” as Caldwell puts it. But that doesn't necessarily make the budget any smaller. Tara Guerard — owner and lead designer of Soiree by Tara Guerard in Charleston, S.C. — puts it bluntly, “They're spending the money!” One wedding she produced — the second for the groom, the first for the bride — had a guest count of only 80. But Guerard notes, “They spent, budget-wise, the same as my bigger weddings.”

And with age comes wisdom. “Money seems to be used more wisely,” Caldwell notes. This can be seen in the choice of venue: “They aren't hotel brides,” as Brown puts it. And a striking venue requires less decor, “which is less money than if you have to create a unique feel in an empty hotel ballroom,” Caldwell explains. Another difference she has noticed in second-time brides: They're more likely to forgo expensive flowers in favor of atmospheric candles.

Heeding tradition is of little concern to the encore bride. Instead, Brown notes, subsequent wedding couples focus on “the traditions that {they} have built throughout their lives, individually and together.”

To that end, “Out is the mandatory sister-in-law bridesmaid,” Caldwell says, “out is the $5,000 gown they'll never see again, out is the 100 extra guests who are friends of their families.” And mature brides show no interest in removing and tossing the garter. As Brown puts it, “Nobody is taking any clothes off.” She adds, “Half don't even carry flowers,” much less toss the bouquet. Instead, the bride may hold a meaningful heirloom.

Another tradition these brides and grooms show little interest in is the cake-cutting ceremony. Instead of doing the “typical big cake-cutting” at one wedding, Guerard and her team had “individual cakes for each person at a seated dinner because it felt a little bit different,” she explains. The favors, too, were nontraditional: a green box hung on the back of a chair with the guest's name written on an attached tag — the box served as a leftover cake to-go box, favor and dinner place card.

Traditions that seem sweet for a 20-something bride are less suited to a mature bride. The first dance between the bride and her father is often not considered an option. And as one woman put it when speaking to Brown, “If you have to be given away at 50, that's a problem.”

Children, too, often play a larger role in second weddings. The most common way to include younger children from a previous marriage is as flower girls or ring bearers; older children are typically the best man or the maid of honor, with no other attendants. “I've seen sons give away their mothers,” Oren says, and Brown recalls seeing one groom “given away” by his two daughters. She adds, “I have a couple who is planning to make promises to the children as part of the vows.”

Caldwell has also seen “children say vows of their own or have a special piece of jewelry — bracelet, ring, necklace — to exchange at the time the bride and groom do.” One potential problem An Elegant Affair was able to head off involved a former husband in attendance with his and his former wife's daughter, who served as the flower girl at the wedding. The new husband was “somewhat unnerved,” Caldwell says, at seeing the former husband during picture-taking of the bridal party. Yet this was easily remedied. “We arranged for someone else to look after the daughter and gave the father an errand to run to have him out of the way while the couple were having their shots done,” she says.

Everyone learns from mistakes, brides included. “A lot of brides want to fix what they felt wasn't right in their first ceremony,” Caldwell notes. Often they want “a better photographer, better venue and definitely a coordinator to make sure everything runs smoothly,” she adds. Guerard cites an example of a beautiful venue that couldn't have been used for a larger wedding but was perfect for an intimate party of 80: the back garden of the Gibbs Art Museum in Charleston.

Often, too, encore brides and grooms skip the traditional church ceremony and reception and instead marry and enjoy their honeymoon, throwing a big party after they return. Swiezy notes a sophisticated bash that took place in a New York loft for a second marriage; the hip venue needed only candles and dance music to create a party atmosphere. Because the honeymoon took place in Italy, the couple opted for antipasto platters at the party to keep with the Italian theme.

THIS TIME IT'S PERSONAL

While all brides like to add personal touches to their weddings, second-time brides take this practice to the hilt. One couple Brown is working with vacations at wineries around the world and wants to infuse their wedding with their shared passion for wine. Their wedding will include long wood tables, Italian ceramics and “bottles of wine from everywhere. The food is going to be served family-style, and there is no head table — people just sit down.” She jokes, “I tried to talk them into stomping grapes for fun, but that was apparently a little over the top.”

One wedding An Elegant Affair produced was the opposite of the bride's first wedding: “The bride {previously} had the traditional large church wedding, complete with the cathedral-length train and 300-plus guests — all conducted by her mother-in-law,” Caldwell says. This time, the bride and groom — both outdoorsy types — opted for a destination beach wedding in Hawaii. “The entire event was flanked by flaming torches, incense, and with the waves not more than 15 feet away,” Caldwell says. “They were married at sunset and said their vows under a full moon.” Afterwards, islanders treated the party to a surprise private fire-dancing performance.

Some couples opt for personalized versions of pre-wedding celebrations. Brown notes, “I have a couple where the bride and groom are not into the whole bridal shower, bachelor party, etc., thing. So instead, they're all learning Israeli folk dances, which will be performed by the guests at the wedding. So fun.”