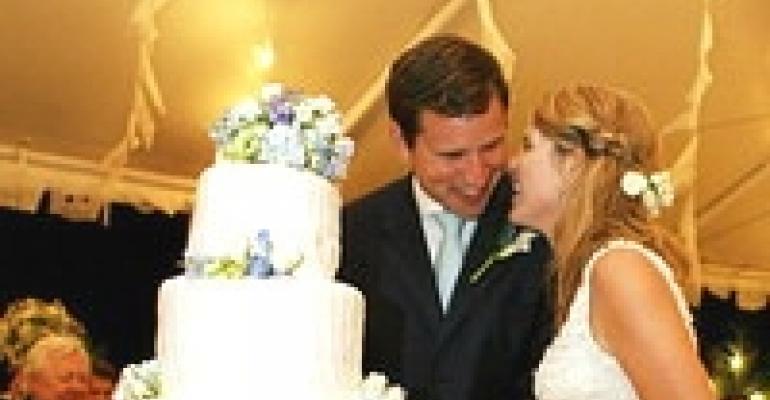 The beauty and culture of Texas Hill Country set the tone for the wedding of U.S. President George W. Bush's daughter Jenna on Saturday at a ceremony and reception held at the Bush family ranch in Crawford, Texas.

First Lady Laura Bush was "intimately involved with the details" of catering at her daughter's wedding from the very start, caterer Jackson Hicks, founder and CEO of Houston-based Jackson and Co., tells Special Events.

The first course was a molded Gulf crab parfait, with layers of lump crab meat, creamy avocado and heirloom tomatoes dressed with basil-infused extra virgin olive oil and garnished with tomato "petals." "We created this version of the dish for the wedding, but always have it in our repertoire," Hicks notes.

The entree was Rio Grande flat iron steak grilled over mesquite and napped with roja sauce--a blend of roasted red peppers, cilantro, parsley, red wine vinegar and arbo chiles. Side dishes included potato and poblano gratinee, sauteed fresh spinach with pine nuts and golden raisins, and Jackson and Co.'s signature monkey bread. The fish option was snapper Vera Cruz; the vegetarian option was chipotle polenta. Having alternatives for non-meat-eaters was important to the First Lady, who is "a thoughtful hostess," Hicks says.

Some 50 staffers from Jackson and Co., including both culinary and wait staff, served the 200-plus guests at the event.

San Antonio's Ultimate Cheesecake Bakery created the wedding cake--a tres leches cake. The dessert featured layers of delicate sponge cake soaked with three different milks ("tres leches" in Spanish). The layers were "torted" and filled with dulce de leche filling and topped with whipped cream icing. "The cake is a moist, delicious combination of rich caramel and cool, refreshing whip cream," Mary Jane Ontiveroz, the company's co-owner, tells Special Events. She and her husband drove the cake from their bakery in San Antonio 195 miles to the Crawford ranch. Upon arrival, presidential aides told the pair that President Bush wanted to meet them. "At that moment, my knees became like Jell-O!" she says. "I had no idea that we would even see any family members, let alone the president!"

The groom's cake--a "very rich" chocolate cake--was prepared by a longtime friend of the family, according to Sally McDonough, the First Lady's spokesperson.

The reception's decor reflected the landscape, McDonough says, such as the blue of the ranch's lake, its green grasses and its masses of wildflowers. Tables were set with alternating arrangements including tall topiaries and white birch "vases" holding green and blue hydrangea, white Bianca roses, white and lavender campanula and blue delphinium.

The dinner tent--a 50-by-90 foot tent with a custom floor to level the terrain--was supplied by the Dallas arm of M&M The Special Events Co.. A 50-by-60-foot frame unit served as the area for dancing and entertainment. "We wrapped all the hardware of the frame with white vinyl to make the metal disappear," M&M's Scott Berk tells Special Events. Continuing the understated theme of the reception, the dinner tent did not have a liner but featured strings of lights and banners "that were meaningful to the family," notes M&M founder Mike Berk.

Although the family initially did not want air conditioning in the tent, the M&M team used weather forecasts and "a little convincing," Mike Berk says, to persuade the family to add cooling units on Friday. "We then closed up the entire tent to keep it as cool as possible during the day," he explains. "Just before the guests entered the dining tent, we removed all the sidewalls on the lake side to unveil a beautiful view. Since the sun had already set, it was very comfortable in the tent."

No bride can escape challenges from Mother Nature; the night before the wedding, a rainstorm hit the area. "There was some minimal damage, including torn sidewalls, filled rain gutters, tossed tables and kitchen equipment, and a saturated carpet," Mike Berk says. After the storm, "Our M&M team quickly pulled together to eliminate any damage. It was as if the storm had never happened."

The tempest-tossed kitchen equipment belonged to Hicks' team: "We had three big commercial convection ovens blown over," he notes. His crew responded by bringing in new ovens on Saturday morning. A more tedious chore: replacing all the salt and pepper shakers that had been soaked. But the problems were solved in time: "We began our party prep very early Friday and were involved all day Friday and Saturday," Hicks notes. "This gives you enough time to double-check all the details and solve challenges that may come up."

The event professionals involved with the wedding acknowledge the extra layers of security for such a significant event made for more complications. "It took a lot of planning and re-planning," Mike Berk says.

Hicks has a long-standing relationship with the Bush family; former President George H.W. Bush and former First Lady Barbara are longtime clients. "We were so honored to be a part of this important family occasion," Hicks says. "We wanted every detail to be remarkable and remembered, and wanted those details to reflect the specific wishes of the First Family."

All photos by Shealah Craighead courtesy the White House