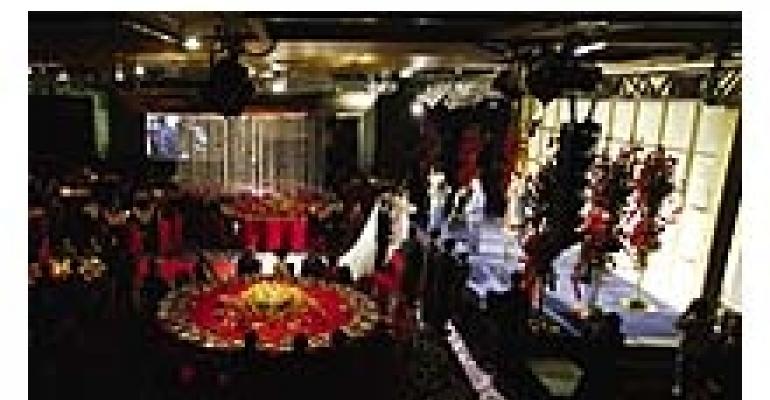 IT WASN'T THE size of the 600-guest wedding that gave pause to The Precious Moment, based in Taipei, Taiwan. After all, the company puts the average size of the nearly 50 weddings it produces annually at close to 500 guests. What posed the biggest test of planning prowess, says company wedding consultant Charlotte Kuo, was the Chinese-born, U.S.-educated client couple's desire for an event that upheld tradition enough to satisfy family, yet proved contemporary enough to impress friends and film-industry colleagues. The additional challenge of an 18-hour hotel ballroom setup for an event that required most of the elaborate decor to be built or assembled on-site only added to the complexity — and the exhilaration. The resulting event was a 2004 Gala Award winner in the Best Wedding: Budget Under $500 Per Guest category.

After many brainstorming sessions, Kuo notes, an “early spring Chinese garden” theme was selected as a means to transform a standard hotel ballroom into a fully realized event environment. The theme, with its focus on floral, also provided key opportunities for incorporating both customary Chinese symbolism and modern creative touches.

Primary among the more traditional motifs was the color red. Representing good fortune, bright red made its way into the design scheme through the combination of cockscombs, lilies and dahlias used in displays throughout the room.

Gold-on-red calligraphy scrolls, intended to cover the ballroom's bland pillars, took tradition a step further. At the same time, the pillars' surrounding beds of rose petals, which served as a foundation for sprays of phalaenopsis orchids, did double design duty. “We used rose petals for their red color, but also because roses are the symbol of love in Western culture,” Kuo says.

Also serving a dual purpose were bamboo walls positioned outside the entrance to the reception space. The bamboo itself, often associated with newlyweds in Chinese culture, served as an emblem of luck and well-being. The walls formed by the sturdy bamboo stalks also kept out reporters trying to photograph the bride, a member of a prominent political family.

While bamboo walls turned out to be as attractive as they were effective, they were just one of the decor elements that had to be assembled, or altered, in the time and space confines of the Grand Hyatt Taipei's Grand Ballroom.

With another event taking place the night before the January 2004 wedding, The Precious Moment's staff didn't have access to the space until 11 p.m. that evening — not even 20 hours before the start of their high-profile gathering.

Though the bamboo pieces had been prefabricated to fit the room, load-in time found one of the walls needing to be sawed in half to make delivery easier, Kuo recounts. That meant rebuilding on-site, along with inserting iron bars inside each hollow bamboo stalk to ensure that the lightweight walls were stable and secure.

But the work required by the walls was nothing compared to that demanded by the creation of six opulent fresh-floral chandeliers. To create the chandeliers, Kuo's team had to construct hanging points — none existed beforehand — on the ballroom's ceiling light fixtures. The crew used a total of 1,500 strings of glass beads tied with more than 10,000 pink dendrobium orchids, assembled in circular patterns around each light fixture, to create the cascading displays. “Our time was limited, therefore no mistakes were allowed,” Kuo states. “To avoid mistakes, we made a miniature sample in our store to rehearse before the actual construction date.”

The chandeliers turned out to be the highlight of an environment that included many bright spots. Guest table centerpieces, for instance, got a glow from floating candles, which shared space with fishbowls (containing live goldfish, of course), pink peonies and orange peppers. On the wedding couple's two main family tables, two centerpieces made up of 60 bamboo knots tied together in circles with red strings were surrounded by snacks such as dates, peanuts and lotus seeds, symbolizing fertility.

No matter where they sat, guests could indulge in a symbol-rich dinner, featuring braised abalone, steamed cod and beef spare ribs. Celebrants finished off the meal with slices of wedding cake — not a typical part of Chinese nuptials, Kuo says, but, with this particular cake's playful “Leaning Tower of Pisa” design, a nod to the bride's “sense of humor and innovative taste.”

According to Kuo, the most gratifying part of working on the wedding was meeting a difficult, and ever more in-demand, design objective. With many young Asian-born couples marrying in the United States, but returning to their home countries for large-scale celebrations, wedding parties have to walk a fine line. “Out of respect to the parents, but so as not to lose one's identity, many weddings are designed to meet both expectations,” she explains.

For this wedding, “a simple thank-you” from both the newlyweds and their parents was evidence of a goal accomplished. “It meant we were able to make a design that catered to both the young and the old generations,” Kuo says. Not only that, but “none of the table displays was left after the end of the wedding — all of the guests were eager to take a piece of the wedding home for a souvenir.”

Highlights of the wedding menu include: