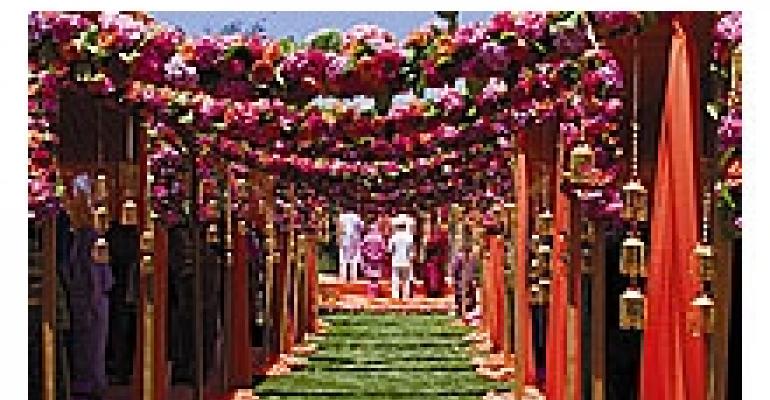 A TIME FOR TRADITION

DOING a little digging into the tastes and backgrounds of the wedding couple is business as usual for most wedding designers. Meeting with religious leaders, consulting with university faculty and watching hours of foreign films generally are not.

Yet that's exactly what the team from La Habra Heights, Calif.-based Fiori Fresco Special Events found themselves doing in preparation for a wedding ceremony they created in conjunction with Barbara Wallace, CSEP, of Corona del Mar, Calif.-based Barbara Wallace Weddings. The reason? “Our client wanted a traditional Indian wedding combining two different religions from separate regions of India,” says Fiori Fresco owner Christopher Aldama. Yet, “We had never had a more in-depth experience of India than a meal at a local restaurant.”

Introduced to his Hindu and Sikh clients eight months before the July nuptials, Aldama and staff began with an immersion in the traditions of the couple's different cultures. “Our hours were spent visiting with priests in both Hindu and Sikh temples and attending weddings of both religions,” Aldama recounts. Such live, in-person research was supplemented with extensive Internet surfing and viewing of popular Bollywood films, he adds.

For the wedding's elaborate ceremony, held on the grounds of a family estate in Irvine, Calif., the Fiori Fresco team complied with numerous Sikh wedding requirements. These included creating a temple in which to conduct the wedding rituals, which Fiori Fresco fashioned with two 20-by-50-foot custom tents swagged with orange silk and outfitted with subflooring, padding and carpeting to accommodate guest seating. Because shoes and bare heads are not allowed in the temple, Aldama says, the event team provided scarves and a shoe station, separated by gender, outside the ceremony site.

Uniting the cultures was the mandap, or altar, which Fiori Fresco hung with an abundance of kalidas, or traditional floral “blessing bells.” Uniting different hues in the vibrant palette of the ceremony — a color scheme based on the bride's ensemble, which was custom-made in India — were the rosewater-soaked pink, orange and fuchsia washcloths guests were given to clean their hands before entering the holy space.

While fulfilling the couple's desire for a wedding that adhered to tradition, Fiori Fresco also created an atmosphere that felt contemporary and took advantage of the sunny outdoor setting.

On the wedding day, for instance, “the bride's family and friends arrived to be greeted by a valet dressed in traditional Indian costume,” Aldama explains. Meanwhile, the groom's family was transported by luxury coaches to the top of a hill in order to begin the customary procession to the bride's home. The groom made his ritual arrival at the wedding site not astride the traditional white horse, but “with a few more horses under his belt — in a red convertible Ferrari,” Aldama says.

In the Sikh tradition, guests began with a light breakfast before the ceremony. In modern southern California style, Aldama notes, that breakfast included a gourmet juice bar and was served beneath bright market umbrellas at tables dressed with fleur-de-lis patterned velvet linen over orange shantung underlays.

Following the ceremony, the merging of the customary and contemporary continued, with guests enjoying a traditional warm buffet lunch. The meal, catered by a local Indian restaurant, featured savory dishes including okra curry, roasted eggplant and curried spinach, which guests enjoyed at tables now dressed with modern hot pink and orange brocade overlays. After the meal, the bride was seated in a hand-carried carriage and transported by the groom's family to — where else? — that hot red Ferrari, which shuttled the couple back to their luxury hotel room so they could relax before the evening's reception.

While creating a ceremony that honored religion, tradition and popular culture was a labor-intensive process, Aldama says the most difficult challenges the event posed were not conceptual but logistical.

“The wedding was located in one of the most exclusive gated communities in southern California,” he explains. “Because of load-in and strike limitations due to homeowners' association rules, the floral for the wedding had to be brought in multitudes of minivans and SUVs. Also, the event's only load-in point was through a 5-foot-wide gate, which was located down a long flight of stairs.”

Setup difficulties aside, Aldama says the experience of designing the ceremony — just one event out of four Fiori Fresco created for the multi-day wedding — was a gratifying one. Delivering a wedding based in a “completely foreign culture,” and being able to “surpass our client's expectations with genuine authenticity,” was deeply rewarding, he says. Having the event nominated for a 2005 Gala Award? That was just icing on the wedding cake.