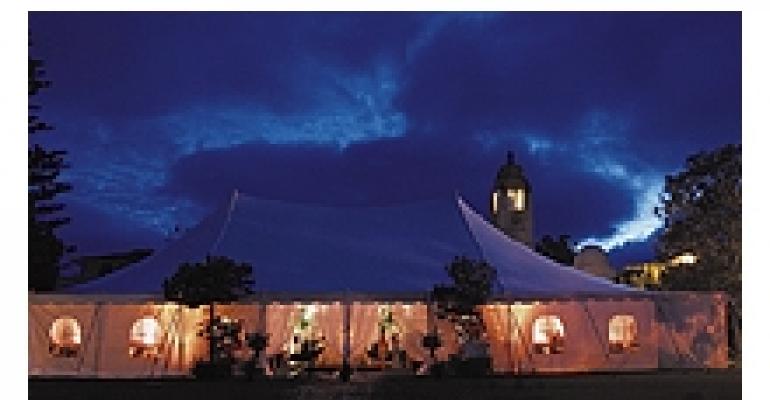 WEDDINGS are one occasion when the right location is a requisite. In the current event market, that often means taking the festivities out of traditional wedding locations such as hotels and private clubs. But with the move into unconventional venues come unconventional complications. In this month's cover story, wedding experts reveal why dealing with the difficulties of unusual wedding sites is worth all the work, for wedding couples and guests alike.

What better site for the wedding of former high-school sweethearts than the place where it all started? So said the clients of Anseth Page-Richards of La Jolla, Calif.-based Creative Occasions with a Personal Touch. But while the idea of staging their nuptials on the campus of La Jolla, Calif.'s Bishop's School held fairy-tale charm, actually making the spring 2005 wedding happen was another story.

“Getting permission to hold the reception at the school was a feat in itself,” says Page-Richards, explaining that it took several rounds of meetings and negotiations to persuade the school, which had never allowed a private social event to take place on campus, to allow the wedding.

Then, in light of parents paying $30,000 a year in tuition for their children, there was the scrupulous care required to protect the school grounds and avoid complaints at all costs. Not only did pipes and electrical cables have to be run under the school quad's grass, and campus bathrooms beautified with candles, flowers and custom guest towels, but a crew of six staffers had to “comb the grass and bushes inch by inch” post-event looking for screws, nails, bottle caps, food crumbs and other detritus. “We did not want any child to go home and say, ‘Wow, there were beer bottles and cigarettes scattered everywhere at school today!’” Page-Richards notes.

If she had the event to do again, the planner says she “would have many, many more ashtrays, trash cans and waste-baskets” to accommodate event debris. But for the most part, Page-Richards — who says she “definitely sees a trend toward alternate venues” and welcomes the challenges — describes the $135,000, 400-guest event as a smash success. “It was hard not to notice the love and joy that filled the area,” she says.

When Deborah Elias' wedding clients requested an event with “a little bit of European influence” to satisfy an international guest list, the Fontenot Grand Mansion in Spring, Texas, fit the bill.

The proprietor of Houston-based Elias Events describes the mansion — a private residence that the owners rent out on weekends for events — as “an Italian villa-style estate” loaded with “Old World charm.”

Elias convinced her clients to go with the venue for their $49,000, 110-guest affair, despite severely limited space that required ceremony and reception to be held in the same room. “In some circumstances, this facility could have an outdoor wedding and indoor reception, thus alleviating this problem,” Elias explains. “But the wedding was in September, {a month of} miserably hot weather in Houston.”

The solution to the problem was a lightning-fast turnaround from a white-chiffon-draped ceremony to a candle-lit, sit-down reception in shades of platinum, lavender and chartreuse, executed while guests mingled outdoors for a brief, fan-cooled cocktail hour.

For all the challenges it posed, the site — privately owned and located outside city limits — allowed for a “pretty significant fireworks show” that would have been impossible at a more traditional venue, according to Elias.

With advantages such as these, it's no wonder that nontraditional venues are cropping up all over Elias' area. “Three of these kinds of facilities — mansions or event facilities specifically built to house events and not families — have opened in Houston in the past year,” Elias says. “Investors are coming in and building these facilities after researching the wants and needs of brides.”

Think wedding venue and a brick-walled factory is unlikely to come to mind. But that's exactly the location that lured one couple seeking an “unusual urban setting” that could accommodate both ceremony and reception, according to creative director Steve Bales of Atlanta-based Bold American Catering.

With its exposed factory fixtures, pipes and beams, and large-scale paintings and sculptures on display, the “event gallery” at Atlanta's King Plow Arts Center hit the right note of hip, urban style to meet his clients' demands while fitting into their tight $20,000 total budget, Bales notes.

Other advantages of the site include 30-foot ceilings from which all manner of decor can be suspended, and the freedom to use open-flame candles as part of the decor scheme, Bales adds. The blank-slate quality of the space, with its large whitewashed areas, also allowed the Bold American design team to incorporate traditional elements requested by the couple — a pew effect created using white wooden chairs, and a baby grand piano — without seeming at odds with the modern feel of the surroundings.

With so many plusses, Bales, associate Leslie Meadows and their clients were willing to put up with some significant obstacles posed by the venue. Chief among these was the uneven concrete flooring — a throwback to the factory's origins — which forced creative placement of the event's mix of buffets, 72-inch rounds, 32-inch high-top tables, 36-inch cocktail tables and a 14-foot bar-height table.

The July event's 180 guests, of course, had no inkling of the setup difficulties the crew had encountered, Bales says. They were much too busy enjoying “a glimpse of Atlanta history” as they celebrated.

A site close to the bride's heart — “She knew, from the first time she went there when she was 16 years old, that she wanted to be married there some day,” says planner Joyce Scardina Becker — the Bernard Maybeck-designed Palace rotunda also lent itself to the wedding's main motif. Explaining that, when they first met, the bride and groom bonded over their shared experiences witnessing solar eclipses, Becker says her team used the building's soaring dome as a backdrop for a design concept based on the planetary phenomenon.

Ideal as the site was for the $108,000 wedding, it wasn't without serious snags. Most significant among these was the venue's very public nature. “Every day, dozens of busloads of tourists are brought to the Palace to marvel at its majesty,” according to Becker. “And although the San Francisco Parks Department willingly rents the Palace for weddings, they provide nothing to ensure privacy for the couple and guests.”

That's where private security guards, well-placed stanchions and three eagle-eyed Events of Distinction staffers came into play, keeping onlookers out and ensuring an intimate atmosphere for the 122-guest event. Dealing with privacy issues also dealt Becker an opportunity to learn from the event's production: “When you bring in portable restrooms to a very private area, hire an additional security person to monitor the port-a-potties,” she advises. “While we put signs up to indicate that these restrooms were for wedding guests only, they were unfortunately ignored by many tourists.”

Another California couple — clients of Napa, Calif.-based Sasha Souza Events — looked to the earth, rather than the heavens, for their winter wedding. Their site of choice, Hans Fahden Vineyards in Calistoga, Calif., offered the unusual feature of a wine cave dug into a formation of 4-million-year-old volcanic ash, according to planner Souza. The cave itself offered one-of-a-kind indoor event space for the $200,000 wedding, she notes.

With its 400-pound Douglas fir doors, bare, unfinished walls and unusual “T” shape, the wine cave was a conversation piece all on its own. Add a 60-foot-long T-shaped table positioned beneath a custom-built arbor hung with roses, carnations, amaranth, ivy and ribbon accents, and the cave became the setting of an unforgettable celebration, Souza says.

But the festivities could have been ruined by the cave's major drawback. “The issue with this particular cave in the rain is that the first 15 feet become unstable space for guest seating because of leaking,” Souza points out. Normally, her crew contends with the problem by building an internal “rib” inside the cave and using it to support visqueen that in turn directs water down the walls and into troughs running along the cave's sides. But at this February 2005 wedding, with rain falling outdoors, the cave sprung leaks in places that it hadn't before. “There was a point in the hours prior to the wedding when it was leaking on the table,” she says. Her team made a late-stage scramble to extend the visqueen setup, and added draping to disguise the material — even in places where there was no leaking, to create a uniform appearance — to save the special occasion.

The hard work paid off. The wine cave offered the event's 85 guests “something they cannot find in most of their hometowns,” Souza says. “And the experience they enjoyed was once-in-a-lifetime for them.”