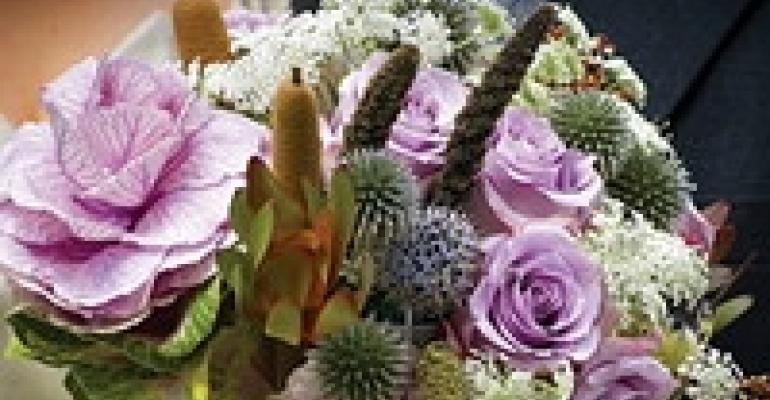 “‘The more rust the better’” might be an unusual decor mantra for a bride, but it's a phrase Joanne Hulme heard many times while designing an October wedding. To give the bride the vintage, flea-market feel she wanted, Hulme — owner of Joanne Hulme's Creativity in Philadelphia — turned to decoupage, innovative floral and, naturally, flea markets. The result was decor that mixed items from the past with elements from the present made to look vintage through Hulme's handiwork.

EVERYTHING IN ITS PLACE

The place card table served as a focal point and set a historical scene. Hulme placed moss-green linen beneath a hand-cut wooden tabletop decoupaged with images and text from an 1888 Bible as well as magazines from the same era. Yet, “No books were harmed in the making of this tabletop,” Hulme says, “as all were photocopies.” Hulme then applied quotes from the wedding vows to the tabletop in brown vinyl lettering as a final touch.

The centerpiece for the place card table was a wild floral combination of brambles, vines, weeds and wildflowers complemented by a few cultivated flowers. An old wooden window frame hung above the floral while white pumpkins served as rustic accents. And for a guest book, Hulme turned to a carved leather photo album from the 1890s. She kept the original photos and added a layer of frosted paper to each page for guests to sign. A second flea-market-find photo album was cut up to serve as the place cards themselves.

FAVOR ME WITH A FAVOR

Thanks to a writer bride and theologian groom, love of words became the focal point for a crafty, vintage-looking favor. Hulme purchased small boxes for a thrifty 50 cents apiece and refashioned them to look like books. “My grandson and I would sit for hours at my kitchen counter, and he would stain then pass the ‘book’ to me, and I would apply a one-coat verdigris finish and gild the ‘pages,’” Hulme says. Hulme then glued a vintage keyhole to each book before wrapping a pair of fresh figs, a favorite food of the bride and groom, in each box.

The wild landscape of the 160-acre horse farm where the wedding took place contributed to the day's back-in-time feel. Stone walls, leveled terraces and a gazebo provided unusual and scenic backgrounds to photographs of the wedding party.

Bouquets, too, had a more-natural-less-cultivated feel. The bride gave Hulme free rein on the bouquets, which resulted in an unusual mix of kale, berries, blue thistle, small fresh peppers on the vine, bouvardia and purple roses. Hulme says: “It was a great match when the bride lifted her gown to reveal purple tights, a last-minute surprise to us all!”