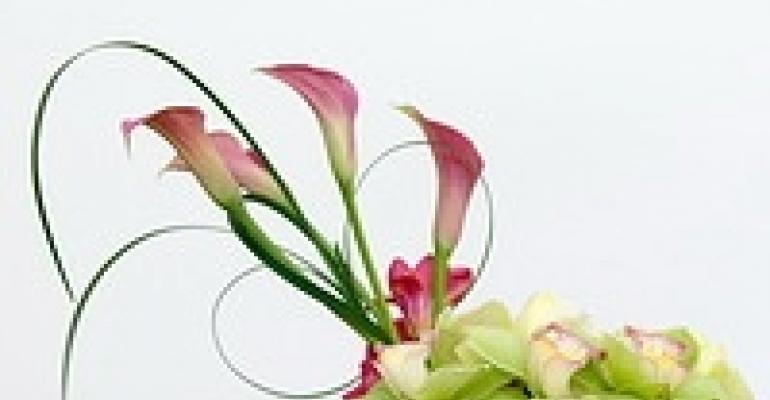 Massive, showy floral displays are being replaced by intimate, detailed arrangements at weddings today, according to leading floral designers. Many brides are turning to flowers such as Phalaenopsis orchids, which thanks to their striking shape provide drama with only a few stems.

Mark Held, head of Sherman Oaks, Calif.-based Mark's Garden and longtime florist for the Academy Awards Oscar Ball, says brides today prefer fewer, but larger, flowers. And he advises sticking with one type rather than mixing many flowers together. “Today’s brides want a cleaner, more stylized look,” he says. “Orchids are very popular—especially mixed with an assortment of exotic leaves.”

Mark Herrier, with Fleurs du Jour of Santa Monica, Calif., creates a personalized look with exotics such as orchids, succulents and thistles, along with what he calls "sprigs and twigs"--unusual branches or bush foliage used as the focal point rather than the accent. “These days it is not unusual to use only flowering branches for the entire arrangement,” he says, noting that he likes to incorporate the uncommon, such as wild green raspberry brambles and orange kumquat branches into his designs. “It is an elegant, architectural look, and costs much less than filling the same amount of space with densely packed flowers.”

For brides on a budget, Denver-based Newberry Brothers Greenhouse and Florist will mix feather plumes with flowers. "Brides love the romantic feel of them when they are done in a tasteful way,” notes Newberry's Emily Tolve. And while feathers are initially expensive to purchase, they can be used repeatedly and simply rented to the client. Another budget-stretcher: Newberry Brothers will combine a few Phalaenopsis stems with a gleaming mix of candles for a dramatic centerpiece.

And don’t forget the water. “These days, how we design an arrangement below the waterline is almost more important than what we do above it,” Herrier says. “Because today is more about personalized, detailed work, we are able to design more architecturally, with more creative freedom—and with a lot fewer flowers.”

For more, see the March-April issue of Special Events.