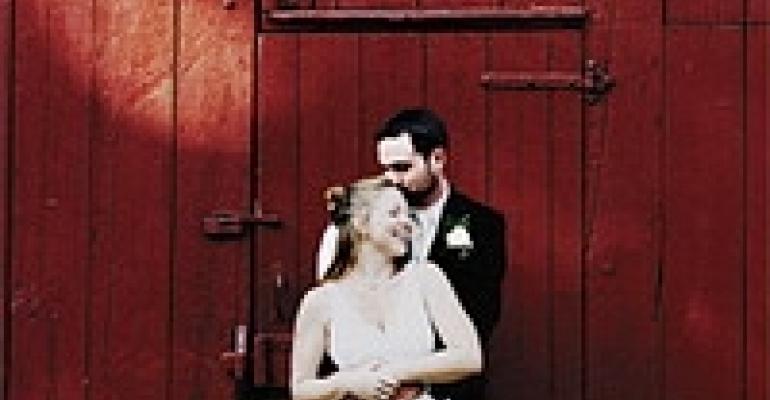 Weddings Get Personal With Signature Motifs

Weddings are still formal affairs, but lately they're getting a giant pop of personality. These days couples might nix the traditional white cake and opt for chocolate frosting colored navy blue, or forgo cutesy favors and instead hand out whoopee cushions. Here, four wedding professionals tell us how they helped couples toss tradition and make their wedding days distinctly their own.

An “architecture buff” bride wanted her wedding to have art deco style, says Sharon Sacks — president of Sacks Productions in Calabasas, Calif. — which a famed building and Sacks provided. In fact, the first art deco building constructed in Los Angeles served as the venue: the landmark 1927 Oviatt Building. The penthouse provided the space for the elegant wedding ceremony while the building's Cicada restaurant housed the stylish reception.

Rather than compete with the art deco surroundings, Sacks opted to subtly enhance them. She turned to cymbidium orchid florals, ruched sheer silk organza table linen and mirrored chargers “so that the gold-leaf ceiling was reflected before the eyes of every guest,” she notes. The wedding announcements also mimicked art deco style, while the cake was an art deco work of art. The bride provided the chef a Lalique glass pattern, a brand made famous during the art deco movement, as the basis for the wedding cake design. The final product echoed the decor of the Oviatt Building itself, which houses the largest Lalique collection in the world and features windows and light fixtures made of the famous glass.

When a bride from New Orleans and a pilot groom married, VP Events in Westlake Village, Calif., helped them marry their personal interests as well. VP president and CEO Mary N. Litzsinger, CSEP, developed seamless decor at the Santa Barbara, Calif., wedding that acknowledged the couple's individual interests. To pay homage to the groom's love of flight, for example, the groom's cake took the shape of a plane, and compasses served as escort cards. The engagement photo of the couple, blown up and hung behind the escort table, made a declaration of love in navigation terms with the phrase “You are my true north.”

And while the bride might have been the groom's true north, the wedding reflected her New Orleans heritage. In fact, the bride is so fond of her French-influenced home city, she has a fleur-de-lis tattoo on the back of her neck, a symbol that inspired the wedding decor. The fleur-de-lis appeared on champagne glasses, cocktail napkins, the cake, the cake server and vases. Even the cookies took the shape of the famous French symbol. The theme continued with both subtle touches, such as beignets and chicory coffee, as well as grand gestures, such as the bride and her mother carrying parasols at the end of the wedding ceremony — another nod to Big Easy customs. And in a final marriage of the bride and groom's themes, the wedding logo featured the groom's compass rose encircling the bride's fleur-de-lis. This logo appeared on save-the-dates, invitations and even the dance floor gobo.

The gobo melds the bride's fleur-de-lis and the groom's compass rose motifs.

Despite the many themed elements, the wedding wasn't a theme free-for-all. Litzsinger was careful not to overdo the motifs. “I believe you have to look carefully at each introduction of a personal touch and try to visualize it from ‘the big picture’ perspective,” she says. This thinking led to nixing a fleur-de-lis charger. “Although we found it to be a pretty piece, we determined that it was just too much,” she says.

THEY DID IT THEIR WAY

The Finishing Touch — with operations in the New York metro area and London — has a knack for helping couples put their quirky twists on wedding day festivities. For one wedding, an outdoors-loving, artsy couple opted to hold their ceremony in a field at the Smithtown Historical Society in Smithtown, N.J., with the reception at the property's barn. The graphic designer bride designed the invitations herself, as well as a cheeky wooden stamp to decorate a whoopee-cushion wedding favor that proclaimed: “Whoopee! We're married!”

To rein in the budget, the couple decided to bring in the family to assist with the under-$20,000 wedding day filled with do-it-yourself projects. Cotton, ribbons, garlands, tin pails filled with roses and sheaves of wheat, and banners of handmade paper adorned the barn reception area. The couple also went for a natural look for their place cards, staining balsa wood in different colors and then stamping the cards with guests' names and table numbers. Centerpieces alternated between bouquets of red and orange roses — purchased wholesale — and bowls of cranberries and candles floating in water.

For a Fair Haven, N.J., couple who Candice Benson, the Finishing Touch's senior event consultant, deems “total beer enthusiasts,” deciding on a wedding theme was easy enough: just highlight their mutual love of beer. The first hint for guests of the festive theme consisted of save-the-dates in the shape of coasters. Next, a hops image made its way onto invitations, programs, place cards and wedding favors of personalized beer glasses and beer labels on a brew made by the couple. Along with the hops image, beer bottle caps decorated the place cards, and hops and wheat served as floral in beer stein centerpieces. For a final flourish, the couple named the dinner tables after their favorite microbrews.

Despite the nontraditional theme, Benson had few fears. The couple “wanted to keep it upscale and elegant, so I was not worried,” she says. But one of the couple's requests did cause Benson concern: a band playing heavy metal. Benson was afraid that guests might cringe at the raucous music, so she suggested a compromise: Have a DJ play “elevator music” versions of heavy metal songs during cocktail hour. “It was fun to see the looks on guests' faces as they realized they were listening to the violin version of ‘Hells Bells,’” she notes.

WHERE THE HEART IS

When Jessica Lussier McLean, event producer at Chicago-based Weddings by Blue Plate, decided to have her wedding in Chicago, she knew her parents would be “just a little disappointed that I wasn't having the wedding at home,” she says. To honor her parents' Cape Cod home in Massachusetts where Lussier McLean grew up, she decided to “bring home to Chicago for one day.”

Lussier McLean infused her downtown Chicago wedding with Cape Cod elements “without being kitschy.” She began with the stationery, choosing a sophisticated modern design by Claudia Calhoun with a traditional engraving that allowed her “‘preppy’ color palette of lime green ink on navy blue stock to pop.” Pavel Juricek, head designer of Chicago-based Kehoe Designs, helped the bride develop a modern take on her Cape Cod theme — not the traditional lighthouse and anchor decor, she notes.

But nothing reflected Lussier McLean's hometown more than the food, inspired by her father's historic Cape Cod restaurant, the Captain Linnell House. Because Lussier McLean and her fiance wanted to offer guests “more fun and flavor than a plated dinner involves but a more elegant experience than a buffet,” they opted to downsize her father's dishes and serve them at stations scattered throughout the reception area. The small plates sampler included Lussier McLean's favorite duck entree as well as dishes that featured New England ingredients such as scallops, halibut, beets and sweet corn. As for the cake, the bride opted for a six-tier chocolate masterpiece, frosted in navy blue icing and encrusted with sugar “pearls.” She admits the color choice was “a bit extreme” but adds, “the focal point that it created in the room was unforgettable and, of course, delicious.”