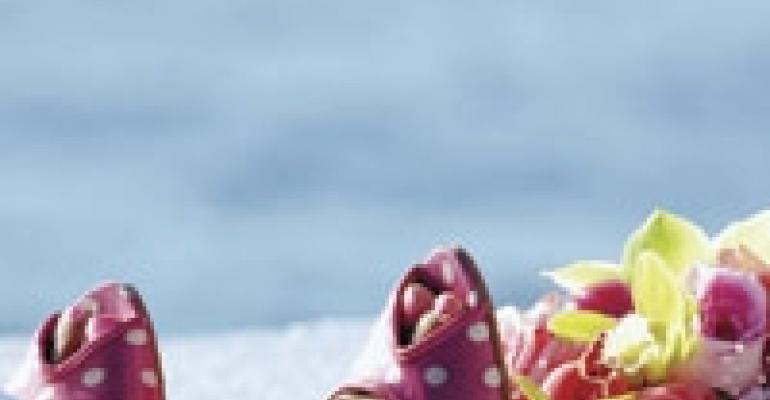 Weddings Put on the Glitz with Showbiz Style

Want to wed like a rock star? Or borrow a wedding theme from the big screen? There are many ways to put some showbiz glitz into a wedding. Here, wedding experts tell us how to put on the ultimate big-day show — and provide tips for those without blockbuster budgets.

Inspiration Strikes: “The bride loved the icy blue colors, white dance floor and frosty looking centerpieces” of songstress Christina Aguilera's 2005 winter wonderland-themed wedding, Majcher says. To give her that look, Majcher went as “glimmery” as possible, opting for glitter and shine with the help of plexiglass risers and blue lighting accented with glass and silver pieces.

The Big Day: The result, according to Majcher: “Crazy fabulous.” Scores of mini chandeliers over food stations, giant flocked branches in the corners of the tent, and disco balls over a plexiglass-covered pool created a glitzy, romantic mood. Smaller details also set the tone, such as icicles, decorative snowflakes, flocked greenery on the chandeliers, and strings of white lights on birch trees; blue uplighting gave the scene a “really magical, frozen feel,” Majcher says. And for added drama, the LED lights changed color when the clock struck midnight.

Lotta Look, Less Money: Use glass and candles to mimic the Aguilera look for less, Majcher notes. “It can be relatively inexpensive to use tons and tons of votives and all kinds of sizes of candles to create a magical look,” she says. For added bang-for-buck, Majcher also recommends nixing the white carpet and going for simpler blue uplighting. On top of that, cylindrical vases filled with battery-operated white lights, as well as clear, frosted and silver ornaments, can create an icy look without burning through the bucks.

SOMETHING BORROWED, SOMETHING PINK

Inspiration Strikes: The event tracked the rage for the color pink, seen in the weddings of actresses Portia de Rossi and Elizabeth Hurley and singer Gwen Stefani.

The Big Day: With the traditional white weddings seeming, well, traditional and white, many celebrities have been adding pops of personality to the staid scene. De Rossi and Hurley donned pink wedding gowns, while Stefani dyed a portion of her gown pink. In a nod to this trend, Verge says, the bride “walked down the aisle in a pair of hot pink polka-dotted peep-toe pumps.”

Not that the pink stopped there. The Pink lotion line from Victoria's Secret — its fashion show is a not-to-be-missed event for the bride — served as take-aways and powder room supplies. Other theme-appropriate items included pink linen, pink cupcakes, and an extensive candy buffet with pink-and-white swirl pops, watermelon Gummi bears, and gumball machines with pink gumballs.

Lotta Look, Less Money: Sticking to a central color scheme costs less, Verge notes, by eliminating the likes of pricey overlays in complementary colors. Another way to save money with a one-hued wonder is to extend the color theme to specialty cocktails and nix the full bar.

AND THE AWARD GOES TO …

Inspiration Strikes: The Kodak Theatre itself, which hosts the ceremony celebrating the best celluloid has to offer, served as the June event's inspiration. Weiss dreamed up a theatrical wedding complete with dance numbers, famous film clips and even some theater magic. The big show landed him a Gala Award in January.

The Big Day: A pre-wedding teaser video played on a projection screen, channeling Hollywood glamour with clips from famous films with wedding scenes. Next up was a ukulele player strumming “Over the Rainbow” from the classic “The Wizard of Oz.” The Hollywood theme continued into the reception with tables named after such movies as “Father of the Bride” and “Bride of Frankenstein” in lieu of numbered tables.

But a trick of lighting helped stage the showiest moment of the evening. The bride and groom appeared in silhouette behind a scrim to perform the first dance, which included dramatic lifts and leaps “well beyond what anyone thought the groom could muster,” Weiss says. In a movie-worthy switcheroo, the scrim lifted to reveal the bride and groom, who then introduced the professional dancers masquerading as the happy couple.

Lotta Look, Less Money: While the Kodak Theatre doesn't come cheap, aspects of this wedding do. For example, the signage showcasing the dinner tables' movie-inspired names consisted of simple DVD cover art from wedding movie classics such as “Four Weddings and a Funeral.” The video composite of great wedding scenes wasn't a pricey endeavor either — a good video is less a financial commitment than a time commitment, Weiss notes.

Inspiration Strikes: Rather than being inspired by TV, this wedding aired on the small screen itself in January 2008, which caused an unusual set of pressures. “We knew there would be a huge national TV audience who would be judgmental of everything they saw,” Wallace says. As a result, “We wanted this to be a wedding worthy of the buildup it was getting week by week during the TV season.” So Wallace orchestrated eight distinct experiences for guests to enjoy.

The Big Day: The grounds of a Tuscan-style villa in Orange County, Calif., provided the backdrop for the eight different experiences. Guests walked through environments that included a station area offering trendy, fruity sodas, the garden ceremony, a tented dinner, a sleek lounge and a dancing area, each with a distinct style. For instance, the romantic dining tent included white silk draping, white carpet, rococo gilded mirrors, and centerpieces of pale blush and yellow roses in rusted wrought-iron stands with chunky candles, Wallace notes. In contrast, the snazzy lounge area was all sleek white furniture and blue uplighting.

The TV audience certainly fell for the event, as Wallace sees a spike in hits on her Web site every time the wedding episode airs. “In fact, the very first time I appeared on the show and the bride mentioned my name very clearly, I got 185 hits that day,” she says.

Lotta Look, Less Money: To re-create this look without re-creating the big bill, Wallace recommends sticking with the idea of multiple experiences but reusing some decor items in different spaces or revisiting a space for more than one experience. She also suggests replacing silk draping with a less expensive fabric and forgoing silk chair covers in favor of chiavaris wrapped with sashes. And while Wallace's wedding had large mirrors, columns and crystal sconces, those elements aren't absolutely necessary. As she says, “It does not have to be quite as elaborate to be effective.”