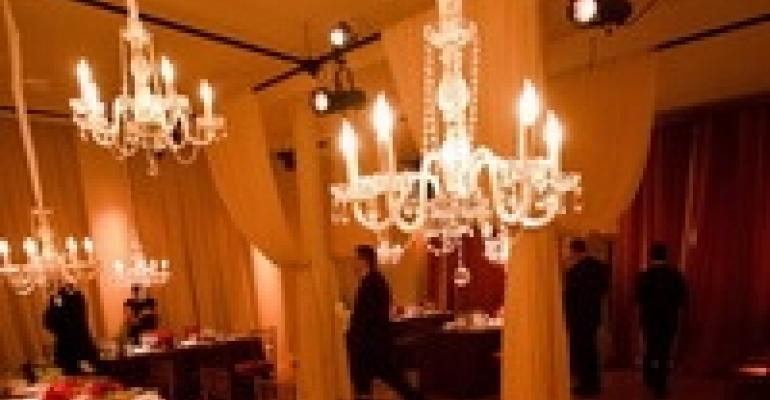 WEDDING WATCH: Owner Sarah Pease, who plans not just wow weddings but also marriage proposals that are events in themselves (she recently joined forces with jewelry company Blue Nile to stage a nationally televised proposal in New York's Times Square), says that in her market, “October is the new June” for weddings. “June is hot, the guys don't want to imagine themselves in tuxes, sweating bullets, the girls in their giant gowns,” the planner notes. She's also tracking a big boom in demand for top-of-the-line lighting. “If we want to make a big impact in a room, lighting does it” better than anything else, she says.

FOLLOW THE MONEY: “People are splurging on their venue, looking for a place that has the personality they want, without having to dress it up a lot,” Pease says.

PERSONAL TOUCH: Personalization is the watchword for weddings in 2011, and Pease is a genius at creating totally unique touches for her clients. Some of her recent favorites include “bar trivia”-type cocktail napkins printed with fun facts from the couple's history and courtship, and a “New York Wedding Times” newspaper featuring photos and stories about the couple and their wedding, placed in front of visiting guests' hotel doors in the wee hours following the reception. (Guests staying elsewhere received electronic versions of the newspaper via e-mail.)

WEDDING WATCH: Contrary to the L.A. wedding scene, Chicago-area weddings are trending toward the “more traditional” with “seated dinners,” says president Ali Phillips. She is also seeing more band-DJ combos, along with photo booths and mobile flip-book studios. Topping trends is a passionate embrace of authentic local foods like Chicago-style hot dogs and Garrett Gourmet Popcorn (an Oprah “favorite”). On the way out: “Many long toasts.” Taking their place: “More dancing and celebrating with friends and loved ones.”

FOLLOW THE MONEY: When it comes to budgets, “My clients right now are prioritizing the food and entertainment around their wedding. Not that they are making the menus fancy, but they are making them fun,” Phillips says, citing the example of “cute soups served in pumpkins.” As for favors, she says clients are saving money by forgoing doodads and spending instead on late-night or take-home food.

PERSONAL TOUCH: Phillips says clients are wild for initials: “They love monograms still and always will!” She also likes to include a personal note from the bride and groom in the wedding programs, and incorporate favorite foods into the menu: “We recently had a caterer do the bride's mother's carrot soup, and we put that in the menu card and on the back included the recipe for everyone to take home and enjoy.”

WEDDINGS WATCH: Big, lavish, high-end nuptials are the specialty of owner and president Sharon Sacks, whose wedding clients have included celebs Jennifer Lopez, John Stamos and Khloe Kardashian. But these days, she says, clients are moving away from sparkle and spectacle, and asking for weddings that exude “warmth, relaxation and comfort.” She notes a trend toward smaller, more intimate ceremonies, followed by fun, not-too-formal “parties” rather than traditional receptions. Her recent weddings have featured open-air dining, linen-less wood tables and “an abundance of floral,” but with a “natural feeling instead of a pavé look.”

FOLLOW THE MONEY: Sacks says 2011 clients are allocating the bulk of their wedding budget dollars toward “music, floral, lighting and food,” and cutting down on guest counts instead of cutting back on high-quality event components.

PERSONAL TOUCH: Her contributions toward the push for personalization include the unexpected use of personal photographs (imprinted on 20 different cakes served at individual dining tables, for instance) and the incorporation of decor that communicates the couple's personalities and values — as in the case of the handpicked, symbolic Indian rugs she used to create the aisle and altar of one recent wedding. “It's all about tapping into what's really important to the bride and groom,” she explains, “being available to them, delivering service, service, service.”