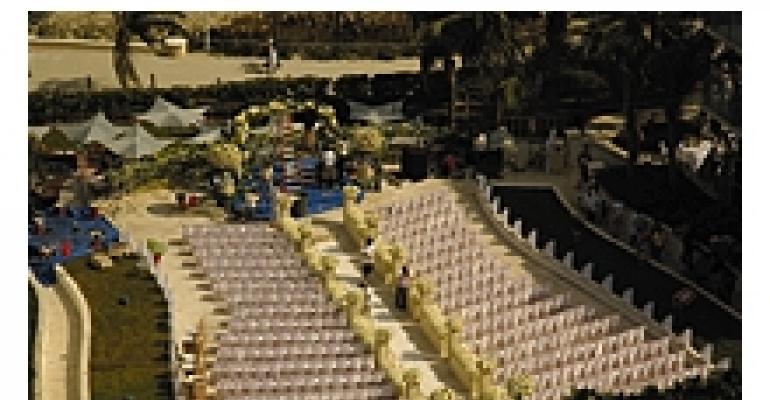 EVERYONE has heard of the “whirlwind romance.” But a “hurricane wedding”?

Lauren Fine, design consultant with Miami-based Grande Affaires, watched as Hurricane Wilma ripped through her best-laid plans for an elaborate wedding for nearly 400 guests only three days before the welcome party. Yet the superb teamwork and unswerving dedication of her team helped the event breeze over obstacles.

Only a week before the wedding, event veteran Fine had her plans nailed down. “I could have taken my book and given it to a monkey, and the event could have been done,” she says.

Then Hurricane Wilma made landfall in southeast Florida on Oct. 24. The storm led to more than a dozen deaths in Florida, knocked out power for 6 million customers and wreaked an estimated $9 billion in damages.

For the event team, Wilma meant virtually no telephone communication (landline or cell), no gasoline to fuel travel or deliveries, early-evening curfews, and no electricity at the host hotel. The plans for delivery of elaborate decor, linen, place cards and other event supplies were shattered: “We didn't know where anything was,” Fine relates.

Yet in the face of catastrophe, she and her team kept their worries to themselves. “You have to be there for your client,” Fine says. “You don't want to give them any more grief or stress. So, you don't look at the big picture. If you did, you'd say, ‘Oh, my God!’ So you just keep going.”

Wilma hit Florida on a Monday, with the welcome party scheduled for Thursday at the Ritz-Carlton Key Biscayne hotel. But with no power at that property on Wednesday, Fine and her team — including Grande Affaires creative director Robert Torres — spent the day driving around the area with the scant gas they had left in their own cars to find new venues. At 4:30 that afternoon, the team decided to change the host hotel to the Ritz-Carlton South Beach (Miami), where power was still on. At 8:30 that night — “sitting in the {Key Biscayne} hotel lobby with candles burning” — the team decided on the master plan to change venues for events beginning the very next day.

With the clothes on her back and a toothbrush bought at a convenience store, Fine checked into the new host hotel and went to work.

Friday's rehearsal dinner was originally planned for Miami's stately Vizcaya Museum and Gardens. But with the venue flooded by Wilma, Fine and team pulled decor planned for that event and used it for Thursday night's welcome party, itself relocated from the Grand Bay Club beach club in Key Biscayne to the new host hotel Ritz-Carlton South Beach. The Grand Bay Club then served as the new site for the rehearsal dinner.

As if these changes weren't enough, the day before the wedding ceremony, the groom decided he wanted to move the ceremony from the beach to the hotel's pool deck.

Despite the tremendous challenges facing them, Fine's vendors found ways to get her supplies to her. When even stalwart courier service FedEx couldn't deliver the custom linen planned for several events, event team partners including Miami's Nuage Designs and Atlas Party Rental, Boynton Beach, Fla., managed to truck it in. On Friday morning at 7:45 a.m., when trucks from Pompano Beach, Fla.-based Panache Party Rentals pulled up to the Ritz-Carlton South Beach to install the bridal lunch for 120 women, “I literally had tears in my eyes,” Fine says. “Gas was a major issue — besides needing it for the trucks, employees had a hard time getting to work with only a few stations open and six-hour gas lines. Everyone was so awesome.”

The vendors were not only awesome, but practical. Because the Panache facilities didn't have power or water to wash their stemware, the company delivered it used from a prior event, with the Ritz-Carlton stepping in to wash it.

Of course, no amount of ingenuity can take the place of the hard work that all the changes required. Although the hotel allowed moving the wedding ceremony to its deck, including permitting an all-day installation, management insisted that the private ceremony not disturb its paying guests. “We had to bring in trees to block off the ceremony from the rest of the pool area, so we didn't disturb {hotel} guests on Saturday,” Fine recounts. “We had to create pathways for the guests to pass through the setup area if they wanted to get by. We weren't allowed to walk through the pool area.”

Unaware of the behind-the-scenes drama, guests enjoyed a welcome party with decor honoring the bride's New York hometown and the groom's New Mexico heritage — “a ‘New York meets Santa Fe’ night,” as Fine puts it. Friday's white-on-white bridal lunch featured real linen tablecloths and sunflowers, while the rehearsal dinner offered a tropical chic look with orchids and candles. The wedding ceremony featured a dazzling floral arch stretched across a vista of the ocean.

Although the event team knew that a few elements were missing — the chair backs for the chiavaris at the welcome party never arrived — the guests never missed them. In the end, the massive revisions nearly tripled the cost to her client, but the result was a dream event. “The groom told us that we walk on water,” Fine recounts.

The ability to walk on water lies largely in believing you can do it.

“We never thought about canceling,” Fine says. “It never crossed our minds. We knew we could do it, and we did it — but not without the support of so many people. I have never been prouder of my crew and my industry as this weekend. In the middle of everything — some people had holes in their roofs and could see the sky overhead in their bedrooms — everyone came together and made it all happen.”